Here is a summary of all Fortress Newcastle Project activities from 2020 to 2021 to keep everyone in the loop.

“Newcastle Fortress” is the description used by the Australian Government for its defence installations and operations established to protect Newcastle from enemy attack during World War II.

Australia protected only two sites in this way; Newcastle was one of them because it was the site of the nation’s armaments manufacturing industrial complex.

The official records of the “Newcastle Fortress” are lodged with the National Archives of Australia (NAA). A sample listing is below.

The Birth of the Fortress Newcastle Project

In early March 2020 representatives from the University of Newcastle’s Cultural Collections and the Newcastle Industrial Heritage Association (NIHA) met to discuss potential collaboration in a Fortress Newcastle project involving a number of heritage groups.

Some of these groups were activily involved in safeguarding World War Two era defence sites originally established to protect Australia’s industrial heartland, and so had a great working knowledge of their operations.

Later that same month, COVID19 arrived, and we were again forced into a “fortress mentality” to protect our home, therefore Fortress Newcastle had re-emerged in the form of a war against a virus.

This inspired us to prepare a short video and Hunter Living Histories article called Newcastle: A Call to Action. This was achieved with the assistance of University alumnus Bob Kear, and his fellow members at the Newcastle Industrial Heritage Association. Greg and Sylvia Ray also kindly provided photographs to illustrate the article.

Fortress Newcastle: A Call To Action

The First Meeting of Fortress Newcastle

The Fortress Newcastle groups met for the first time, over zoom, on the 22 April 2020.

Everyone agreed it was very important to tell the story and explain what “Fortress Newcastle” was all about, as well as what we were trying to achieve through the Project.

This introduction was published as The Newcastle Fortress Project on the 12 June 2020. An introductory film was also produced using interviews recorded by Glenn Dormand and Tony Whittaker of Carnivore Films; the film makers currently working with the Cultural Collections/Hunter Living Histories team on the Stories of Our Town Project.

During 2020 field trips to various sites were organised through the NIHA to better familiarise everyone with the remnant installations.

In October 2020 a Sydney based historian and heritage consultant, Peter Hobbins, in collaboration with University of Newcastle, industry and community partners, helped the NIHA draft and later submit a grant application to the Commonwealth Department of Veterans’ Affairs ‘Saluting Their Service’ grants.

The Fortress Newcastle groups met in the grounds of the University of Newcastle’s University’s Delpratt Cottage, home of the NIHA, on the 10 November 2020.

It was decided that video histories with the surviving veterans, now in their late eighties and nineties, be made as soon as possible. A task for which Glenn and Tony took up immediately. 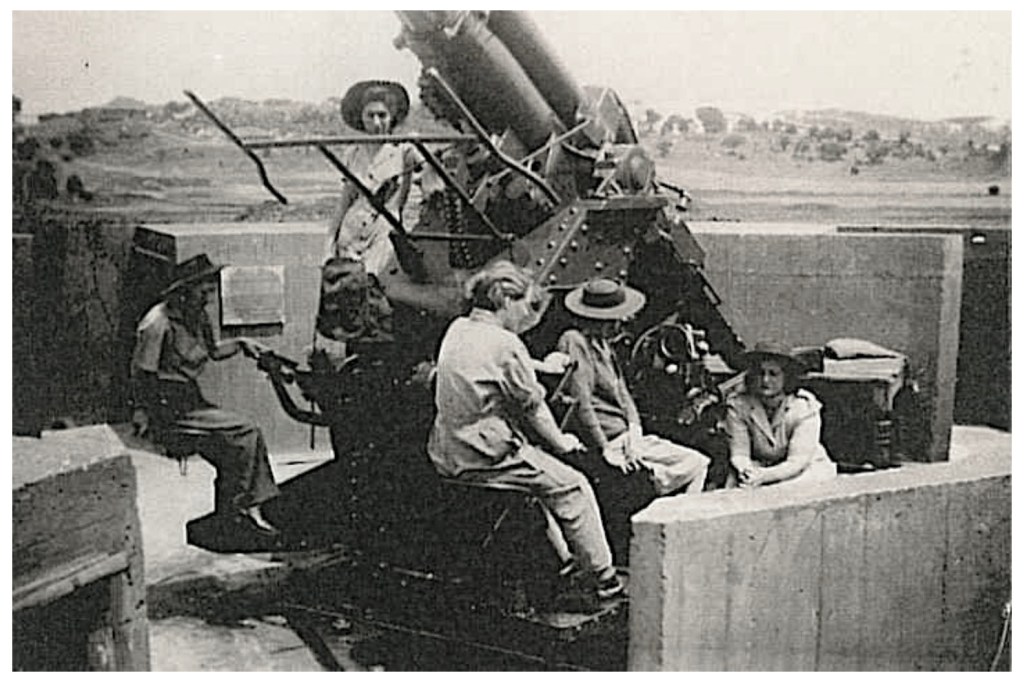 On the 11 February 2021 we submitted our “Saluting Their Service” Grant application. We also submitted another application to the Newcastle Port Community Contribution Fund (NPCC).

Both grants were successful, but not for the full amounts, so we scaled back our original objectives to better meet the budget constraints.

Our main objectives were to now make a film telling the story of Fortress Newcastle through the memories of veterans, and to prepare a set of high quality exhibition panels and educational materials to accompany an exhibition.

As of September 2021 we are making good progress.

(2) Fortress Newcastle Film. The second major outcome is a video documentary which involves:

A team meeting will be held at Delprat’s Cottage as soon as we can. In the meantime, stay safe.