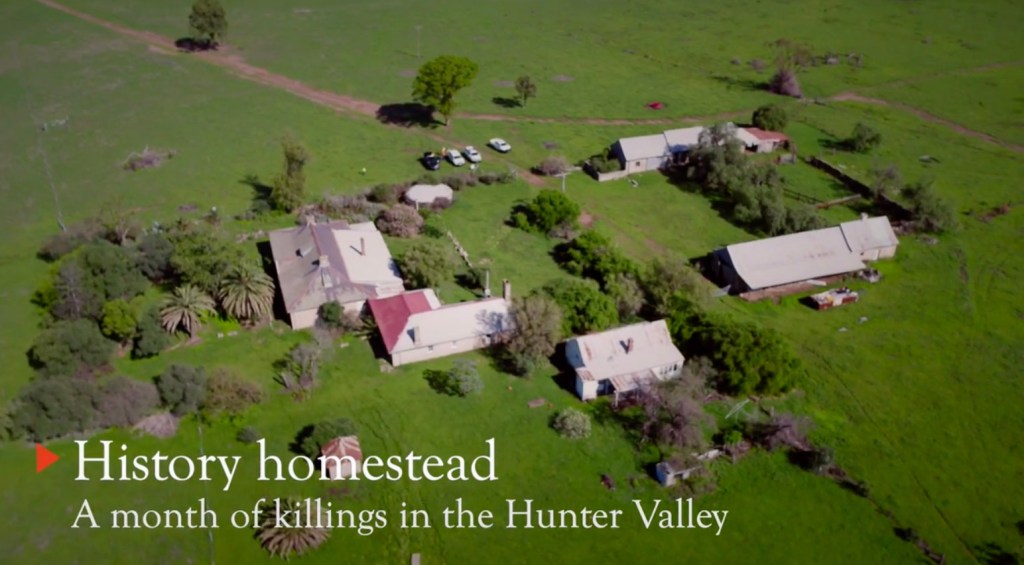 A Month of Murder in the Hunter Valley Video Series

A Month of Murder in the Hunter Valley is a four part video series presenting the Wonnarua People’s stories relating to the Ravensworth Homestead in the Hunter Region, and its purported use as a staging post for atrocities against the First Nations people in the area.

Aboriginal people are now voicing their concern at a plan, by the Glencore Mine, to relocate the Ravensworth homestead to another location.

They wish to share their stories, transmitted through the generations, to the wider community.

Mr Shoebridge MLC (Greens Member of the NSW Legislative Council) is supporting the Plains Clan of the Wonnarua People who have lodged a Section 10 application to protect the land from destruction by the proposed open cut mine under the Commonwealth Aboriginal and Torres Strait Islander Heritage Protection Act.

The films feature interviews with archaeologists and traditional owners.

In August 1826, 195 years ago, 14 Mounted Police attacked a camp of Wonnarua people in retaliation for a raid on a colonial property.

At least 18 Aboriginal men, women and children were killed, whilst two were captured.

Media reports at the time celebrated these killings and called for further revenge attacks against First Nations people.

All four videos have now been released, to coincide with the these events 195 years ago, so we can listen to what First Nations people have to say.

The video series can be viewed below.

These videos contain images and descriptions that some viewers may find disturbing. Viewer discretion is advised.

1 August 2021:
The execution of ‘Jacky Jacky’ and the following acquittal of Lieutenant Lowe

12 August 2021:
The capture and execution of up to 7 Aboriginal men by the Mounted Police

28 August 2021:
Dozens of Mounted Police are sent by a Magistrate
to hunt for Aboriginal men believed responsible for a retaliatory attack on a farm

Webinar held Monday 11 October 2021, featuring David Shoebridge MLC, with Scott Franks, sharing with us the fight to protect his country, Aish Cowgill for talking about what it was to read these historical records of murders of First Nations people and Bill Code, film maker for working out how to tell these important stories on such tight deadlines and budget.

More on the history of the Ravensworth Homestead:
https://hunterlivinghistories.com/category/architectural-design-innovation/ravensworth/