Lachlan Wetherall, in a digital project similar to his historical maps visual index, where he created a visual index to hundreds of our subdivsion plans located in flickr, has now put together another index to the aerial photography that has been recently digitised by our volunteer Jessica Waugh in the GLAMx Digitisation Lab from the University’s Photographic Archives. Over 700 aerial photographs digitised can been found in our flickr album Aerial Photographs New South Wales. 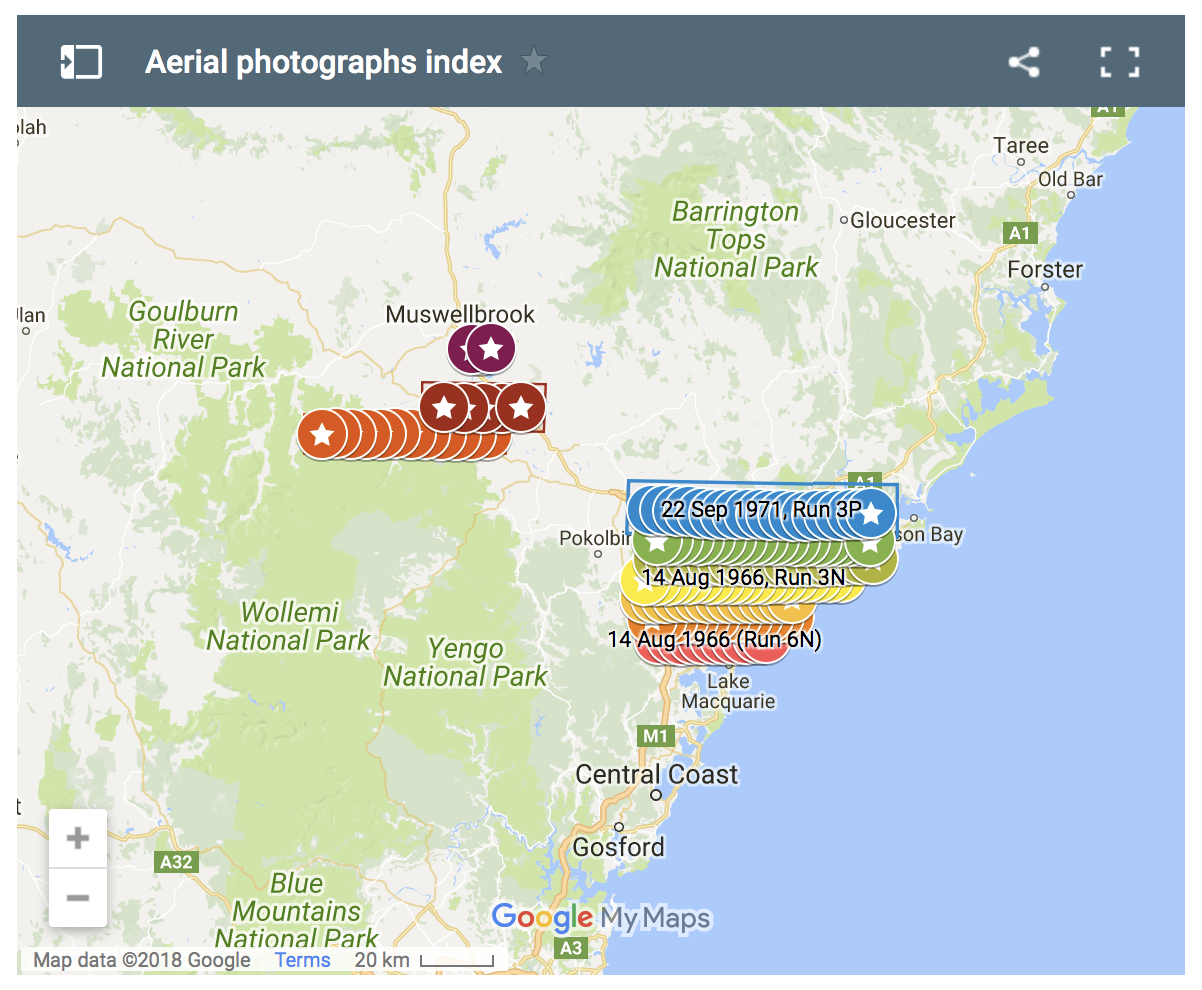 To date Lachlan has mapped the series of photos relating to the Newcastle area – and is still to add more in coming days and weeks from the upper Hunter.

An issue has arisen with the photographs where ”North” is not at the top of the photo. Typically the flight lines are alternate East to West, and then West to East, for the most efficient flying pattern. Our Hunter Living Histories member, Russell Rigby, will be assisting with rotating the inverted images so that north is to the top for all of the images within a project ( or at least consistently where the flight lines are oblique, for example, with the Wingen images).  This makes the set of photos easier to read and relate to each other, and is the way that the photos would be used to make mosaic images anyway.

If we wish to echo our classical heritage, we can call this pattern of reversing flight directions  “boustrophedon”:

Boustrophedon /ˌbuːstrəˈfiːdən/ (Ancient Greek: βουστροφηδόν, boustrophēdón “ox-turning” from βοῦς, bous, “ox”, στροφή, strophē, “turn” and the adverbial suffix -δόν, “like, in the manner of”; that is, turning like oxen in ploughing)[1][2] is a kind of bi-directional text, mostly seen in ancient manuscripts and other inscriptions.[3]Every other line of writing is flipped or reversed, with reversed letters. Rather than going left-to-right as in modern European languages, or right-to-left as in Arabicand Hebrew, alternate lines in boustrophedon must be read in opposite directions. Also, the individual characters are reversed, or mirrored. It was a common way of writing in stone in Ancient Greece (Wikipedia)

As well as annotating some of the images Russell has started calculating approximate scale of  each image ( from image size, flight height and focal length) and position of centre of photo (as Lat/long). This information will also be recorded in the metadata – the scale can also be expressed as the ground distance shown on one edge of the image, or the diagonal. The scale actually changes across the image depending on the flight height above terrain, and the radial distortion inherent in the optical system, so it will be only indicative, and may not be quite the same as the scale quoted on the photo margin.

We greatly appreciate the work of Lachlan Wetherall, Jessica Waugh, Robert Watson and Russell Rigby, and our colleagues, who are enabling this important archival information to be brought to the wider community through digital platforms in exciting and creative new ways.