Cook sights the “small round rock or island”

According to the 1790 published account of Captain Cook’s Voyages Round the World, around noon on the 10th May 1770, Cook sights the “small round rock or island” later to be known to Europeans as “Nobbys” and to the Aboriginal people of Newcastle Mulubinba as “Whibayganba”. At 4pm he passed a “low rocky point” that he named “Point Stephens”, and the inlet, he named “Port Stephens”.

Cook’s Journal also appears to state that he sighted the “small round rock or island” on Thursday the 10th May 1770.  He then sighted and named Point Stephens and Port Stephens on the following day; 11th May 1770.

There is probably an explanation to this, relating to how naval officers reckoned time.

Thanks to Mark Metrikas, who has directed us to an explanation posted on the Captain Cook Society site:

“When Joseph Banks recorded events in his journal, he used civil time, meaning that each day begins at midnight. So 10 am comes before 2 pm on the same day. However, in the eighteenth century, naval officers used nautical or ship’s time rather than civil time. Ship’s time means that each day begins at noon. So 2 pm comes before 10 am. Hence, Cook’s journal entries begin with the events of the afternoon, followed by midnight, followed by those of the morning, and end with noon.” – Civil Time, Ship’s Time and the Date Line by Ian Boreham (Editor)

Cook’s Endeavour Journal at the National Library of Australia

Did Cook draw the position on the “small round rock or island”?

Captain Cook’s original charts were published between 1988-1997 by the Hakluyt Society in association with the Australian Academy of the Humanities, in The charts & coastal views of Captain Cook’s voyages / chief editor, Andrew David ; assistant editors for the views Rüdiger Joppien and Bernard Smith.

The chart of most interest to us, is 1.273 as it appears to record the position of Nobbys in close proximity to Port Stephens. The “finished” version, Chart 1.272, appears to omit Nobbys at that location.

And for comparison, Chart 1.272 (Finished Version)

You can never have too many maps and charts. This “unfinished version” provides us with an early European representation of Nobbys Whibayganba, a feature, that the “finished” version appears to have omitted. 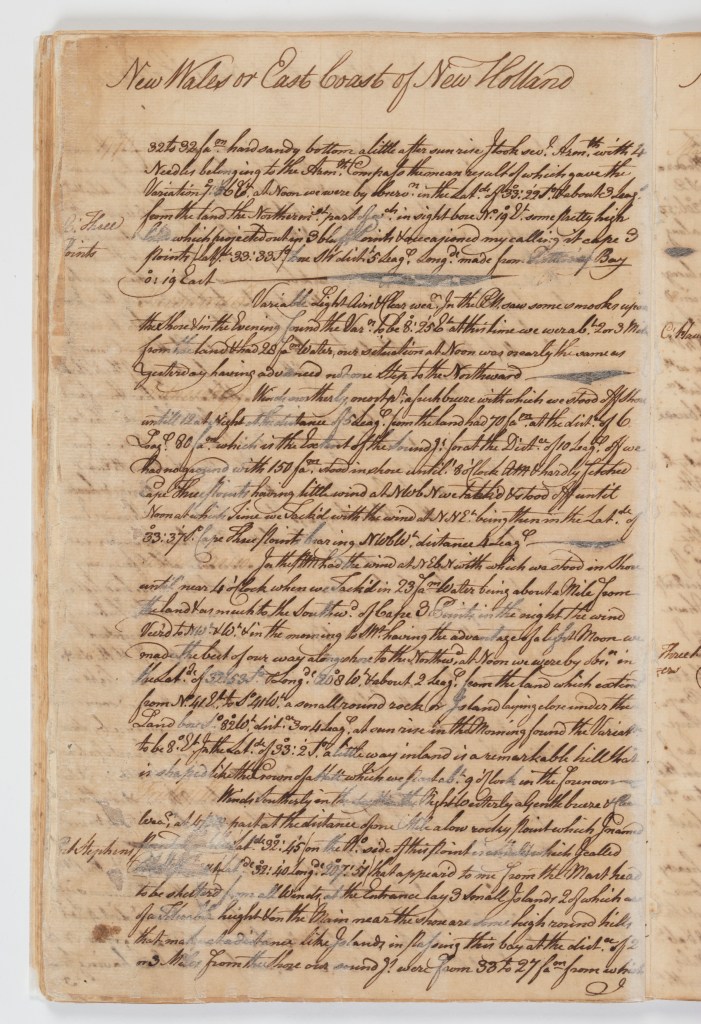 James Cook – A Journal of the proceedings of His Majesty’s Bark Endeavour on a voyage round the world, by Lieutenant James Cook, Commander, commencing the 25th of May 1768 – 23 Oct. 1770 (State Library of NSW)

The James Cook Heritage Trail site provides identifications of the geographical features along the East Coast that Cook identified in his journal and logs.

Consult the following with regards to the Central Coast and Hunter Region coastlines:

Mr Mark Metrikas has directed us to these additional entries.

Mark Metrikas notes on the above logs:

2 thoughts on “Did Captain Cook Sight and Draw the “Small Round Rock or Island” now known as Nobbys Whibayganba on 10th May 1770?”

Did you know…Special collections has a Reading R