You are invited to the launch of the Dr Bob James Fraternal Societies Exhibition at Special Collections (Auchmuty Library) Callaghan Campus on Wednesday 23 March, 2-3 pm.

Dr Bob James has prepared the following blog post associated with the upcoming exhibition and we sincerely thank him for his contribution.

A selection of items from the Fraternal Society collection will be on display, narrating fraternal societies in Newcastle, Hunter region and beyond from the late 19th and early 20th centuries.  These items are now digitally available for students, academics, teachers, and community, the collection includes photographs, honour boards, certificates, regalia, medallions, and oral history recordings. The fraternal societies collection is available online.  Please join us at the physical launch of this exquisite collection. RSVP essential 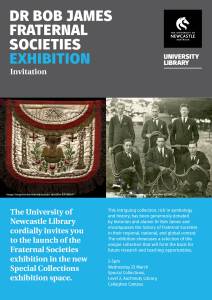 By Fraternal societies I mean societies which use, or have used, coded regalia, secret passwords, ritual and signs, which have practised direct democracy, and which have expressed, and celebrated, a philosophy of brotherhood through the mechanism of mutual aid. Fraternalism is the practise of such societies. Among modern fraternals there have been four categories, or sub-groups. The first three are:

The fourth sub-group encompasses societies which are clearly fraternal but do not belong in the first three groups. Examples of these in Australia are the Orange Orders, Catholic Fraternities, the Methodist Order of Knights and the Scouts and Guides. Globally, this sub-group also includes the Ku Klux Klan, triad gangs, the Sons and Daughters of Temperance and the British Order of Free Gardeners. There have been many others.

The Collection of fraternal artefacts here at U o N is largely Australian and within that the Hunter River District. But just as ‘fraternal societies’ spread all over this continent, they also spread across the world. Their origins go back at least to the mediaeval guilds and fraternities which existed throughout Europe and there have been comparable societies in many other parts of the world. The Australian societies are not exactly the same as those in England, or Scandinavia, China or New Zealand and this must be kept in mind when you read an account which claims to represent all ‘fraternal societies’.

The contribution made by the Hunter’s fraternal societies has had little research attention, and there are many secrets to be uncovered and many myths dismantled.

The value of fraternal societies in the HRD and around the world goes well beyond mutual aid and working class insurance schemes against poverty.

The fraternal societies were so numerous and so popular that they had an army of members – ‘bretherin and sisteren’ – and supporters preparing and painting banners, building floats and wearing costumes in Eight Hour Day, Sports Days and many other community celebrations. They ran newspapers, went into parliament, fielded sporting teams, built hospitals and opened bridges. And they fought one another for religious and political dominance, physically and through their organisations.

My definition of’ ‘fraternalism’ reflects the failure of ‘modern’ fraternals to achieve their essential ends because since 1789 or so they disregarded the secret and ceremonial elements which had been the key to guild and fraternity success. Caring for one another and joining together in groups to achieve a common goal – ‘mateship’ and ‘community spirit’ – are fine ideas and need to be encouraged but they are mere shadows of the original fraternalism.

Many fraternal societies begin their histories with creation myths based on the Bible and claim existence since the beginning of time. Their stories of how and why they came about have become mixed up with ‘real-time’ history and resulted in a lot of misunderstanding. The mythology that has been created – ‘the New World Order’ for example – has been used to start wars, to suppress populations and to advance political causes. The myths have also resulted in scholars having different opinions of what has been a very diverse range of combinations – ‘secret societies’, ‘benefit societies’, ‘voluntary associations’ and the like.

Many people assume that anything to do with secret oaths and unusual ceremony must be ‘Masonic’ and if it isn’t ‘Masonic’ it must be up to no good. My introduction to Australia’s lost, secret history was a very focused but wrong-headed curiosity – why did late 19th century marching banners carried in Eight Hour Day parades hold what I then assumed were ‘Masonic’ symbols – that handshake, beehives, Noah’s Ark, angels, among others?

The important, complete story is becoming clearer. It is my sincere hope that you will join the study programs designed to continue that work. There are many ways that the Fraternal Societies Collection can help your research, whether your field is Politics, History, Social Welfare, Comparative Religions, Mathematics, Gender Equity, Anthropology or Economics.

Harland-Jacobs, J, Builders of Empire, U of North Carolina, 2006.

James, B, They Call Each Other Brother – Secret Societies and the Strange, Slow Death of Mateship in Australia, 1788-2010. Self-published, 2010.

Laffan, T, How Orange Was My Valley – Protestant Sectarianism and the Loyal Orange Lodges of Australia’s Hunter Valley, 1869-1959. Toiler Press, 2009