“Rock Art as a Contextual Archive: Respecting Cultural and Spiritual Dimensions within a Comprehensive Scientific Approach”

This paper approaches Rock Art as a human archive; applying archival theory to archaeological practice in Aboriginal cultural sites to build knowledge about their context, cultural landscape and wider relationships for future preservation and care. Aboriginal site recording to date has been largely limited within the purview of archaeologists and anthropologists working in conjunction with Aboriginal people. This paper proposes that the GLAM sector (i.e., Galleries, Libraries, Archives and Museums) can play a new role in comprehensively broadening the recording of Rock Art sites as “archives in the field” safeguarding their evidential nature in a scientific framework. The GLAM sector offers multidisciplinary perspectives that are underutilised in terms of projects and engagement with Aboriginal communities and culture. This wide discipline approach encourages other knowledges to also be applied to the study of Rock Art, such as those that enhance social and emotional well-being. This paper examines what can be done in practical terms of learning, advocating and sharing knowledge that respectfully honours the First Peoples of Australia, the Aboriginal People, through professionalism and respect. The University of Newcastle’s GLAMx Living Histories Digitisation Lab has been involved in several projects associated with Rock Art of Wollombi in the Hunter Region of NSW. Case studies including historical research and survey documentation, illustration, community education and advocacy are also discussed.

This work is conducted in memory and respectfully honours the First Australian People, the Aboriginal People of this Land.

The second part of the paper discusses work undertaken at the University of Newcastle‘s GLAMx Living Histories Digitisation Lab by students and professionals who bring diverse knowledge and skill sets to examine the rock art at the Wollombi area in the Hunter Region, NSW. (Note:- GLAM denotes galleries, libraries, archives and museums). 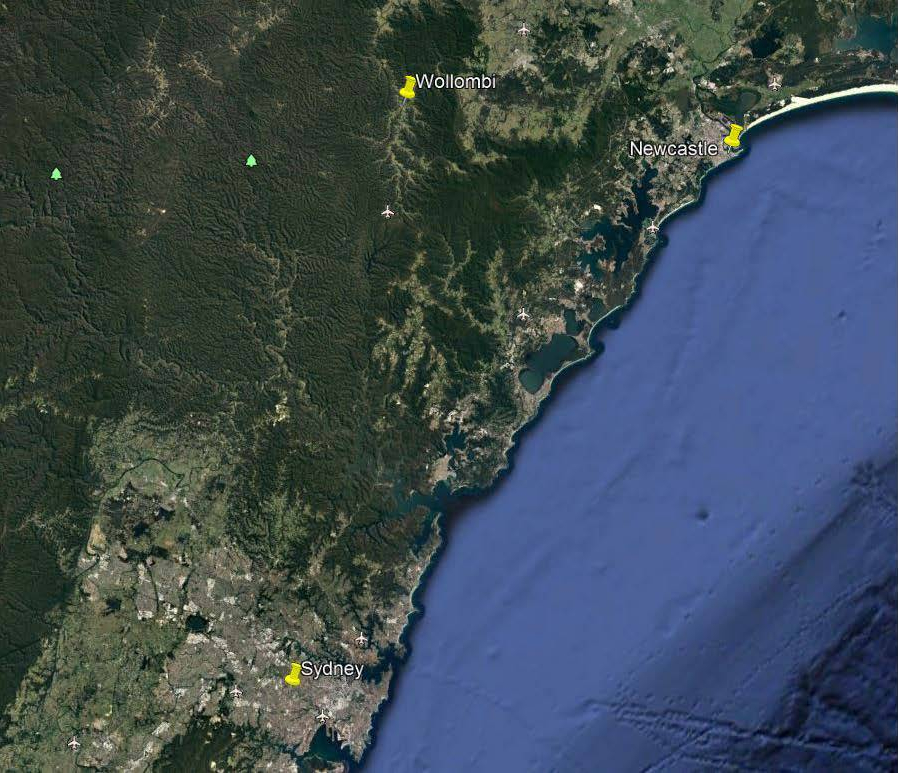 One of the rock art sites is at Finchley reserve also known as the Northern Map site in the Mt Yengo national park, the park has world heritage listing, however the is for natural heritage, there is no formal ‘world’ recognition of Aboriginal cultural heritage located in the national park.

The following is a brief review of the ‘archives’ and ‘records’ acts in Australia- and their definitions.
Archives are defined both as ‘evidential records of enduring value’ and the buildings that house them. This definition implies Western European forms of human expression upon which a language has been recorded in writing on inscribed stone, clay, paper, or recorded aurally or digitally through audio-visual optical disks, databases and emergent social media platforms. 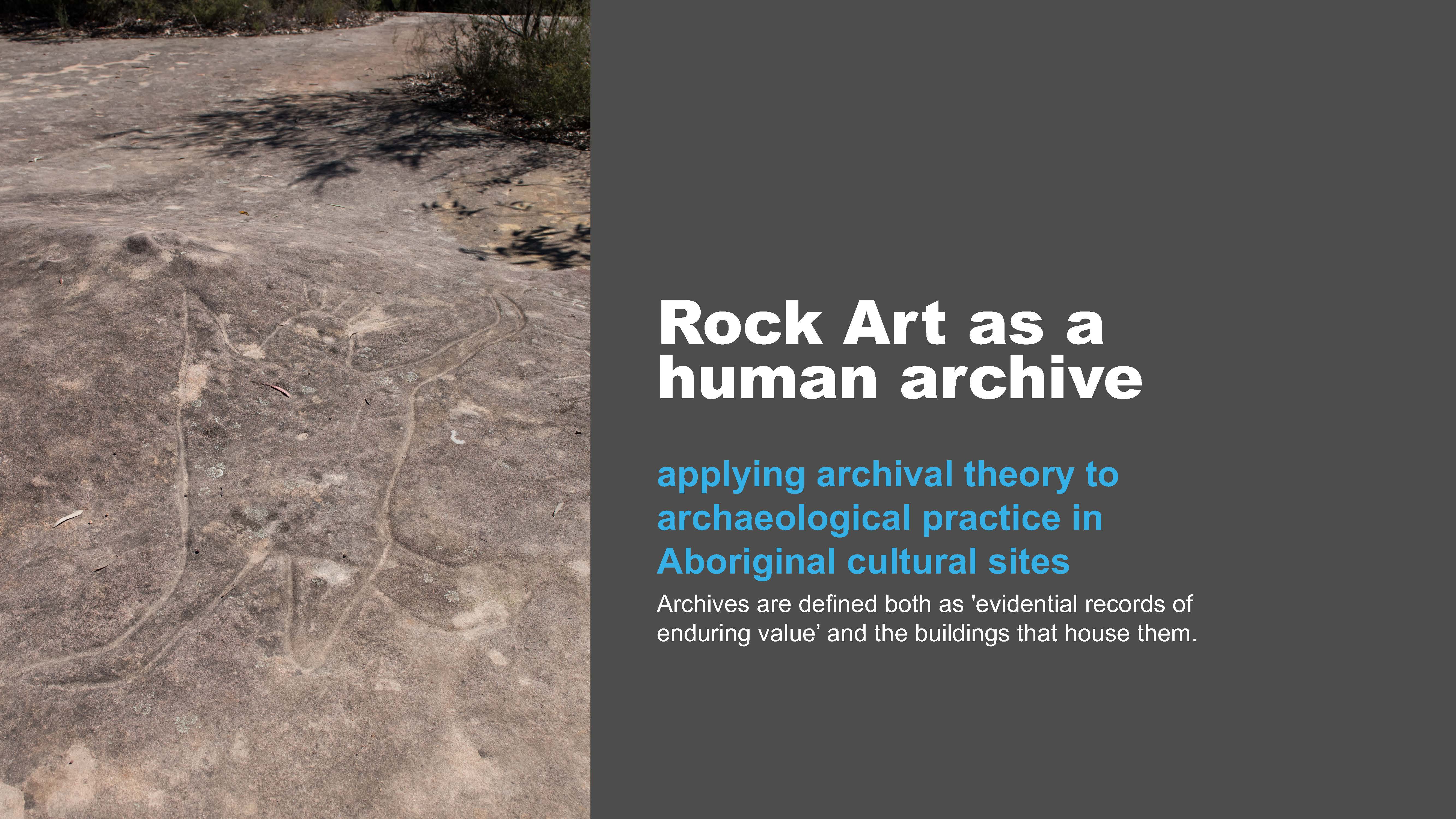 The question we are asking is:-

How can this be achieved? How can we “prove” that such exist?

In Australia, both at State and Federal levels, records are mainly defined within a European paradigm. There is no formal recognition of Aboriginal knowledge or language as an oral tradition, or as its various modes of expression exist in the landscape, representing the cultural memory, tradition and rituals of the people. Such modes of recording, do not fit the description as defined by our archives and record keeping institutions. Even though, physical evidence gathered at a crime scene for instance does constitute formal recognition as acceptable evidence.

For example, The National Archives of Australia defines a “record” as:-

“Any information created, sent and received in the course of carrying out the business of an agency. Records have many formats, including paper and electronic. They provide proof of what happened, when it happened and who made decisions.”

As you can see there is an emphasis on the paper and electronic (born digital records/archives). Another example, the New South Wales State Government states that a

“record means any document or other source of information compiled, recorded or stored in written form or on film, or by electronic process, or in any other manner or by any other means.”

With particular regards to records protected by the State Records Act 1998 (2005): 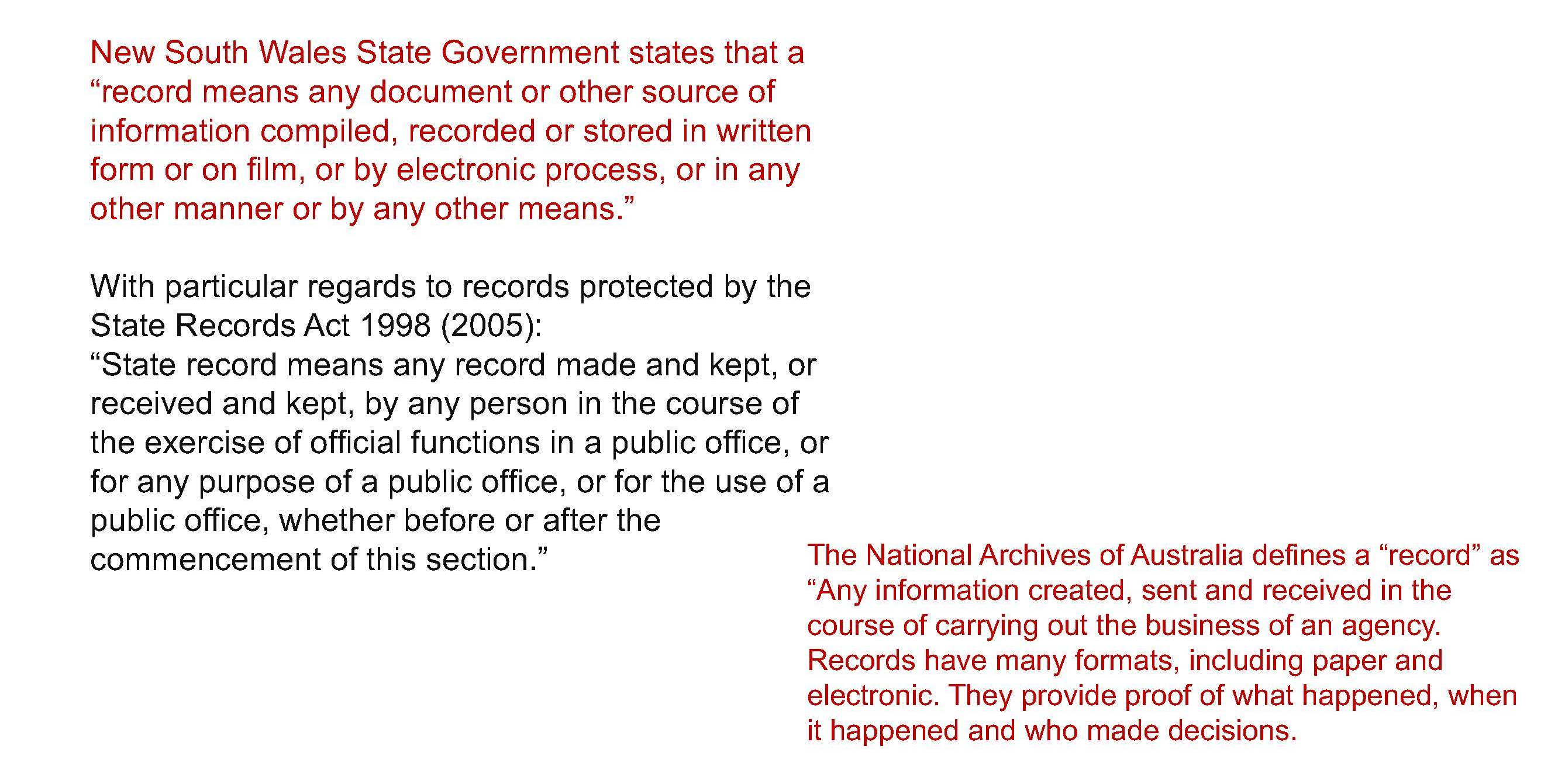 According to the State Records ‘Standard on Full and Accurate Records’

This is a summary of the 7.2 “Characteristics of a record”, from the International Standard on Records Management ISO15489 (which was the original Australian standard, which later became the international standard).

These are the prerequisites that Aboriginal records will need to demonstrate in order to be “acceptable” evidence. This is why archaeological digs are so important, as, they can demonstrate an authenticity that is backed up by a scientific methodology. Anything on the surface is vulnerable to tampering, and so cannot be verified, unless there is some scientific “test” that can be applied to a pigment on the wall, or a specific context, such as inaccessibility, or location, that may warrant an acceptance that the rock art or engraving site was there from time immemorial. Same for oral, and ritualistic cultural traditions.

So, in terms of Australian Aboriginal culture, which is estimated as being at least 50,000 years old, apparently none of it is officially considered as a record/archive.
One archaeological dig that may demonstrate ‘acceptable’ evidence are the artefacts from an 6,700 yr old Aboriginal factory site in Newcastle West, known as Newcastle’s Deep Time Project. 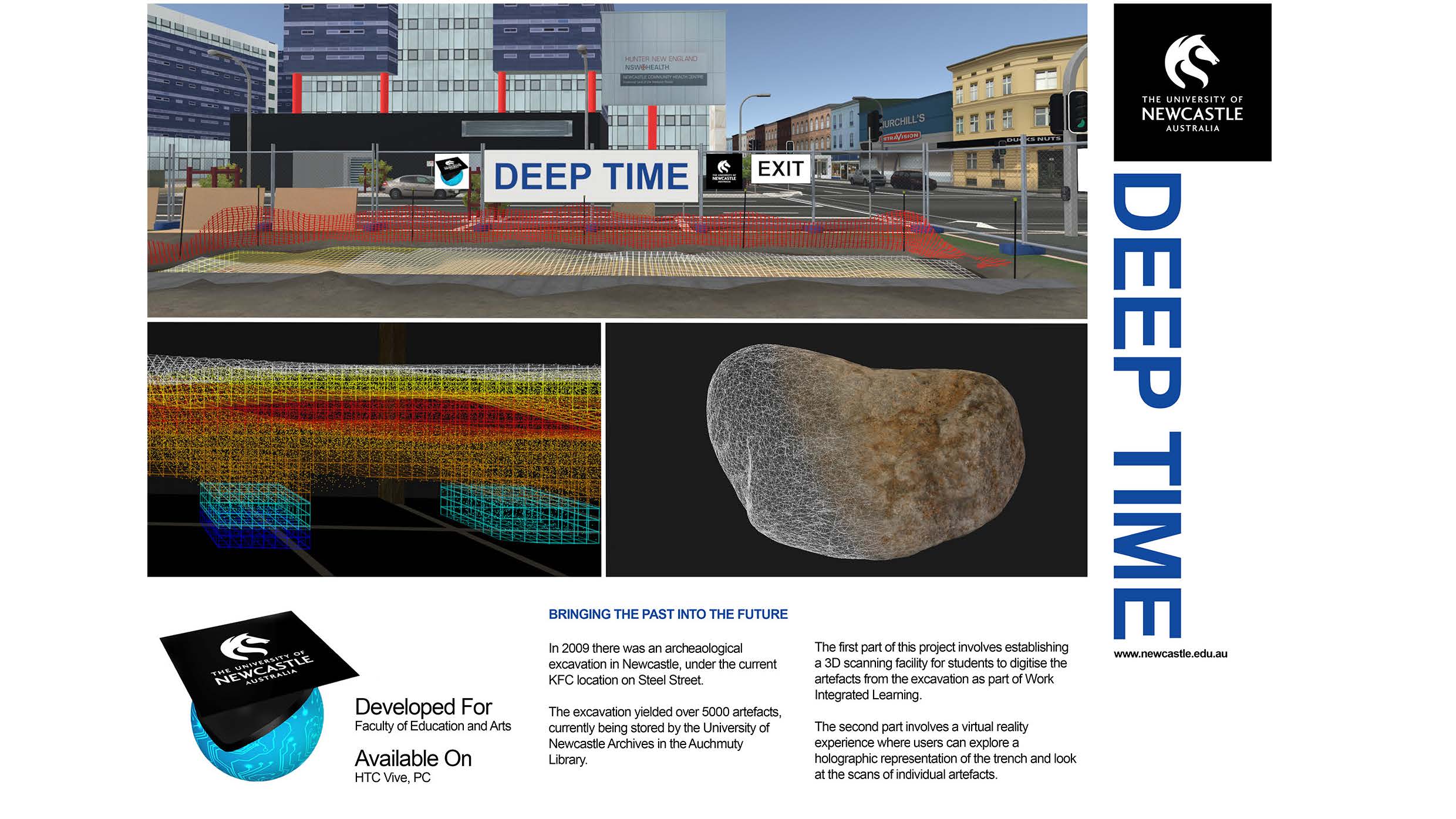 The University of Newcastle’s Cultural Collections created a 3D immersive archaeological dig where the artefacts can be displayed with their scientific and cultural context. Using the archival principles of original order, and preserving the context created a scientific data set that proves that humans existed and created tools in Newcastle across three waves of human habitation. This case study has implications dimensional within the Cultural Collections’ GLAMx Lab as an approach for encapsulating contextual archaeological and archival scientific data relating to Aboriginal artefacts. The decision not to re-bury artefacts meant an intact ‘archive’ exists to provide opportunities for students across many disciplines to build knowledge about Aboriginal culture– from natural history illustration, geology etc.

As already described archives and records legislation do not apply to ‘rock art’ in Australia, but let us explore what is being written in this space about ‘archives’ and rock art from international perspectives.

We find terms relating to Libraries and archives are increasingly being used in the literature about ancient tangible sites and provide a contemporary approach to understanding rock art sites in a new and very fresh way. 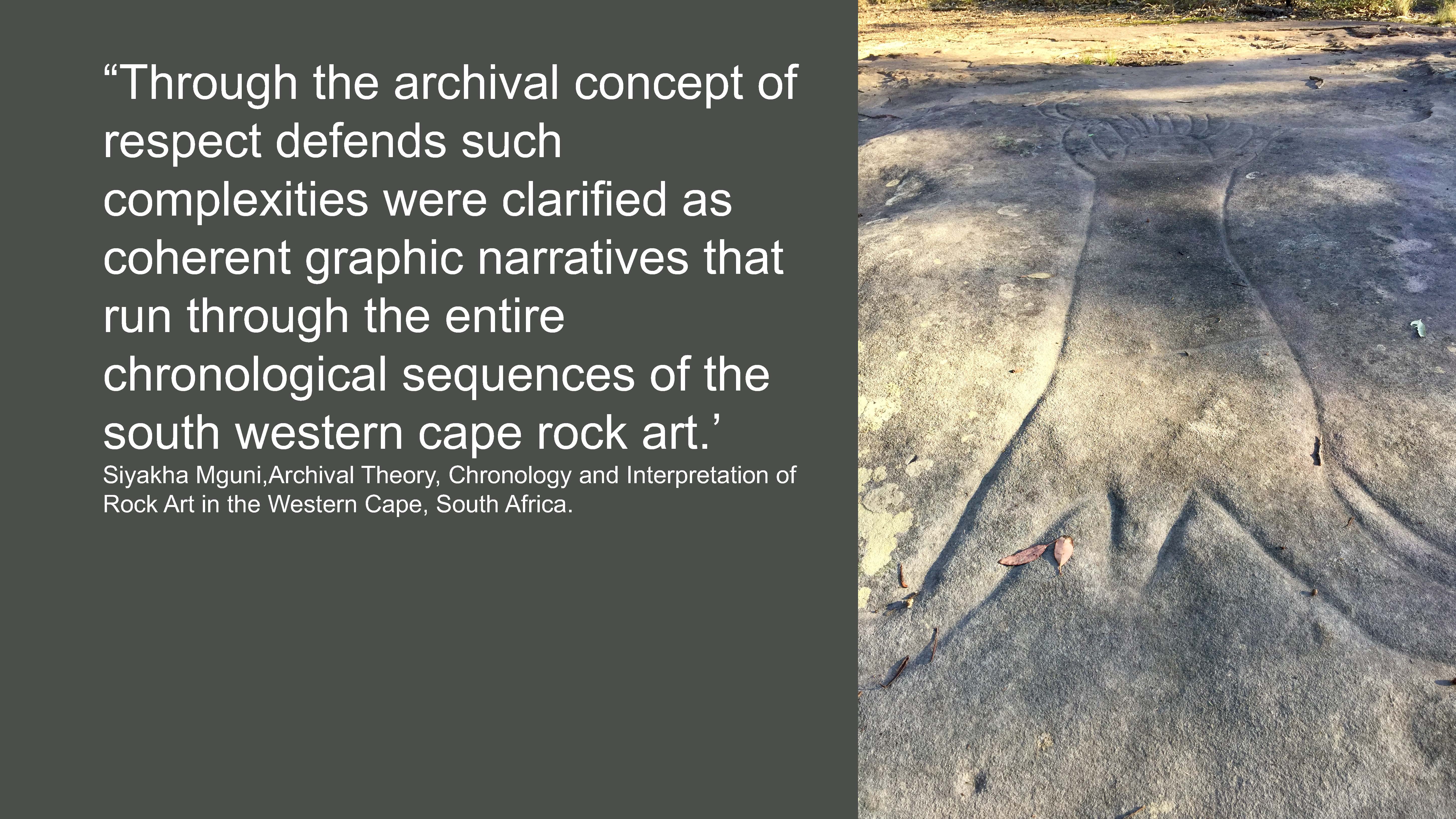 The term ‘archiviology’ applies to this broadening field of archives and the interdisciplinary science of the archive (Derrida & Prenowitz, 1995, 26). The archival approach enables chronology and context to be understood together especially across wide areas and environments.

Derrida describes what an archival approach may look like “informed by the expertise of historians, librarians, artists, literary scholars, cultural theorists, heritage advocates and computer programmers.” He also refers to ‘living’ agency – “that the archive itself actively shapes history, memory and the very nature of the archivable, describing the dynamic interplay between the archive and the archivable as a process of ‘archivization’.” 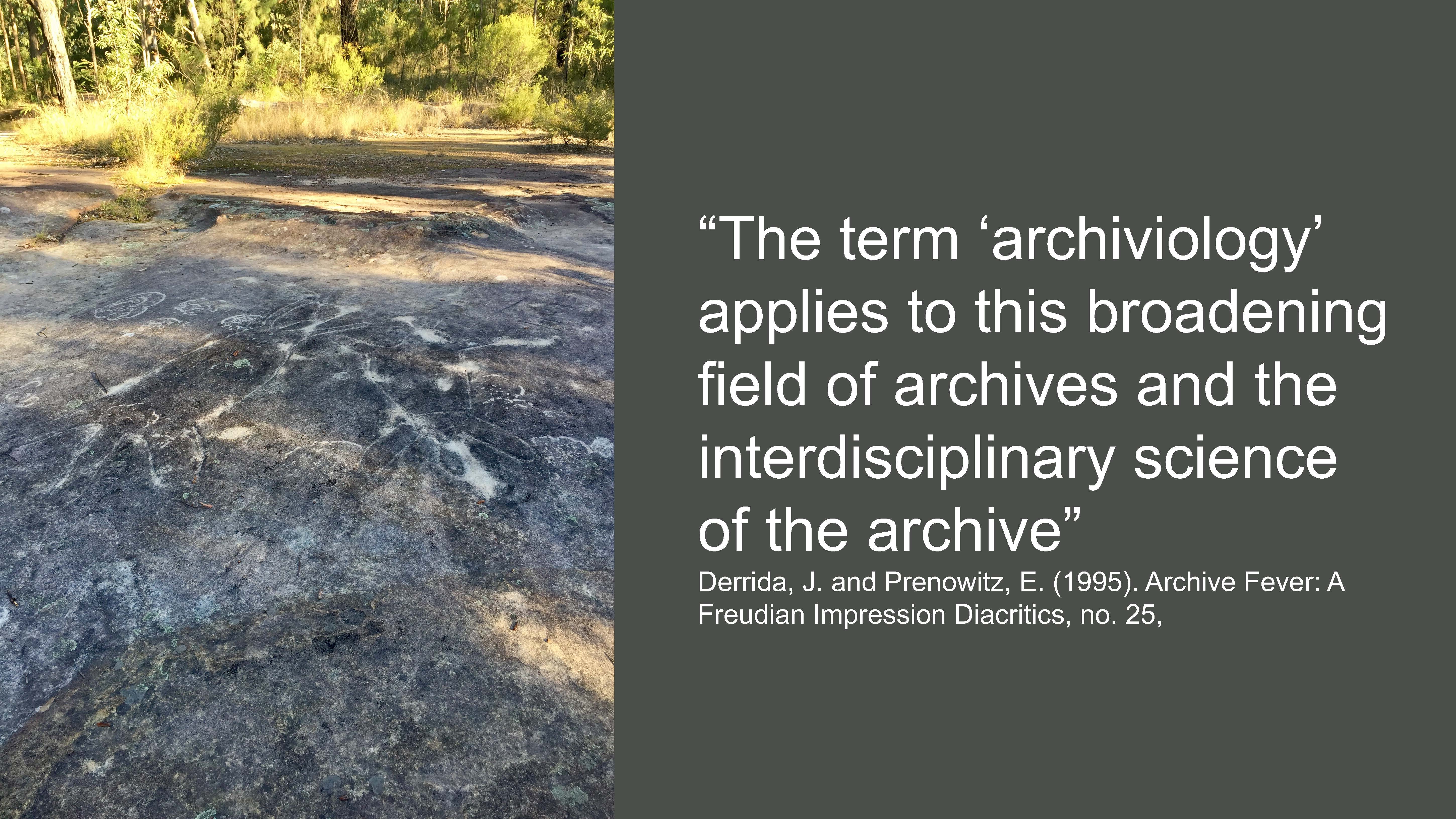 Ryan says the term ‘archiviology’ also applies to broader cultural contexts, and ‘living archives’ to natural settings containing cultural heritage. An approach that can be effectively applied to rock art and the environmental context.

The work of Wintjis in Icons and Archives describes archives as:- 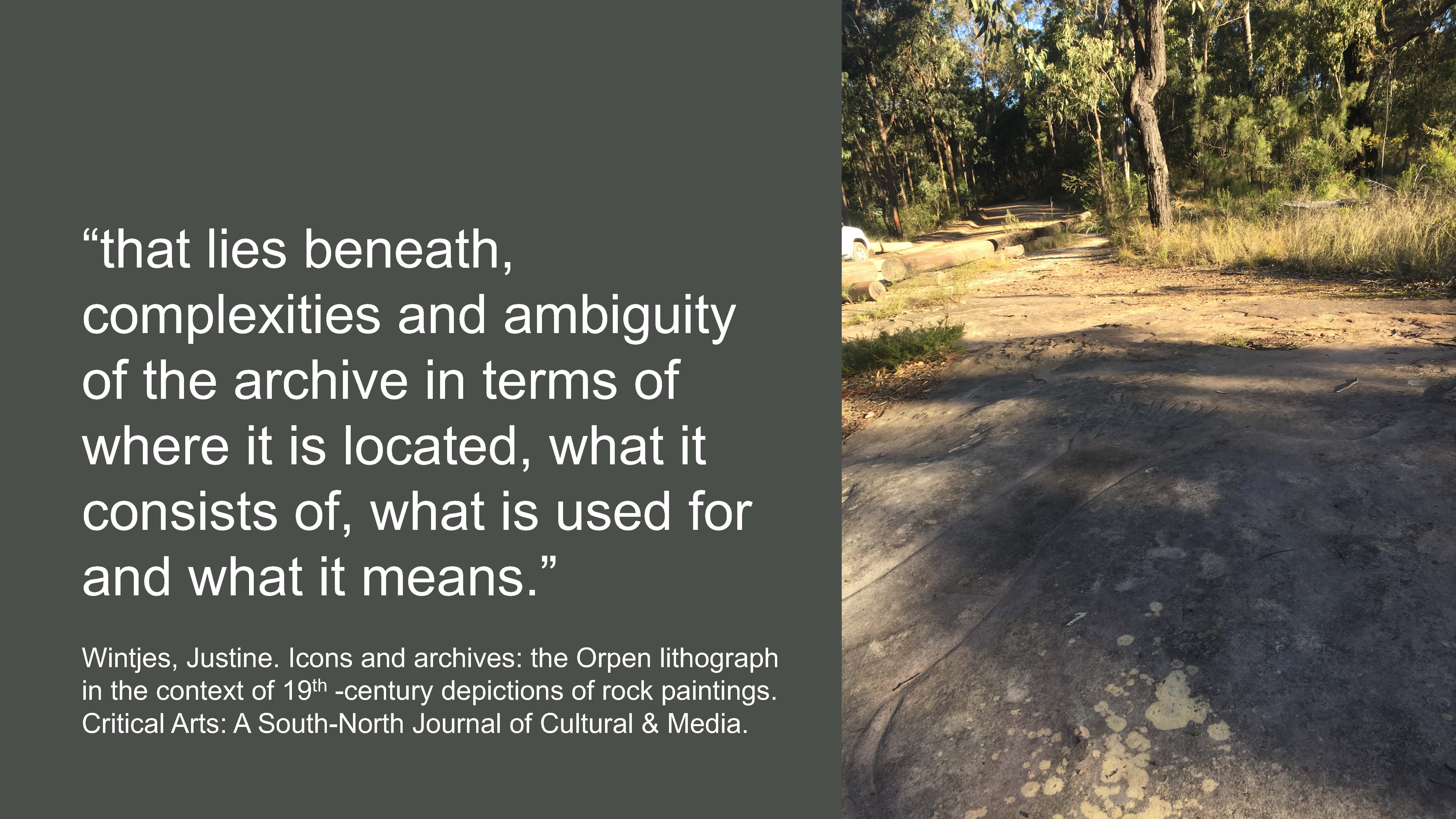 Use of ‘archive’ in an extended archaeological sense, where the site in the landscape is itself a kind of archive and the documentary record an extension of that archive. -similar to the Deep Time project previously described.

This is a very broad approach encompassing natural and cultural heritage in the field, including rock art sites and caves, and associated traditional archives such as original field notes, illustrations and sketches and other written sources.

Literature shows that discussions are very much broadening in terms of what is an ‘archive’ – to include ‘rock art’ and is a more holistic approach that looks at whole environments and any associated documentary records. 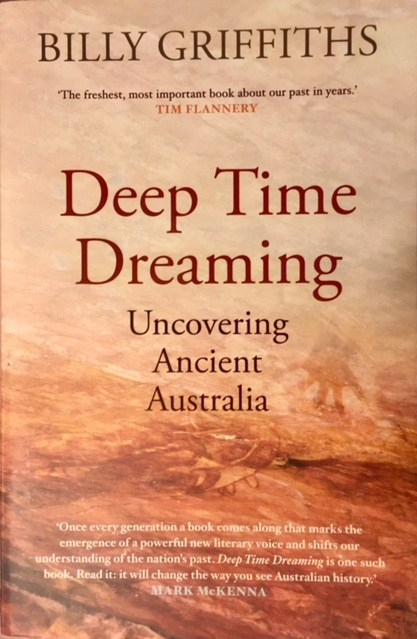 The Australian context has deep history – as Billy Griffith suggests in his book Deep Time Dreaming that Indigenous cultural significance ‘is about time itself’, not the archaeological finds cast in silver or gold – sites that have intactness and integrity are more likely to have verifiable ‘evidence’ as a human record. The complexity of this natural archive is about deep time, Aboriginal culture in Australia is the oldest continuous culture and rock art is the evidence of this. Aboriginal culture is deeply embedded in the land and many archaeologists working in Australia work with what Griffiths describes as a subtle material archive, “they read history in landscapes and vegetation, precision marks and plenty of residue, sediment and stone arrangements.”

Rhys Jones comments on the fragility of Australian archaeology, particularly where context is broken during excavation and cannot be reconstructed. He describes
“fine grained, tightly compacted archive of climatic and cultural changes, a historical document waiting to be read once and once only.” Fortunately, many rock art sites are more robust than archaeology involving excavation, ‘rock art’ can be ‘read’ many times, documented and extensive ‘archives’ do exist.

What is needed is a consistent and managed approach to bring scientific knowledge and Indigenous knowledge together to test whether some rock art sites are ‘archives’. And the GLAM sector can play a significant role in documenting, researching, interpreting and promoting public awareness of Aboriginal heritage as a living culture in Australia.

This is an approach taken at the GLAMx Living Histories Digitisation Lab. It is from the very broad definition of ‘archive’ – that students, staff and volunteers are researching and documenting rock art sites at Wollombi, and making publicly accessible.

The following are some examples of the work undertaken and made public under the auspices of Hunter Living Histories. Sources can be interpreted and shared and new research perspectives created.

1937 November 16 – LITERATURE IN STONE – stolen symbol is centuries old
The newspaper reference from 1937 provides an understanding of some of the perceptions, ideas, values people had about Aboriginal rock art of the day – levels of knowledge and respect- using library terms as an analogy to describe the meaning of inscriptions.

WHAT NEXT
Continue collaboration with Traditional owner groups, NPWS and OEH to bring knowledge of Aboriginal rock art to the University. Acknowledge that rock art exists in the region and support community engagement – particularly with young Aboriginal people. As well as,

In terms of applying archival theory to rock art sites we need to rebuild context. Both Western science and Indigenous knowledge are necessary- one supporting the other.
At present archival theory is ambiguous in terms of rock art, essentially compounded by the introduction of digital technologies and social media approaches to archival practices. A lot of the focus is on how to archive born digital content (we are living in such a fast pace society).

What we can do is focus on what is archivable, as described earlier, the prerequisites that Aboriginal records will need to demonstrate in order to be “acceptable” evidence – much of which requires scientific rigour. Perhaps use the Newcastle Deep Time project as a case study to test the current archives act in Australia to strengthen thinking around ‘rock art’ as a form of human expression.

What the GLAM sector can offer are practices/methodologies that re-examine rock art and Aboriginal culture as forms of human expression and challenge existing definitions that exclude the ancient records created by Aboriginal Australians. The work of students and the wider community is supplementary to any testing of evidence, and is about ensuring that Aboriginal history and cultures in Australia remain alive.

Neale, Margo. The Third Archive and Artist as Artist. In Indigenous Archives – The making and unmaking of Aboriginal art. Edited by Darren Jorgensen and Ian McLean.  University of Western Australia Publishing 2017.

Nevell, Michael and Norman Redhead (eds). Archaeology for All Community Archaeology in the Early 21st Century: Participation, Practice and Impact. Published by the Centre for Applied Archaeology, University of Salford 2015.

Wintjes, Justine. Icons and archives: the Orpen lithograph in the context of 19th -century depictions of rock paintings. Critical Arts: A South-North Journal of Cultural & Media.