Three reels of 16 mm film by the late James (Jim) Murphy have been digitised in the NBN Television Archive at the GLAMˣ Living Histories Digitisation Lab in the Auchmuty Library, University of Newcastle. The footage was donated several years ago and is now publicly accessible.  UON Work Integrated Learning student Brydie McEvoy is coordinating the research project for cultural collection, taking a sociological approach to research and identify content of the film.

Most of the locations relate to areas around Newcastle and the Hunter Region, as well vacation scenes in other parts of Australia, such as Surfers Paradise. Some are International destinations include Hong Kong, Japan, Papua New Guinea and the Philippines.

Many thanks to the Lost Newcastle Facebook group who helped identify many of the locations and people featured in the film reels.  We were contacted by Christine Stent (nee Murphy) on the 22 October 2018 informing that her late father James (Jim) Murphy was the creator of the films. James was an amateur camera and film enthusiast during the 1950s and 1960s, capturing many social events.

James was from an Irish family who owned and managed the Bellevue Hotel in Newcastle West. During the 1940s he worked in the furniture department at Marcus Clarks Department Store located on the corner of Hunter and National Park Streets. From there he and his family went on the open a store in Newcastle named “Churchills” selling furniture and homewares. This store continues to operate in 2018. The family were Catholic and many events associated with Catholic schools and churches in the region feature in the footage. James died at aged 58.

I hope to be sociologist/anthropologist and my placement in the GLAMˣ Lab provided the opportunity for me to explore society and culture in Newcastle during the 1950s and 1960s. I have also been able to analysis the recently identified film footage created by the late James Murphy.  I am interested in the way people in Australia participate and benefit from engaging in cultural and leisure activities. While becoming increasingly interested in Australian society, it has become apparent that cultural and leisure activities allow us to acknowledge aspects of the human character, such as identity, personal history, creativity and for play and enjoyment. Leisure brings us the freedom to express who we are that has helped develop a strong cultural identity. Cultural differences can also influence how and what we participate in terms of leisure time, with variants commonly depending on one’s social class.

Newcastle; a city blessed with some of the most beautiful beaches in Australia, as well as striking lakes and rivers, it is a city that has undergone dramatic changes over the years. In the late 19th and early to mid-20th centuries, Newcastle was considered the heart of Industrial NSW, it was a city reliant on its steel production, agriculture including fishing, and dairying. Over the decades, there were many changes to the region, for example during the 1950s a major boom in housing. Many referred to the changing city as the ‘New Newcastle’, due to the increase in population and expansion to the outer suburbs of Newcastle (Newcastle Chamber of Commerce 1950-1970). The growth of residential areas also meant establishment of shopping centres, such as ‘Garden City’ (Now referred to as Westfield Kotara). Some years later in the 1970s, the Hunter Regional Council was established to monitor social changes of the region, and to assist community development (Callaghan, p. 8). The Hunter Regional Council describes the advantages of living in Newcastle and the social advantages it brought by being a resident of Newcastle, with the main point being that even though it is a large city, it is considered free of most social problems that often accompanied urban growth (Callaghan p. 14). From a family life point of view, Newcastle brought the opportunity for good housing and access to educational faculties, both at secondary and tertiary levels. Newcastle’s identification with its beaches is particularly important to both old and young who frequented the beach. Many people lived in the inner city near the beaches, those in the outer suburbs still weren’t too far from the coast and lakes.

During the late 1960s, Newcastle had a population of 400,000 people, already owning the title of one of the busiest ports in the southern hemisphere (Farrelly 1968). From the 1950s Novocastrians had come to enjoy recreational activities such as eating out at clubs, and visiting various ethnic restaurants (Norris, p. 91). For recreational activities, Newcastle has almost every type of recreational outlet available with many residents opting to participate in leisure activities such as picnicking, sports at the various parks Newcastle offers, and even sailing at Lake Macquarie.

Australia in the 1950s was a time of great prosperity. The Australian dream was to own a home on a decent sized block in the suburbs. The 1950s was a decade of many employment opportunities, there was a rise in living conditions, but one of the greatest symbols of prosperity was is you owned a car. This prosperity of the 1950s and 1960s is evident in the film footage shot by the late James (Jim) Murphy as shown in this post. There are various moments in the footage of the family’s car, the happy smiling faces of family and friends. From examining the footage of the family participating in cultural leisure activities, such as holidaying, picnicking and water skiing, it is apparent that the Murphy family were of middle-class origins. Some sociologists investigating the meaning of leisure among working, and middle-class Australian families, such as Harrington on purposive family practices among working and middle- class families (2015). Through a qualitative data study, Harrington explores the relationship between purposive family leisure and social class in Australian families (Harrington 2015, p. 471). Within Harrington’s study, they interviewed 28 working, and middle-class families on what constitutes family leisure which through analysis, proved to vary according the values each family internalized as well as the social class in which they fell (Harrington 2015, p. 471). Even though both working, and middle-class families participated in some of the same leisure activities such as watching TV, one major difference of the leisure activities each family participated in was in relation to cost. Lower class families preferred to participate in leisure activities that were considered inexpensive and enjoyable for the whole family such as going out for drives, and participating in family game night, where family togetherness was a key factor (Harrington 2015, p. 471). In relation to middle class families, this was considerably different as middle-class families preferred to participate in leisure activities that involved the outdoors such as going to a basketball game, hiking, going on holidays, or going to a swimming carnival (Harrington 2015, p. 478).

Callaghan, B. A Good Place to Live, Hunter Regional Council for Social Development.

This footage is provided free of charge to the global community thanks to the generosity of the late James (Jim) Murphy’s Family and the Vera Deacon Regional History Fund. If you wish to donate to the Vera Deacon Fund please download a form here: dl.dropboxusercontent.com/u/21528529/veradeaconform.jpg

Please contact us if you are the subject of the footage, or know the subjects and locations or have any further information about these films, please let us know by leaving a comment on this post, or by emailing ann.hardy@newcastle.edu.au .

00:01- 06:17 Wedding- D Hawkins and A Crossey- 22nd of October 1955- on the 10th of October- film 1- an individual within the youtube comments suggested that the the wedding was between Dorothy Hawkins and Anthony Crossey in 1955, also mentioning that Dorothy is the Daughter of Harold Hawkins who was the member for Parliament for Newcastle in the state government at the time. The Wedding was held at the Catholic church at Merewether. The locations and names of the individuals present at the wedding were also stated by another individual who posted on the ‘Lost Newcastle’ Facebook Page, backing up this information, mentioning that Dorothy’s husband had ‘Bellevue Motors’ for many years, and another stating that the church the wedding was held is the Holy Family Catholic Church at Merewether Beach.

Within the post related to this footage on the Facebook page ‘Lost Newcastle’, a few people have suggested that the footage was filmed by the Murphy family as they have identified pictures and clips of family, friends, and themselves as children.

– ‘my uncle Jim Murphy would have shot these films. Fabulous memories’- I recognize a lot of these faces including mine as a child, my mum and dad, cousins, bother, sister, etc’

‘there are lots of photos of my husband’s family and friends. Mark thinks that the film was taken by Mark Murphy from Churchill Rayford’s business. He remembers film nights at home’ 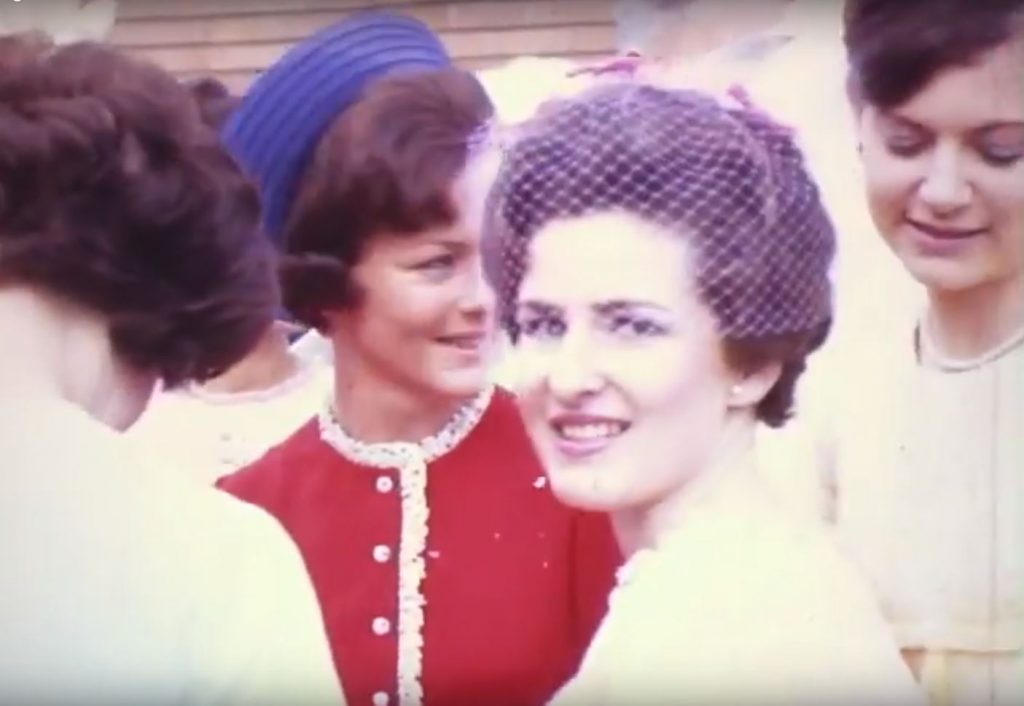 note: Cruises on film are P&O Sydney to Japan return 28 days in 1964 and Christmas Cruise on Himalaya P&O 1963.
00:13 Cruise- oriental cruise on ship called ‘Oriana’ – SS Oriana- now a tourist attraction in japan and china- Was the final great liner to be built for orient lines- travelled to Malaysia, japan, china, etc. Beginning of video- SS Oriana in Sydney harbour
02:24 STOP ONE – Rabaul, Papua New Guinea
04:03 – Rabaul War Cemetery (Bita Paka) Commonwealth war Cemetery- burials of the second world war- graves are from the casualties of the campaigns in New Britain and New Ireland, and Australians
Information on Bita Paka War Cemetery: was established by the army graves service in 1945- taken over by the commission in October 1947- Cemetery contains 1120 Commonwealth burials of the second world war in which 500 are unidentified as well as some WWI graves.
Link with Australia- commemorates more than 1,200 members of the Royal Australian Army (including personnel of the New Guinea and Papuan local forces and constabulary) and royal Australian Air force who lost their lives in the area in January 1942 and from November 1944 to August 1945, who have no known grave.
05:04 STOP TWO – Japan
06:25 – 06:38 Tokyo, Japan- 06:38– Sign showing year (in Japan) – 1964
06:58 – the great Buddha of Kamakuru- bronze statue of Amida Buddha- Kotokuin Temple- Second Tallest Buddha statue in Japan- cast in 1252 but standing in mid-air since 1945
08:08- Hakone- evident with name on ferry and google images
Third Stop- 10:32 Hong Kong, China
12:14 – now known as ‘jumbo Kingdom’ – seafood restaurant in Aberdeen, Hong Kong, China
13:59 – Hong Kong Hilton
14:12 STOP FOUR – Manilla- Philippines
00:14 – Oriental Cruise- Himalaya Cruise Ship- different Cruise? 01:35 – different cruise ship?
15:30 – Fort Santiago Rizal Shrine- Manilla, Philippines
16:02– Oriana- 1964 footage

We sincerely thank the family of the late James (Jim) Murphy for sharing their family archive.

Many thanks to Brydie McEvoy (WIL- Work Integrated Learning student) for her work on this project in the GLAMx Living Histories Digitisation Lab.