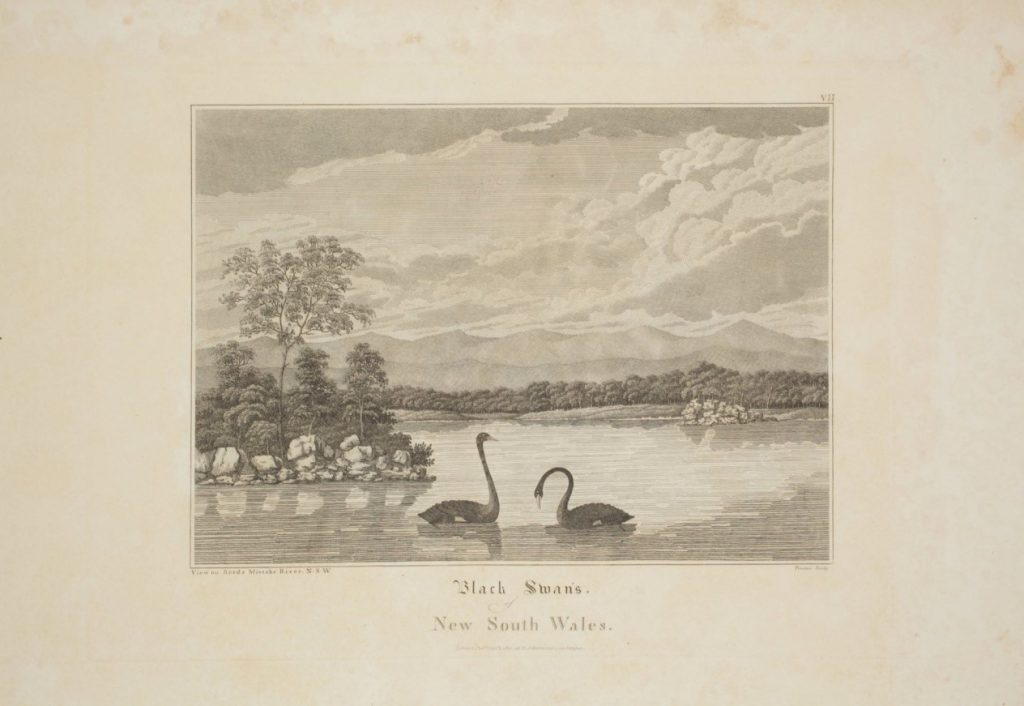 As part of the COVID19 lock down during April 2020, a challenge was published through the Hunter Living Histories Twitter feed to identify the possible location of an engraving of two black swans at Reed’s Mistake, (now Swansea) that were published two hundred years ago 1820, but captured sometime around 1818 as part of the illustrations for Captain James Wallis’ An historical account of the colony of New South Wales and its dependent settlements : in illustration of twelve views / engraved by W. Preston from drawings taken on the spot by Captain Wallis. To which is subjoined An accurate map of Port Macquarie and the newly discovered River Hastings / by J. Oxley
London : Printed for R. Ackermann by J. Moyes, 1821.

The challenge was taken up by Hunter Living Histories community historian Robert Watson, who prepared the following information for us.

An investigation was undertaken to determine the location from which Captain James Wallis Wallis sketched two black swans. Wallis had labelled the engraving as Reed’s (sic) Mistake River, which suggests the location we know as Swansea Channel. Black swans feed and nest in that area today, as well as in the quiet bays around Marks Point. A person sketching wildlife would normally record the creatures as accurately as possible, and perhaps not worry too closely about the distant landscape. In this case, the background is not immediately familiar to us. 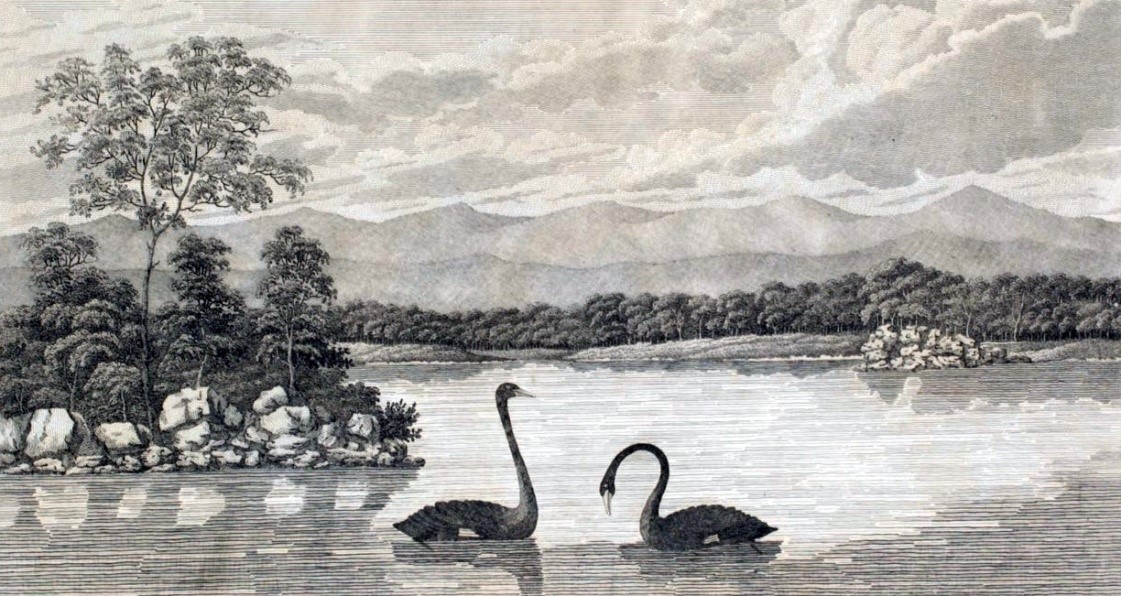 As a first comment, the prominent tree doesn’t look like an Australian native of this area. If anything, it looks like an immature [South American] jacaranda and is similar to trees drawn by Joseph Lycett.

The rocks on the left of the engraving could provide a clue to the location. On Swansea Channel, at the headland, there is a rocky outcrop from where Mt Sugarloaf is visible:

This particular area is not sheltered enough for swans, however further up Swansea Channel at Coon Island there may have been some rocky outcrops. It is difficult to tell because these days the channel shoreline has been protected using other rocks (not an outcrop).

In Wallis’ engraving, the perspective of mountains is highly compressed, much like we get with modern telephoto lenses. From Swansea Channel or Coon Island looking west, it is reasonable to accept that the treed ridge is Wangi Wangi peninsula, the middle ridge is Awaba and the horizon is the Watagans-MtSugarloaf range. 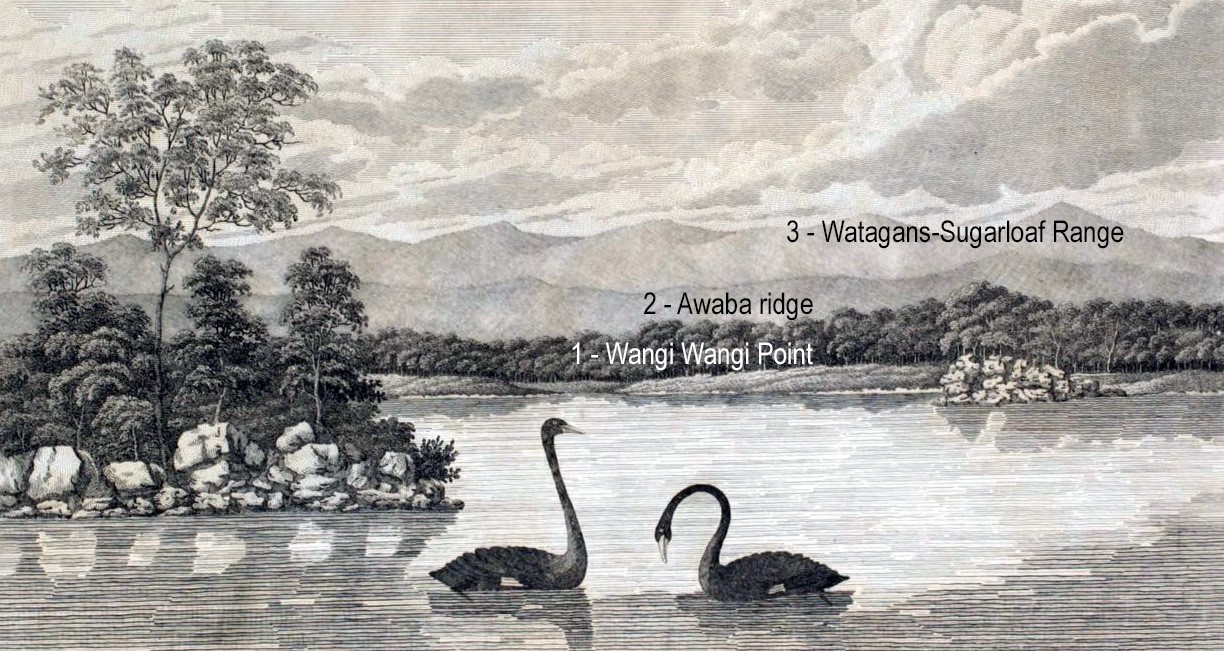 However, this is not the view seen to the naked eye, so Wallis – being a military man – undoubtedly must have used a telescope to get that detail.
This is the view from Swansea Channel:

And even zooming in, it is still difficult to make out three ridge lines:

There is another feature worth commenting about. In Wallis’ engraving the furthest ridge is distinctly sawtoothed, and there is no topography like that in the Lake Macquarie area.

Perhaps the background is entirely fictitious, or of a different area?

Have other artists used false backdrops? Yes! In the following comparison you can see that Lycett’s painting of ‘Sugar Loaf, Near New Castle (sic)’ most closely resembles his painting of Mt Wellington near Hobart! Anyone sketching around Lake Macquarie would draw Mt Sugarloaf in its characteristic and very familiar profile – a bump in the northern end of a long ridge.

If Lycett painted with inaccurate backgrounds then there is at least some possibility that Wallis and other artists did likewise.

Returning to the Sawtooth ridge line, if that ridge is erased from the engraving, the horizon suddenly becomes familiar:

Look at this remarkable comparison of minor peaks: 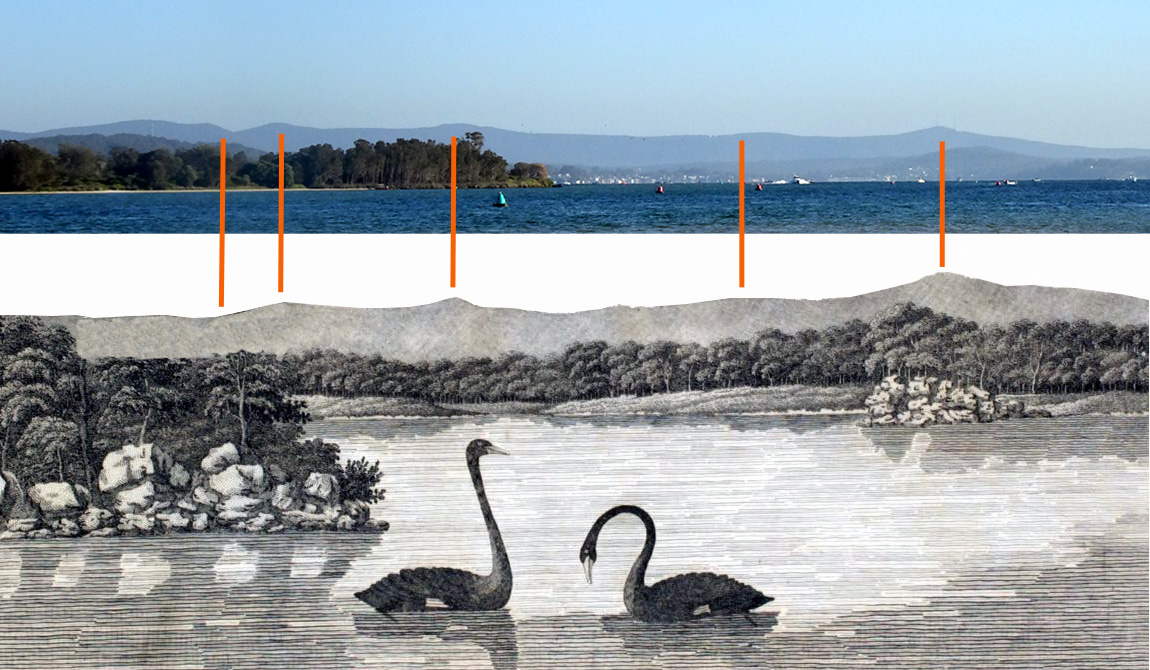 It is not difficult see the similarities. 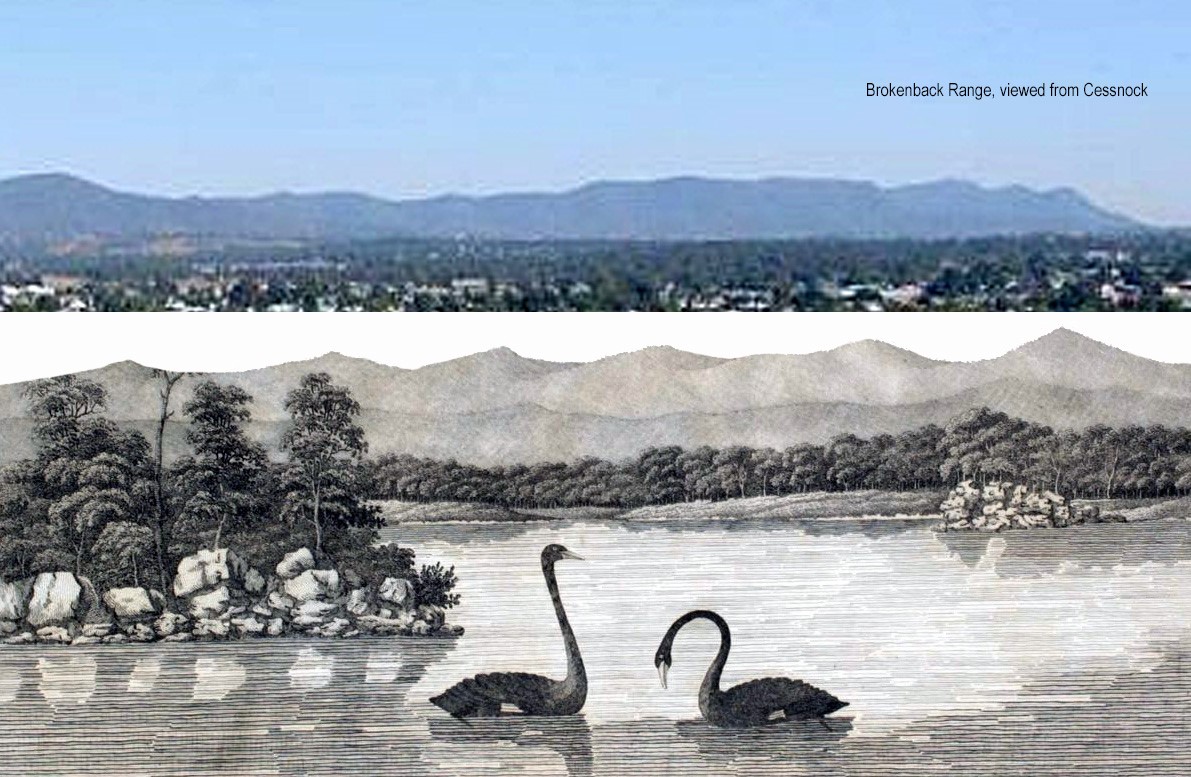 Those trees don’t help us, but with swans and some rocks, the artist could have been sitting somewhere along Swansea Channel, looking northwest. The only problem is that from the channel – at say Coon Island – the artist’s viewpoint [shown in red lines on the map] would be directly toward Coal Point. So the centre of the engraving would show land. But the engraving shows water with land on both sides.

A viewpoint just 1km north, at Marks Point, does provide a view [shown in green lines] which is very close to what is depicted on the engraving. These days, the bays to the south and north of Marks Point are well sheltered and are home to many black swans.

Conclusion
Capt. James Wallis’ engraving of Black Swans and the location being Reid’s Mistake Creek [Swansea Channel] are probably correct, for the swans.

However, the landscape backdrop appears to have been sketched from a different spot, a few kilometres to the north – around Marks Point.

The middle ridge line – Watagans-MtSugarloaf – is true to what would be seen from the eastern side of Lake Macquarie.

Wallis’ furthest ridge however is fictitious, since there are no further ridges visible to a person standing on ground level.

Speculation
There does remain one intriguing possibility. Being based in Newcastle, it is quite probable that at some time Capt. Wallis explored to the top of Mt Sugarloaf, and looked westward over the area named for him – Wallis Creek flowing across Wallis Plains. The backdrop for Wallis Plains is the rugged Brokenback Range.

If Wallis wanted to present a ‘bigger’ picture to impress his superiors or influential people back in the UK, then adding an over-the-horizon mountain range beyond Mt Sugarloaf would be a perfect example of ‘artistic licence’.

The alignment of minor peaks would require further research.

Researcher
If you have extra information about Wallis’ engraving or if you spot any errors or omissions, please contact us.