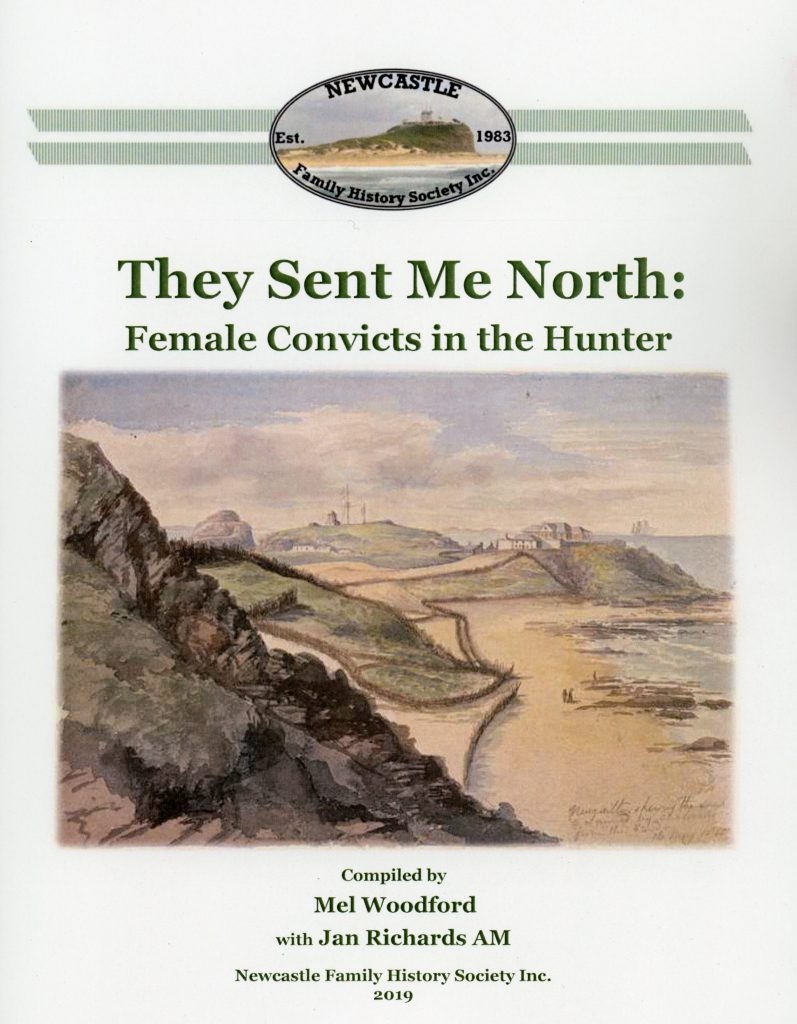 On Tuesday 31 July 2019, the publication “They sent me north: Female Convicts in the Hunter” compiled by Mel Woodford with Jan Richards, edited by Elizabeth James from the Newcastle Family History Society (NFHS) was launched at the Lovett Gallery, Newcastle Library.

The book has many contributions by the descendants of female convicts and members of the NFHS – there are over 80 contributions – and a database with over 3 thousand names– is significant and very exciting. we launch of this book, and its just the beginning of us hearing about these amazing women, the lives they led and the legacy they’ve left us.- particularly exciting because about women.

Overview and Launch of Publication They Sent Me North: Female Convicts in the Hunter by Mel Woodford (President NFHS).
Introduction of Dr Ann Hardy UON to launch the publication

Maitland & Beyond Family History’s Vicki Osborn to give an overview of publication The Female Convicts Who Were Connected to Maitland launch of publication by Cr Loretta Baker, Mayor of Maitland.

Convict Bonnets Exhibition is on at the Lovett Gallery, Laman Street Newcastle until Saturday 24 August 2019

The following excerpts are from Ann Hardy who launched the book.

I am honored to be launching this book because I too am passionate about preserving Newcastle and the region’s history –and considering how influential Newcastle was to the early Colony of NSW, it surprises me that there aren’t more histories written about our achievements – particularly achievements of women.

My own historical practice has concentrated on researching ‘place’ . . . I’m more orientated towards researching buildings, locations and landscapes, but eventually places reveal the lives of those who occupied these spaces – it is the stories about people that are important and give meaning to a building.

I admire the skills of family historians. The closest I got to using family history skills was when I was researching the Newcastle Industrial Girls School (1867-1871). It was at a NFHS event in 2013 where I met Jane Ison who was doing some wonderful work research on Newcastle Industrial School, instantly we had something in common, a genuine interest in these girls and each wanting to find out more about their lives. I warmly acknowledge Jane’s expertise, and greatly respect the work of family historians.

All the contributors have written some amazing stories, their research is meticulous, it must have taken many hours, days and even weeks to locate records to find out about a person’s livelihood, recording in some instances their ever-changing social status, their religion, and their misdemeanours and so on. And not to mention their numerous name changes and alias’ making research particularly challenging.

Many historians use the opposite approach, researching broad subjects to understand general histories and then drill down to more specific themes, referred to as a ‘top down’ approach. Whereas the method used by family historians is ‘history from below’, researching the ordinary lives of people – there is a sense of authenticity with this approach. This very narrow focus means research is specialized and well honed – and context comes later when bigger questions are asked.

The book also provides information about context so the reader gains a better understanding of how ‘the system’ worked in NSW, and what else was happening in colonial society. We also learn a lot about Newcastle and the Hunter Region . . . I particularly found interesting that Newcastle had a Female Factory until the late 1830s.

Unfortunately, it was a woman’s criminal record that seemed to taint her future forever, and interesting to compare alongside convict men who when pardoned were often able to forge a future with less stigma of their convict past. For women this was not always the case, they weren’t perceived in the same light – they were often considered criminals forever.
These convict women lived extraordinary lives. The fact they even survived the journey out to NSW is incredible, it usually took around 6 months to sail from England to NSW – and many died on the voyage.

As Jude Conway points out in her story about Molly Morgan, that 11 of 78 women died on their way to NSW aboard the Neptune. When women arrived they were usually assigned as ‘servants’, or transferred to the female factory at Parramatta. Treatment was harsh at female factory – some had their heads shaved and were made to wear a heavy iron collar. Often they had small children accompanying them, others gave birth during the voyage, or soon after arriving.

Some convict women become pregnant as assigned servants, marrying their employer. Women had a myriad of sometimes complex relationships and multiple marriages, some marriages were short lived due to early death caused through accident and illness.

Separation from partners often meant women had to make the difficult decision to place children in an orphan school until life improved, which didn’t always happen. There was often a cycle of poverty, with systemic institutionalization becoming the norm for many people.
The stories reveal hardship, individual struggle of women, and the rough conditions they endured. Yet you get a sense from some of the descriptions of their emotional pain and suffering– rates of anxiety, depression and home sickness were high. Many would have grieved their children and loved ones they’d left behind.

Some women had fulfilling lives, having children, made homes, nurtured loved ones, forged careers (often meant moving from place to place) and had family businesses.

Some scientific studies have looked at resilience and women, they are good at endurance sports, they have determination and stamina – maybe this has something to do with all the chasing of toddlers and the many children women traditionally had – the long days needed to care for children. Women have incredible resilience and these convict women were no exception.
Many of the convict women such as Eleanor Tomlinson had full lives. Sadly Eleanor left 3 children in England before being transported to NSW, she was sent to Newcastle twice, married twice and had 8 more children, later becoming a successful farmer alongside her husband Richard Watts. She dies aged 81 in 1868, ending a 45-year marriage, by which time there were well over 50 of the 69 grandchildren. Source : Geoff Bentley, RHS (Vic).

Others had less fortunate lives, but showed great strength in trying to make a life in the Colony, some sadly died paupers in asylums and benevolent homes, but they aren’t forgotten here, they are remembered in this book alongside other convict women for their courage.

Finally, I’d like to end with young Charlotte and John Jnr, the children of John and Ann Tucker – Government store keeper. There children were the first free-born children to live at the penal settlement at Newcastle. Their mother Ann Tucker was a convict had been sentenced to 14 yrs. Today Charlotte’s fourth great-granddaughter lives less than 1.5 km away from where she and her parents lived in 1804. 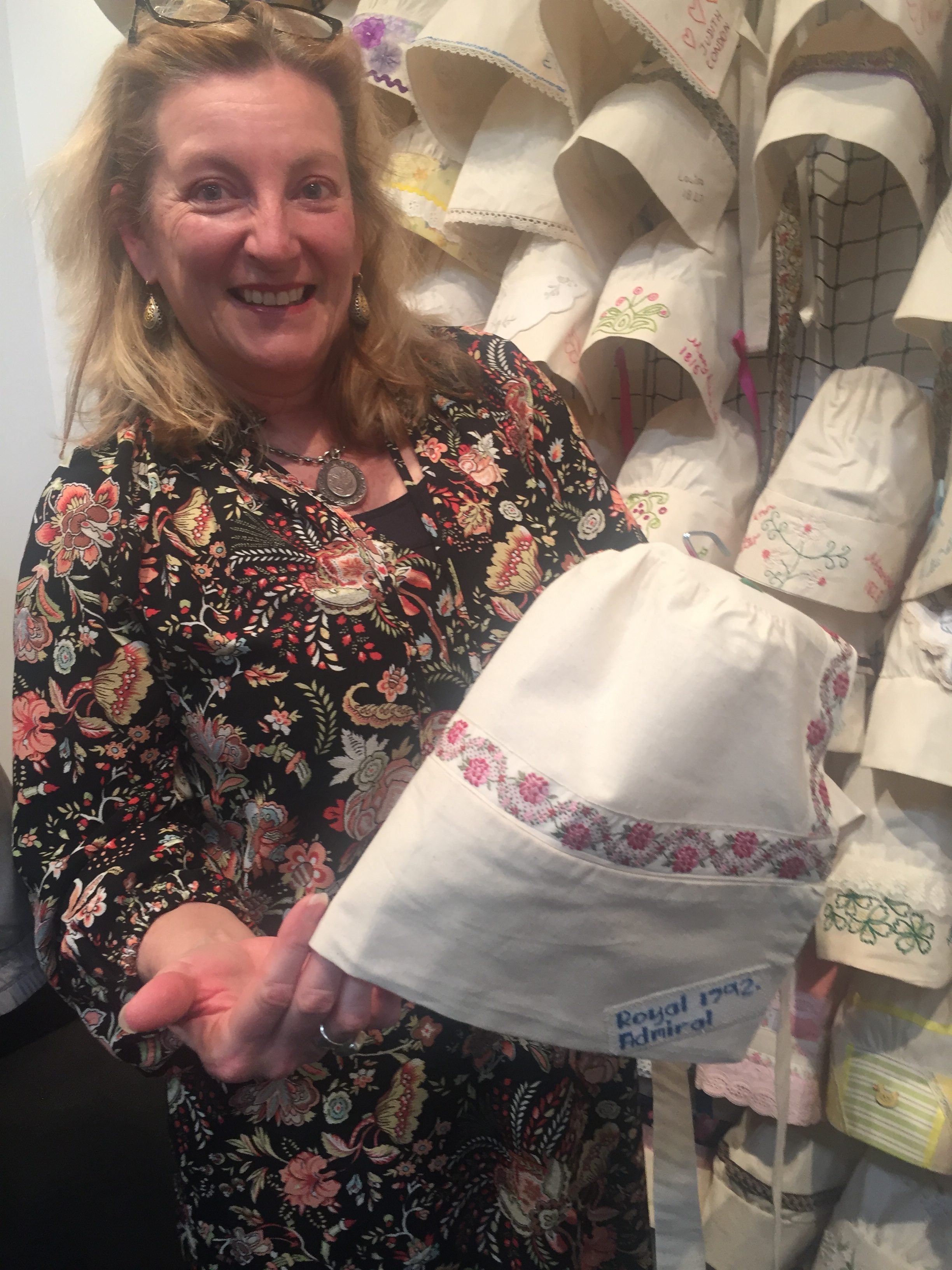 I think this represents beautifully the legacy that is still living through all of the descendants, you should be very proud of your convict women – their determination and strength was extraordinary.

Many thanks to the Newcastle Family History Society for providing images in this post.

One thought on ““They sent me North: Female Convicts in the Hunter” – Book Launch”