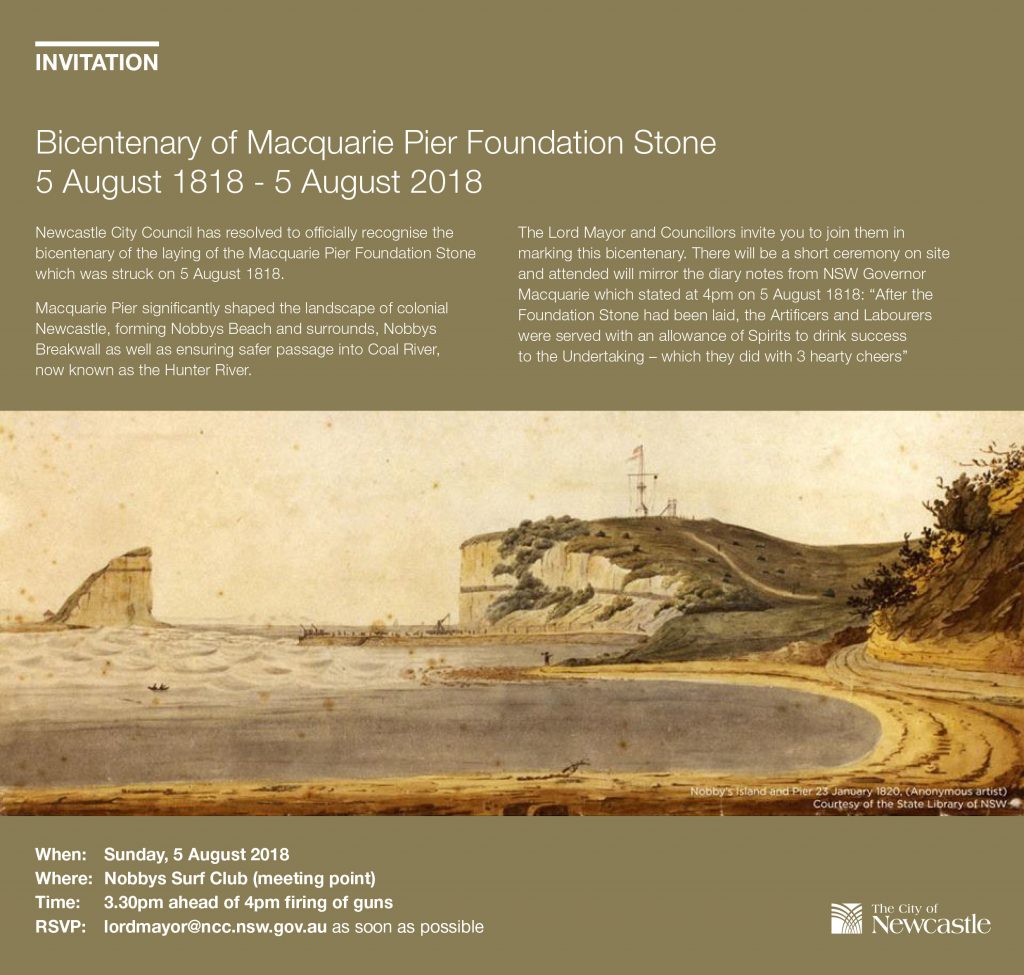 This Sunday marks the 200th anniversary of the laying of the Foundation Stone for Macquarie Pier on August 5th 1818.

Governor Lachlan Macquarie laid the foundation stone for the Newcastle breakwater, named in his honour by Commandant Captain James Wallis as “Macquarie Pier” during one of his three visits to Newcastle on the 5th August  1818. Here is the excerpt from his Journal (kindly transcribed by Macquarie University):

At 4 p.m accompanied by Capt. Wallis, Revd. Mr. Cowper, Major Antill, Lt. Macquarie, Ensn. Roberts and Mr. Meehan, I went to the shore of the channel dividing Coal Island from the South-Head, for the purpose of laying the Foundation and first stone of the Causway or Pier to be constructed across from the Main to the Island; and the stone being cut and ready, with an inscription, it was laid accordingly with all due Form in presence of the Artificers & Labourers to be employed in the construction of it; and Capt. Wallis having proposed that it should bear my name it was accordingly called after me “Macquarie Pier” — which [with] the present year 1818 — was cut and inscribed on the Foundation Stone. After the Foundation Stone had been laid, the artificers and Labourers were served with an allowance of Spirits to drink success to the undertaking — which they did with 3 hearty cheers.  “

The whereabouts of the Foundation Stone are a mystery, but we do have an estimate as to where it was originally placed. A modern plaque created in 2010 to mark the Macquarie 2010 celebrations also marks the spot near where it was laid 200 years ago. See the overlays of the Meehan 1818 plan, and Armstrong 1830 plan prepared by Russell Rigby that show the approximate original location.

As to what became of the foundation stone, it is interesting to view a set of images from the University of Aberdeen, taken around the 1892-1893 period that show a number of dwellings established in the vicinity of where the original Pier began. 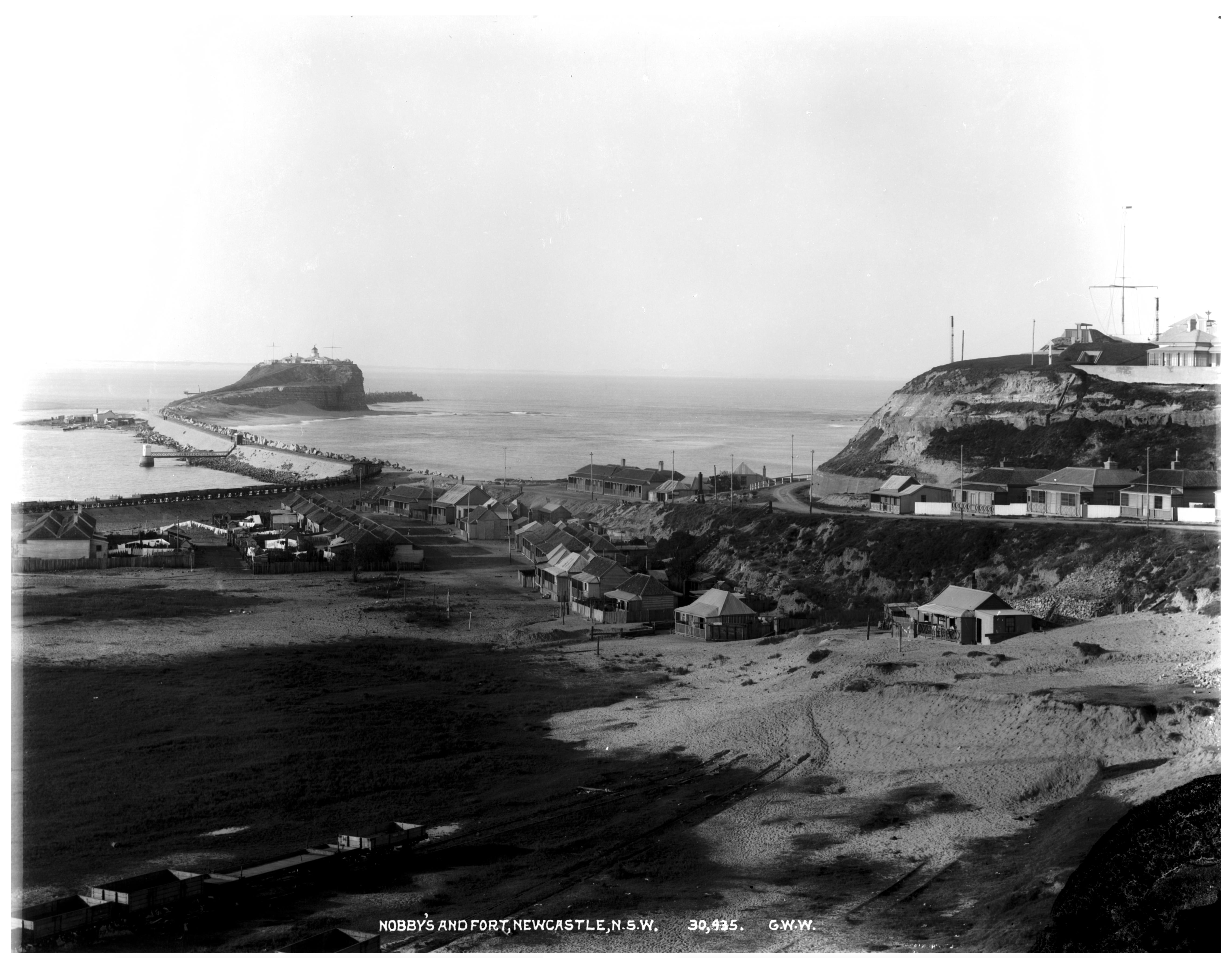 Another image taken from the other end of the Pier (circa 1892-1893) shows a mystery object, a block, unlikely to be the 1818 Foundation Stone, but it would be great to imagine that it was, and probably relocated when it was uncovered during the construction of the dwellings at the other end. Unfortunately, blocks of such quality to create a stone of that size were available there in 1818. So our quest continues. 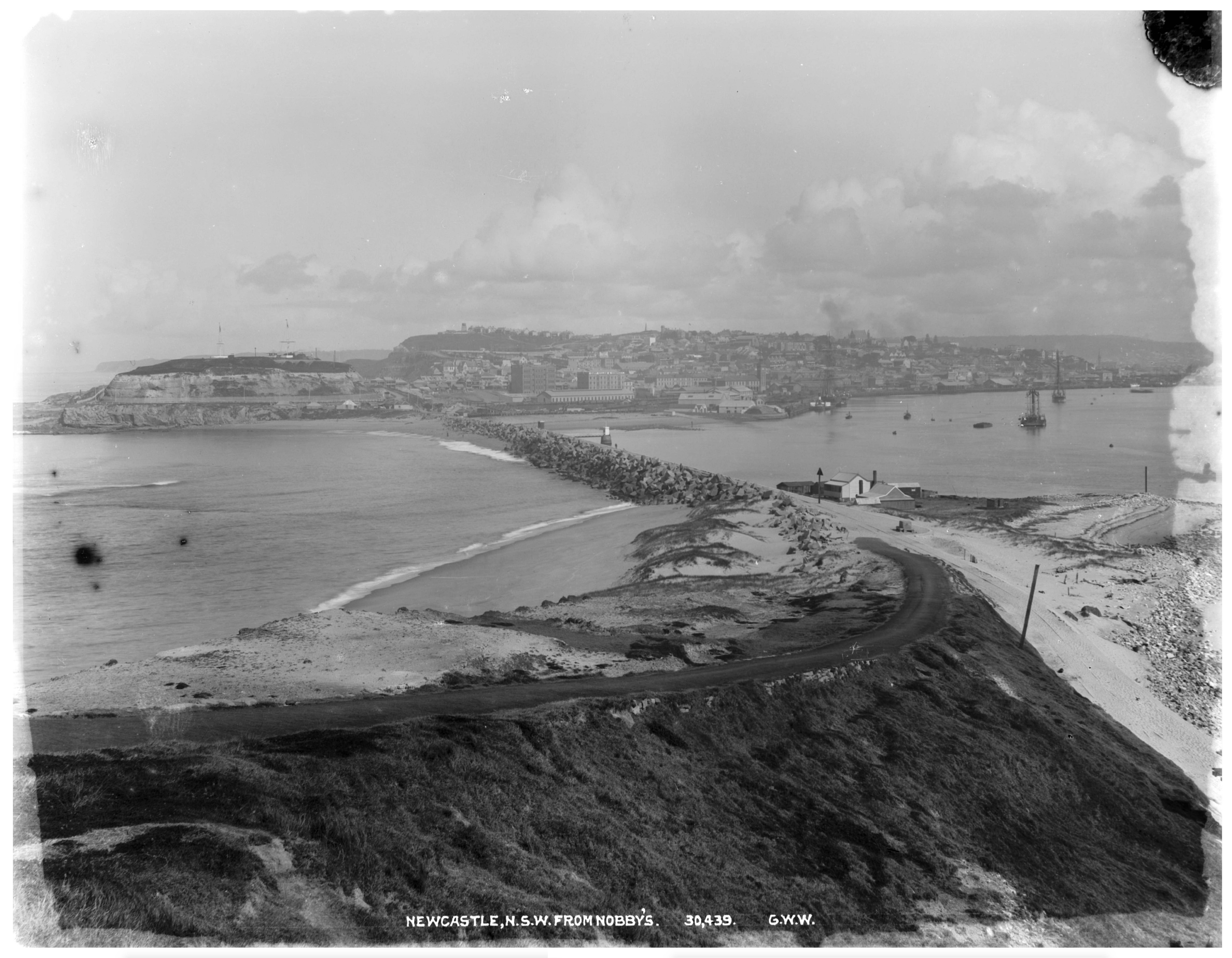 Another image of the Newcastle Breakwater (Macquarie Pier) taken from Nobbys circa post 1894 (Photograph by George Freeman https://uoncc.wordpress.com/2014/03/03/george-freeman/ ) and containing the same mystery object is here:

Russell Rigby estimates, that based on the standard railway gauge (4’8 1/2″ or 1.435m), the block may be up to about 2m square section and maybe 1.5m high on a plinth. This would give a volume up to 6 cubic m, with a mass of 15 tonnes. If he has overestimated the dimensions the weight could be about 8-9 tons. He is not sure what the base is but there is a suggestion from the shadows that the block was sitting above ground level, with a separate base which may have been a seat, or water trough for horses. We assume the block was dressed Waratah sandstone, with near-vertical faces, and there is possibly a plaque on at least the northeastern (Lighthouse) side – (see annotated photo detail for more comments) 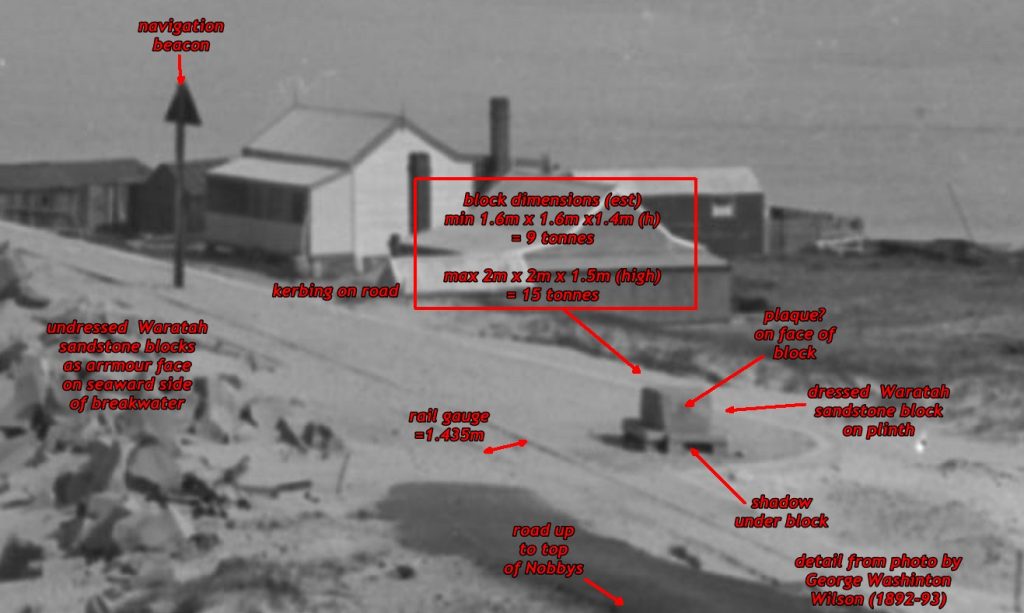 The largest block placed on the breakwater a few years later was given as 32 tons (32.5 tonnes) weight, so a block of stone of 15 tons was well within the range of the equipment available on the breakwater.
We can’t find any reference to the block on any maps or harbour charts – the maps which cover the area are not detailed enough, and the harbour charts didn’t always show detail not related to navigation and shipping.  Russell has not found a Trove reference either, using the search terms “Nobbys” “breakwater” and one or more of “plaque”, “commemoration”, “memorial”, “sandstone block” etc in either the Maitland Mercury or Newcastle Morning Herald for the period 1885-1900.

The block may have been moved some time after the last accurately datedphoto (Snowball 1901) when the southern breakwater was being extended – hopefully NOT added to the pile of rocks tipped over the end!

Further information and background on the Macquarie Pier research conducted by the Coal River Working Party  in 2010-2013 can be found on our Hunter Living Histories site here: https://hunterlivinghistories.com/?s=macquarie+pier

The Macquarie Pier was one of the major investments of the colonial period, to protect the shipping and valuable Newcastle Port whose coal trade and exports had been responsible for the beginnings of Australian economic prosperity.