When I met with Ann Hardy and Gionni  di Gravio from the University of Newcastle’s Cultural Collections to discuss projects for HUMA3003 – Arts Practicum I mentioned my interest in pursuing environmental history once I had completed my studies. Ann and Gionni suggested I undertake a literature review, researching geology of the Newcastle and  Hunter Valley Region to assist with the 3D Virtual Hunter Project:

Through the University of Newcastle’s Cultural Collections and with the help of Charles Martin, the Hunter (Living) Histories is currently undertaking a project to recreate a 3D Virtual Reality model of Newcastle’s landscape from Aboriginal times through to the free settler era. Google Earth technology is being overlaid with historical maps, images and documents.

More information regarding this project can be found below:

The University of Newcastle’s Cultural Collections has developed a thorough list of sources available through their archives, relating to geology of the Newcastle and Hunter Region, together with the J & A Brown-Coal and Allied Archives. As my placement with Cultural Collections was only 80 hours I was not able to survey all of the material available on this subject. As with any research, there is always further study which can be undertaken. Therefore, the following lists may provide a useful starting point for future researchers in this area. These sources also include further notations that I have included after my review. In addition,  details of key sources are provided in a reference list at the end of this article.

Archives Relating to Geology of the Hunter Region

J & A Brown-Coal and Allied Archives

J & A Brown maps and plans

When I began this project, my aim was to ascertain sources to demonstrate Newcastle and the Hunter Valley’s landscape from Aboriginal times through to and beyond the period of free settlement. In surveying a range of sources including both written and visual, the impact of coal mining to the development of Newcastle and the changes it had on Newcastle’s landscape was what came through most clearly . The Hunter Valley Research Foundation (now the Hunter Research Foundation) has in the past conducted research into the Hunter River

System, water resources, sedimentation in the Newcastle Harbour, the use of land for industry, urban land use and the impact of mining. This information would assist in meeting the aims of this project by helping  provide a clearer understanding of how humans have changed the landscape of the Hunter Valley and Newcastle. When the Hunter Valley Research Foundation transitioned to the Hunter Research Foundation its significant archival collection was entrusted to Cultural Collections. However, there is a large body of work which needs accessioning and recording before this archive can be accessed, utilised and used for research purposes. It is recommended that a further project be commissioned to review, accession, catalogue and digitise this extensive resource to make this important research available to the public.

A BRIEF GEOLOGICAL HISTORY OF THE HUNTER VALLEY

Hundreds of millions of years ago the area currently known as the Hunter Valley was covered by a large sea (in the form of a gulf), which formed because of the Tasman Geosyncline Subsidence. This gulf became silted up by large amounts of material washing in from surrounding land, leaving a large area of swampland in place of the sea. Generations of vegetation left their decaying remains in these swamps until the entire area was covered by a thick layer of vegetable soil which rested on the bed of marine sediments. When the land subsided again it was covered by sea for the second time. Again, the area silted up and became covered in a further layer of swamp vegetation. Over millions of years the deposits on the top layer were compressed into rock, shale and coal. Other forces caused these layers to become folded into synclines and anticlines. Wind and rain meant some areas became worn down making coal measures accessible.

A BRIEF GEOLOGICAL HISTORY OF NEWCASTLE

Beryl Nashar describes geology as “the science of the Earth as revealed in rocks.” Furthermore, Beryl believes geology can allow us to better understand our environment.

Shales are abundant around Newcastle and are associated with coal measures.

At one point, Newcastle city, Nobbys and Shepherd’s Hill would have all been islands, with silting of the Hunter River, the emergence of land to around 15 feet and deposits of sediment bringing about the current formation.

Nobby’s cliff: Nashar describes this section as approximately 80 – 100 feet tall, made up of layered beds of fine grained chert, which consists of dark grey shales and sandstones. These sediments weather differently, with the softer shales and sandstones becoming worn away. An outcrop of the Nobby’s Coal Seam can be found at sea level, covered by sand. There is a thin coal seam (underlying the Victoria Tunnel Seam) at the top of the cliff. The cliff also contains a 10 foot wide basalt dyke. Rigby and Fryer (cited by Kerr) estimated the original height of Nobbys as around 142 feet.

Signal Hill: Two splits of the Dudley Seam, are separated by 20 feet of dark shales/fossil plants. A basalt dyke has weathered and formed a ditch opposite Signal Hill.

The below sketch drawn by Strzelecki illustrates the various layers beneath Signal Hill, including conglomerate, coal, clay, sandstone and shale:

A report undertaken around 1902 by A.A. Atkinson, Chief Inspector of Coal Mines for the NSW Department of Mines described Nobbys as:

This report also states the appearance of an igneous dyke and coal-seams at Nobbys and the cliffs south of Nobbys.

The Bogey Hole: Nashar advises that the upper and lower splits of the Dudley Seam can be seen here, as well as Nobby’s Seam, which is overlain by the Victoria Tunnel Seam.

Merewether: Slightly South of Merewether, the Yard Seam can be seen at sea level, 25-30 feet above sea level is Dudley Seam, while 40 feet is Nobby’s Seam. Above this is the Victoria Tunnel Seam.

Glenrock Lagoon: Is an inlet, whereby a sandbar cuts it off from the sea. However, in heavy storms the bar can be broken forming an outlet to the sea. The water here is a mix of freshwater and seawater.

CSIRO describes the area from Newcastle to Redhead as undulating hills on sandstone and shale, terminating in high wave cut cliffs, covered in windblown sand.

Dudley: Nashar states that the Victoria Seam is at sea level here.

The report undertaken by CSIRO in 1963 highlights the significant changes European arrival and subsequent expansion has brought to Newcastle and the Hunter’s landscape. These changes include clearing, grazing and cultivation, which has led to soil erosion. Slumping has also occurred in steep areas such as the Liverpool and Mount Royal ranges after forest clearing. Despite this impact, the report also notes evidence of fires, flood and erosion prior to European arrival, which can be seen in the layers of charcoal ash and fire reddened sand.

According to documents found in the Coal and Allied Industries archive, the area of Newcastle was officially discovered by Lieutenant John Shortland in 1797. Nashar, citing Britten also notes the discovery of coal at the mouth of the Hunter River by Lieutenant Shortland that same year.

In a course given in 1977 Nashar revealed that until around 1827 Newcastle’s coal measures were mined by convicts for the Sydney market, for local consumption and for export to India. The A.A. Company had the monopoly, which was broken by James Brown’s development of the Tomago coal measures and Four Mile Creek. Completion of the Great Northern Railway line in 1857 further enhanced the export of coal. The discovery of the Greta coal measures at Anvil Creek in 1864, followed by Sir Edgeworth David’s geological studies led to the recognition and mining of the Greta coal measures. By1890 exports from Newcastle (to America and China) reached up to 2,000,000 tonnes per year. Just before World War One the Newcastle Steel Works opened, and this led to further increases in the exploitation of the Newcastle coal measures. 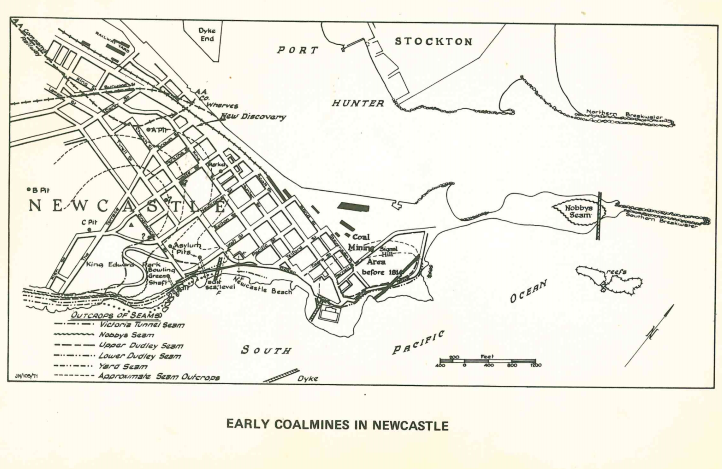 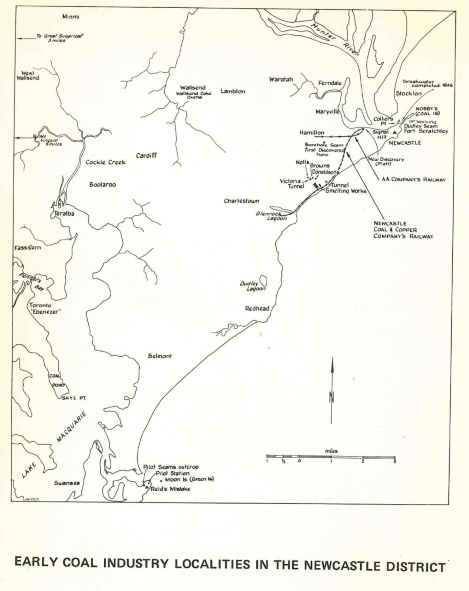 The following two diagrams from A.A. Atkinson’s 1902 Geological Survey of New South Wales – Working coal under the River Hunter, the Pacific Ocean and its tidal waters near Newcastle shows the various colliery properties of Newcastle:

In 1835 the first block of land was purchased in what would later become the suburb of Merewether. At this time the hills to the south and south-west of Newcastle City were covered by thick oak and gum trees, the flats were covered by a dense scrub of geebung, five-corner shrubs, ti-tri and a coarse bracken undergrowth. Also, the area between Bar Beach and Merewether Beach was covered by sand at quite a distance from the beach.

The following maps are not dated, however, they provide interesting detail regarding the early development in Merewether and include the Old Burwood Colliery, the Smelting Works as well as various tunnels and railway lines.

Deepening of the Newcastle Harbour

An article published in the Newcastle Morning Herald and Miners Advocate dated 5 March 1909 discussed the need to deepen the Newcastle Harbour. This need arose due to the large amount of cargo traveling in and out of the harbour, as well as Newcastle’s increasing coal production and distribution.

Nobby’s Hadland was originally an island. A 2011 report undertaken by Roslyn Kerr on behalf of the Coal River Working party states:

“Plans, paintings and sketches from the early 1800s depict rocky reefs and sandy shoals lying between the island and the southern shore of the river at Signal Hill (now topped by Fort Scratchley). Surf rolled through this shallow area.”

Breakwater works to improve the entrance to Newcastle Harbour were started in 1835 as the Macquarie Pier. The wall between Nobbys and the mainland was finished in 1848.

The Breakwater connecting Nobbys to the mainland was constructed using Waratah sandstone and quarry rock from Nobby’s Island. Signal Hill was also quarried to assist with the project.

The new breakwater created a sediment trap for sand drifting northwards along the coast. The dominant south-easterly swell produces strong north-flowing long shore currents that transports sediment up the coast. The breakwater interrupts this flow so that sand gradually built up against the breakwater to form Nobby’s Beach.

In 1855 Nobby’s headland was cut to its current height and shape, to allow for a lighthouse to be erected, which occurred in 1857.

Commonwealth Scientific and Industrial Research Organization, Australia. General Report on the Lands of the Hunter Valley, 1963.

Cultural Collections has a great range of images showing the transformation of Newcastle over time. I have reviewed a number of images. Links to some relevant images on Flickr, together with my notes can be found here.