They believe it was probably traced from an original sketch located in England at the time when the Bonwick transcripts were made.  A circa 1860s photograph of a very similar oil painting is filed at PXA 561, f.1c.

We applaud the staff at the State Library of New South Wales in their efforts to digitise important historical documents of Newcastle and the Hunter Region.

The photograph is annotated with the words that describe it as a being from ” a sketch by Lewin”. If you compare this image with the linen copy above it is clear that there is greater depth to the artwork which appears to be a painting. 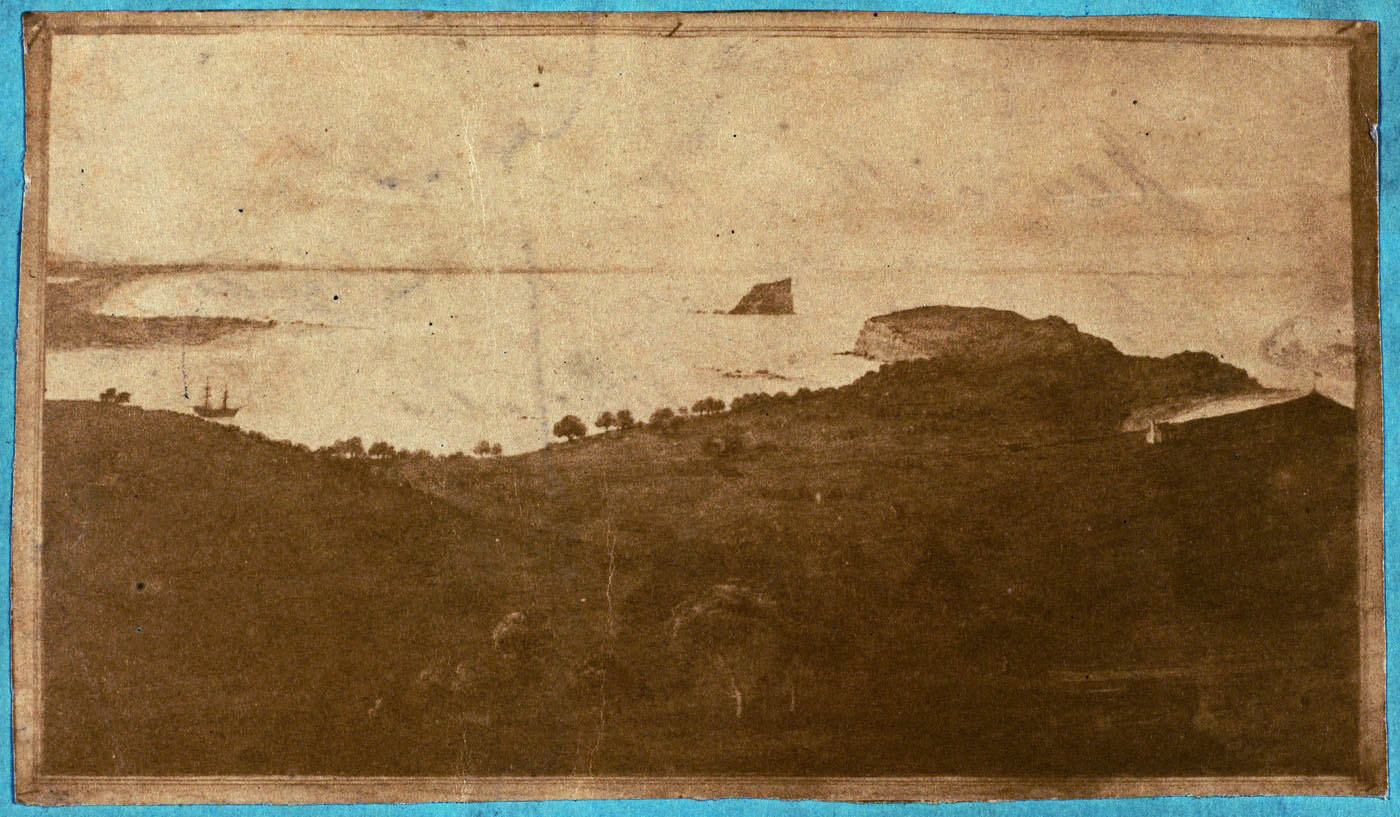 Lieutenant Menzies informed Governor King in a latter dated the 19th April 1804 that Ferdinand Bauer was on the spot and “will present you with a sketch of this delightful spot, which I have taken the liberty of naming after your Excellency.” Therefore the final work would presumably have been named “King’s Town”. Here is the correspondence from  Lieutenant Menzies to Governor King that mentions this actual work from the Historical Records of New South Wales:

I have the honor to inform your Excellency that we arrived here on Friday, the 30th of March, at noon. Previous to the vessels entering the harbour I went in a small boat to examine the situation of the mines, and fix on a place the most suitable for the settlement, which I found to be a most delightful valley, about a quarter of a mile from the entrance and south head, and close to the mines. I immediately ordered a disembarkation to take place, and began to unload the three vessels.

The next morning I examined Chapman’s Island, which would neither answer to settle on, or for a place of confinement for the worst of the convicts. For the former it is too far distant from the mines ; and with respect to the latter they could wade to the mainland at low water ; and even allowing that to be impracticable, the natives would take them across in their canoes. Coal Island will answer much better as a place of confinement, from which it would be impossible to effect their escape; but I trust there will not be any occasion for a place of that description.

An excellent mine has been opened, the strata of which continues a yard six inches thick. This shall be worked in a regular manner, so as to enable us, at a future period, to carry it on in a most extensive manner.

The mines have hitherto been dug by individuals in a most shameful manner. Never have they been at the trouble of leaving proper supports, leaving them to fall in anyway, but until I receive your Excellency’s commands on this head, the chief miner shall take care that this is not done in future.

Fifty more convicts, if sent here, could be worked to great advantage, as I could wish to keep a quantity of cedar and coals always at hand, so as not to detain any Colonial vessel which your Excellency may send here ; and I am well assured, even with the present small military establishment, that they could be managed with the greatest security. Those already here I make work hard, and they perform it in the most cheerful manner. As their legs were getting bad from being ironed I released the greatest part of them, that I might not be deprived of their labor, and as we are always sufficiently upon our guard to counteract any schemes which they may be mad enough to form.

I have directed the provisions to be issued twice a week, so that should they abscond they will have very little to depend upon.

Mr. Bauer will present you with a sketch of this delightful spot, which I have taken the liberty of naming after your Excellency.

The storekeeper, McGuire, and the soldiers are very anxious for their wives and families. They request your Excellency will have the goodness to allow them to embark in the first vessel ; and may I beg to be favored with the names of those who are to be victualled from His Majesty’s stores.

A few guns could be placed to great advantage on a commanding height above the town so as to prevent any vessel, in case of being seized by convicts while up Paterson’s River, from getting out of the harbour.

In 2013 we contacted the University of Cambridge attempting to locate the original oil painting of Newcastle painted in 1804 by artist Ferdinand Bauer.

We wrote saying that we believed that the original may have been held in the former collections of the Colonial Institute London, and now may have been moved to the collections at Cambridge University, and stating the source of the information from the annotations on an early photograph of the item that is held in the State Library of New South Wales. “The original is in the Colonial Institute London.”

We attached a copy of this annotated item in addition an enhanced image, as well as an image of a linen copy of the work made in 1860 and also located in the State Library of New South Wales. We said that we believed the 1860 copy may be have made from the original painting. The enhanced images of the photograph contain artistic details not present in the 1860 copy. Hence our excitement that the photograph was taken (we hope) from the original painting in their collection. This may have been made at the time of the Bonwick transcripts, as a copy of the painting was also published in the Historical Records of New South Wales, Volume 5 page 368a:

We had conducted a search through their catalogue ( http://janus.lib.cam.ac.uk/db/node.xsp?id=EAD%2FGBR%2F0115) and have not been able to find anything answering the description.

We also hoped that, after examining the images attached, they would be able to confirm whether anything resembling this work is currently held in their collections.

They replied stating that none of their former librarians or archivists were able to recorgnise the painting, nor we able to assist with its current whereabouts. So we would be very interested if anyone comes across any further clues, or manages to locate the original.

One thought on “Ferdinand Bauer 1804 View of Newcastle”