Each month we invite students, alumni or academics to contribute a blog post on themes as part of the Histories on the Fringe project. For February Dr Jude Conway has contributed to ‘Women’s history’ theme.

In the past Newcastle was often called a man’s town when the economic focus was on coal mining and steel making. However the city is now coming of age with a more gender equable job market and new histories more inclusive of women. So, although the limited number of histories featuring women’s activities in Newcastle and the Hunter Valley in the past contribute to women’s histories being described as “fringe”, that label is becoming less and less appropriate.

Two of the latest offerings to go on-line are my own PhD thesis, “The Newcastle women’s movement in the 1970s and 1980s through the lens of Josephine Conway’s activism and archives”, and “Birth of a Dream” by Suzanne Romani, a history of Jenny’s Place women’s refuge which started life in the suburb of Islington.

My thesis was completed after trawling archives from many sources, most notably the Jessie Street National Women’s Library in Ultimo Sydney, a feminist volunteer library where my mother’s papers had been lodged, and I also found the occasional gem in the University of Newcastle archives. As is done these days, a hardcopy of any completed thesis no longer just sits gathering dust in the university archives, rather they are all uploaded to NOVA repository, the University of Newcastle open access website.

The Abstract outlines the thesis:

From the late 1960s, women in the industrial coastal city of Newcastle, New South Wales joined women around the world in agitating for a broader role in all areas of society. Josephine Conway was one of those women. Josephine raised awareness of, and campaigned on, many of the feminist causes of the 1970s and 1980s. She was passionate about women’s healthcare, protested against women’s objectification in the media, and lobbied for legislation that offered legal parity for women. She fought never-ending battles for the right to legal and affordable pregnancy terminations; and campaigned for equal employment opportunities and the provision of childcare services. Josephine supported women’s activism in the peace movement and for women’s ordination; and was involved in the blossoming of feminist spirituality and creativity in Newcastle. 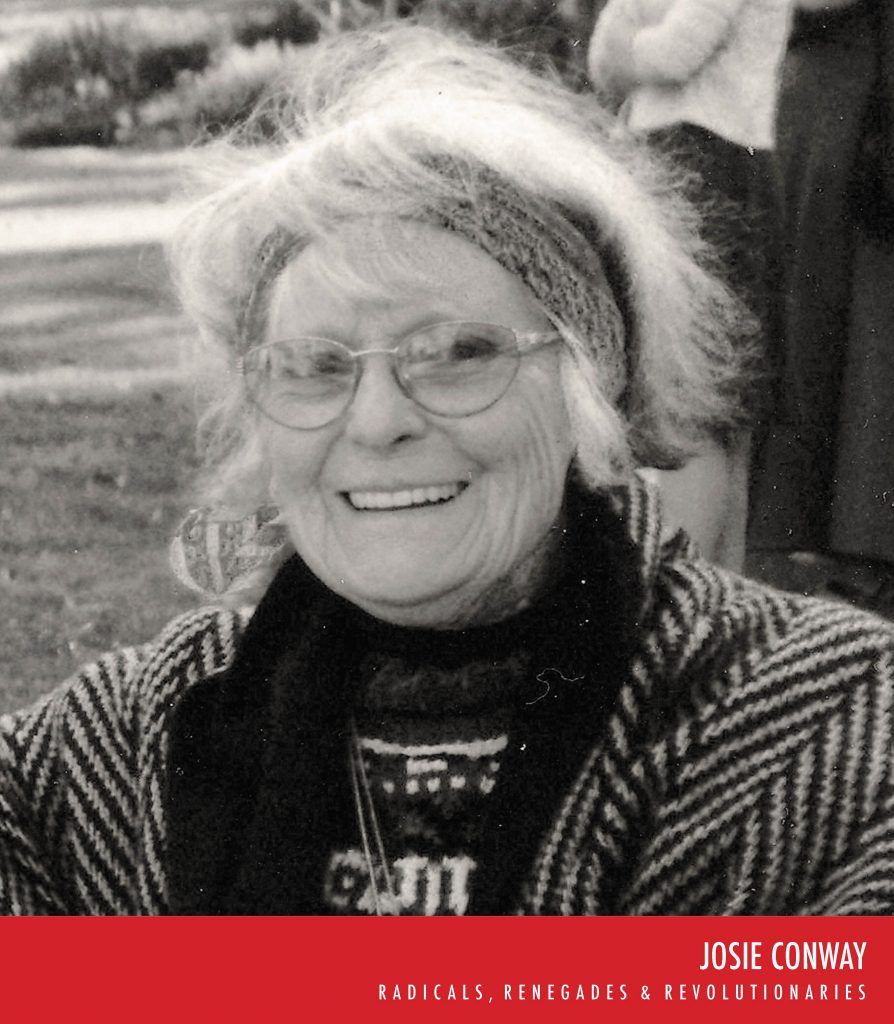 Using Josephine’s extensive archives as a lens, supplemented with oral histories from her fellow campaigners, the thesis explores their pathways to feminism and theirs shared feminist actions. It dissects the women’s groups which Josephine joined, and the modes of operation and relationships within them as well as. the actions that were carried out in pursuing their causes. The themes that emerge are, first, that Josephine’s role in the women’s movement was that of the ‘committed individual’ posited by Gerda Lerner as necessary for social change. Second, the thesis demonstrates the wide range and value of the macro and micro-actions undertaken by Josephine and her cohorts in mounting and maintaining effective campaigns. Third, this study reveals the web of relationships and the flow of ideas, tactics and artefacts along transnational and national feminist pathways, and between the capital cities and the regions, which were essential for bringing about nationwide change. In

doing so, it reveals an important regional story which has not previously been included in histories of the Australian women’s movement.

The thesis has over 80 images and 4 maps and is free of academic jargon. It was described by one examiner as ‘a delight to read’. So, for anyone interested in local history and/or women’s history, it is worth a look.

The second recent offering, “Birth of a Dream” (2017) describes the challenges faced by a voluntary collective of women in setting up and running the first feminist refuge for women in Newcastle. The author Suzanne Romani is not a trained historian, she is a creative writer. Although Suzanne stuck to the basic rules of well-sourced history, with her talent for words she has written a lively and engaging story about a refuge that has been operating for nearly 45 years. Although written in 2017 the history of Jenny’s Place women’s refuge was only posted online this month.

Prove that women’s histories are no longer “fringe” and enjoy your reading.