The papers of Alison Douglas Adam, of the Newcastle Naval Brigade, and Writer of the Royal Australian Naval Reserve (R.A.N.R) were donated by Mr David H. Dial OAM to the University of Newcastle’s Cultural Collections (now Special Collections) on 15 October 2014.

The donation was inspired by the launch of the Rodoni glass negatives depicting sailors and troops of the Australian Naval and Military Expeditionary Force (ANMEF) in German New Guinea in September 1914.

Alison Douglas Adam, of Wickham (N.S.W.), was a clerk at a Newcastle shipping agent at the time of enlistment in the ANMEF. His rank in the ANMEF was ‘Writer.,’ and, as such, was responsible for most of the ‘written’ information connected with the ANMEF in New Guinea.

The papers of Alison Douglas Adam,
of the Newcastle Naval Brigade, and Writer, R.A.N.R. 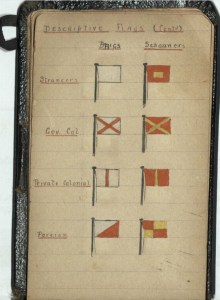 ADAM’S NARRATIVE OF THE EXPEDITION

“AUSTRALIA AT WAR”.
HER FIRST GREAT ACHIEVEMENT
THE CAPTURE OF GERMAN NEW GUINEA

A9052(vii) Second copy of the above; some differences in pagination. Ts, carbons.

PHOTOGRAPHS OF FIELD-MARSHALS AND ADMIRAL

A9052(xvii) – (xix) Photographs of Field-Marshall Earl Kitchener, Admiral Sir John Jellicoe, Field-Marshall Sir John D.P. French. (These photographs appear to be prints manufactured early in the Great War, however, the original of the photograph of Admiral Jellicoe might date from some years earlier, as he appears in a Captain’s uniform.)