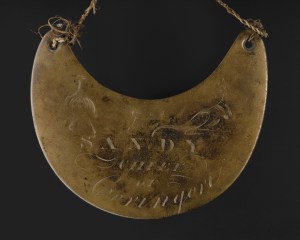 During January 2022 Dr Alison Clark from National Museums Scotland contacted HLH, she is conducting provenance research on a brass breastplate in their collection.  Dr Clark would like to find out more about the individual who was given the breastplate, and asks who gave it to him, and how the breastplate came to Scotland.

“The plate, thought to be an early example, is engraved with the words ‘Sandy, Chief of Coringori’ “

“The breastplate came to the Museum through a Scottish collector who never visited Australia and I’m wondering if Sandy was working for a Scottish pastoralist and that’s how the breastplate made its way to Scotland and into the hands of this collector.”

Aboriginal breastplates, known also as king plates, queen plates and gorgets, originated as military gorgets worn by British Army officers and were modelled on those given to Native North Americans by French and British colonisers in the 18th century. Those given to Aboriginal Australians were often up to twice the size of a military gorget, and were made of brass, bronze or occasionally copper and were sometimes silver plated. Blank breastplates were made by companies in Australia and England and often purchased in bulk with the engraving then arranged by the purchaser. It is believed that the first Australian Aboriginal breastplate was given in 1815 to Bungaree by Governor Lachlan Macquarie as strategy to bring about peaceful relations between Aboriginal people and Europeans.

As tools of colonisation breastplates were particularly popular with Scottish pastoralists in Queensland and New South Wales in the mid to late 1800s. These pastoralists gave breastplates as a way of singling out individuals as leaders within their community. The assumption was that the individual would then act as a go between for the pastoralist and the local Aboriginal population in order to ensure the successful and peaceful establishment of the pastoral station. These ‘gifts’ demonstrated the inability of colonists to understand existing systems of authority, imposing European ideas of social hierarchy and ownership onto Aboriginal people. They are symbols of dispossession from land but also symbols of resistance and strength.

Many of these breastplates ended up in museums, and the National Museum of Australia has the largest public collection with a significant resource available online on the history of these objects.

The Department of Scottish History and Archaeology at National Museums Scotland, Edinburgh care for an Aboriginal breastplate associated with ‘Sandy, Chief of Coringori’. The plate is made of brass and has a deep semi-circle shape. Instead of the usual metal cord, the plate hangs from a twisted plant fibre cord the end of which is bound around a kangaroo bone awl. A fibre bag is also twisted and knotted around the cord. The plate is engraved with the words ‘Sandy, Chief of Coringori’ and surrounded by an engraved emu and kangaroo.

The breastplate came into the collections of National Museums Scotland in 1985 when the Royal Scottish Museum and National Museum of Antiquities Scotland (NMAS) were formally merged. The NMAS purchased the breastplate as part of a group of ninety-seven objects from the Duns Collection, which came up for sale in 1903. All of the objects purchased were of Scottish origin with the exception of this breastplate. North Berwick born Professor Reverend John Duns (1820-1909) was a Professor of Natural Science at New College, Edinburgh, a fellow of the Royal Society of Edinburgh, a member of the Society of Antiquaries of Scotland and served as Curator when the National Museum of Antiquities Scotland moved to Queen Street in 1891. Duns had an eclectic collection including English, Irish and Scottish archaeological material, Egyptian antiquities, and material culture from Asia, North and South America and Oceania. The breastplate is the only Australian object listed within the 1900 valuation report of his collection and much of the ethnographic material within that collection reflects areas of the world colonised by Scots during the 1800s; New Zealand, Fiji, Vanuatu and the Arctic and Australia. Given the breadth of the collection and the fact that Duns doesn’t appear to have travelled it is thought that his collections were purchased from auction houses or through his networks in philosophical and antiquarian societies in Edinburgh.

“The name ‘coringori’ inscribed onto the breastplate provides several clues as to who Sandy was and who might have given him this breastplate.”

The name ‘coringoori’ is recorded in the papers of William Anderson Cawthorne (1825-1897) a British artist and teacher, held by the State Library of New South Wales. Cawthorne had been sent a list of Aboriginal families from the ‘Coringoori Tribe’ living in the Patrick Plains area of the Singleton District, recorded in the 1870s by Scots-born pastoralist D M Waddell (1). The list also contains a note stating that ‘’all the names I have enclosed are natives of Patricks Plains and of the tribe Corringorri. I hope to see a few more soon and will do my best to get full particular’.(2) Whilst the list does not contain Sandy’s name it is the only archival mention of a language group with the spelling Coringori. Coringori may be an Anglicized version of Gringai, also spelt as Guringai or Guringay.

From around 1853 until the mid-1900s there was also a pastoral run named Cooringoora located at Bingara, south-west of Inverell in Northern New South Wales.(3)

The land for the run was squatted on by Charles Bull from around 1838 with Bull naming the run Big River Station. In 1853 Bull went into partnership with Edinburgh-born William Murray Borthwick and together they renamed the station Cooringoora. Did Sandy work on Cooringoora Station?

More research is needed to establish links between Duns and either Sandy or the pastoralist who commissioned this breastplate to be made.

3. The run is listed in Canon J. Carlos W. Stretch’s Toponomy: Place Names of New South Wales, Their Origin, Meaning and Locality, p.134. Stretch describes the meaning of the run name as ‘a grass tree’. University of Newcastle Archives A9082.

Emeritis Professor Lyndall Ryan also comments on the breastplate saying it is interesting that the kingplates use Emu and kangaroo  as symbols of the Colony of NSW. The symbols now appear, albeit in reverse order, on the Australian coat of arms.

‘Sandy’ is short for ‘Alexander’, often the name of white men of Scottish descent. (Ryan)

It appears that the decoration depicting an emu and Kangaroo was a particular style and breastplates with it were produced as blanks ready for inscription and seem to have been popular within NSW in that period. (Dr Clark, 2022)

Dr Ann Hardy points out that a breastplate was given to ‘King Sandy’ by Daniel Eaton (overseer at Peter Macintyre’s run, Byron Plains, near present day Inverell, north-west region of NSW). In a piece written by Prof. Lyndall Ryan (full article is here) ‘King Sandy’ is described as ‘friendly and trustworthy’.

Bob Syron suggests ” the spelling Coringori, is another Scottish spelling. A lot of Scottish people occupied the Barrington, Gloucester areas in the 1820s and worked for the AA company.”

Regional researcher Leigh Budden suggests the origins ‘Coringori’ are from the Upper Hunter Valley and likely from the  late 1830s or very early 1840s.

“The Lake Macquarie missionary Threlkeld who recorded the Local Language had his eldest son Joseph managing cattle runs in the upper Hunter valley in the 1830s and 40s.  This period of time was after the big land grants, violence and conflict by the English pastoralists and graziers. The resistance of the Aboriginal People of the Hunter Valley was largely eliminated by 1840.

Joseph was a fluent speaker of the east coast (Lake Macquarie) Language so could have introduced it in giving names for made up “tribes” as part of the gorget presents to friendly Aboriginal People.   Gurangori would have literally meant ‘inland blacks’ in the Language that Joseph was fluent in, that is inland from the coast.

I’ve also found King Sandy on two blanket lists 1842 and 1843 from the Scone district (attached) – Aged around 30 with a wife,  and two children in 1843;  Aboriginal name recorded as “Woollilie” and “Worrey” (confident it’s just an Englishman misunderstanding the name when it was said in Gamilaraay and writing it down differently – but it is the same Aboriginal Person being recorded)

On the blanket lists you will see his “tribe” written down as Pages River and location Murrurundi in 1843;  ‘tribe’ is (I think) Yauccudi and Scone in 1842 – getting pushed further north each year!

Several of the Mob names were recorded for the Gamilaraay speaking People of the Upper Hunter back in those days,  but I haven’t come across Yauccudi  before – although someone might have a better go at deciphering the writing from 1842,  this would help me track it down further.” (Leigh Budden)

If you have any other information please leave a comment.