Broadmeadow Locomotive Depot:
A Proposal For Its Conservation and Adaptive Reuse

This post honours the memory of the late Dr Bernard (“Bernie”) Curran AM. Bernie, at the time of his passing, was working with the rail heritage community to establish the Broadmeadow Locomotive Depot as a Newcastle regional heritage centre. This post has been compiled with his help, and that of his fellow colleagues Shane Blatchford, Paul Battle, Bill Storer AM and Peter Scaife.

To establish the Broadmeadow Depot (1924-1994) as a Heritage Centre of national significance, which tells the story of Newcastle and its Region through a focus on Rail, Maritime and Industrial heritage.

To inspire the Community to be proud of its past achievements, and look forward, with enthusiasm and creativity to the future.

Promote the idea of a Heritage Centre for Newcastle, which brings together artefacts and stories associated with our rail, maritime and industrial heritage, so that they can illustrate links to the social, economic and cultural development of the Region.

The future possibilities will be explored by regularly updated exhibits from the University and Community groups.

Why is the Broadmeadow Locomotive Depot Important?

The Broadmeadow Locomotive Depot (1924-1994) is part of a continuous railway story that started in 1831 when the Australian Agricultural Company established the first railway in Australia.

It was established to provide stabling and refueling facilities for locomotives, and to perform routine maintenance and minor repairs on rolling stock, especially locomotives, used in, or passing through, the Newcastle Region.

This was due to the importance of railways in the distribution of coal and goods from the Newcastle and Northern districts. Broadmeadow had marshaling yards for assembling wagons and locomotives into trains for dispatching around the State.

1991: The original Roundhouse (No.1) superstructure was demolished; turntable remained functional

2020/2021: All locos and rolling stock moved to Sydney for storage. The Broadmeadow Locomotive site will be left with 2 turntables, one roundhouse, and some buildings managed by benign neglect. 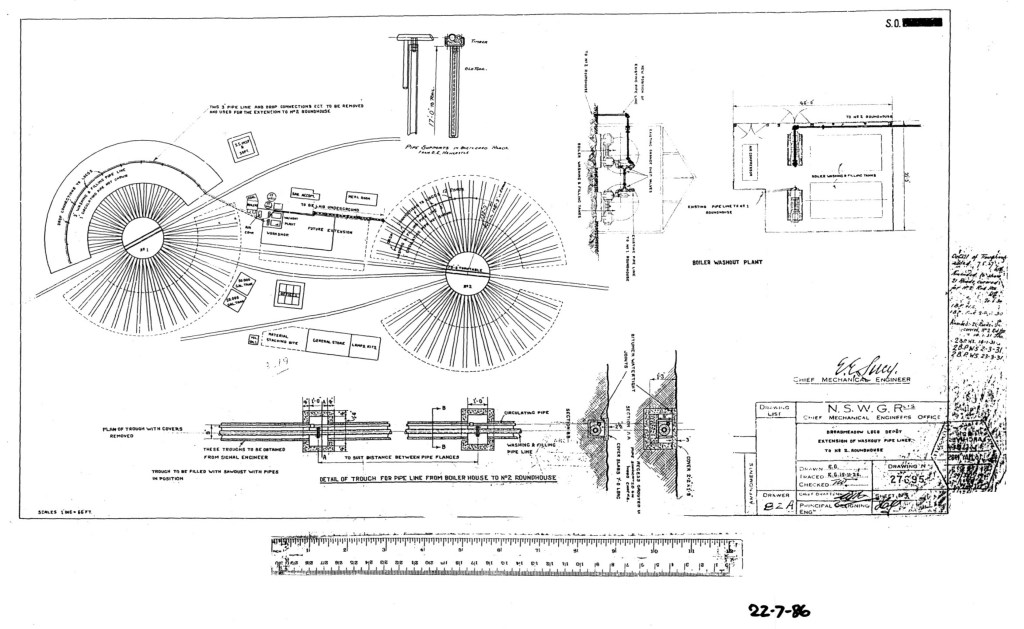 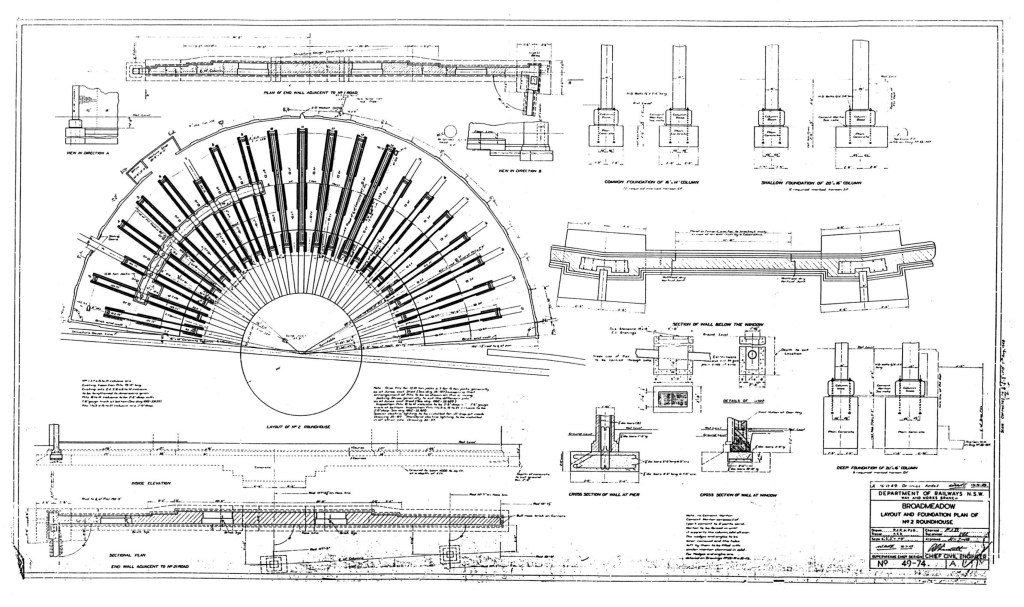 The Emergence of Roundhouses

In 1906, Chief Mechanical Engineer of the N.S.W. Railways, Ernest Edward Lucy, saw the need for modernising railways across the State.

He sent a delegation around the world, to look at world’s best practice.

The outcome was the adoption of Roundhouses, identified from Northern American Practice, and culminated with the building of the first Roundhouse in N.S.W. at Port Waratah in 1911.

Plans for the depots at Broadmeadow and the Cardiff Workshops, were also drawn up, in anticipation for the impending arrival of the B.H.P. Steelworks and associated industries. Railways were crucial to transport raw materials and finished products throughout the region and nation.

This planning made Newcastle and the Northern region self-sustaining. A quality which was thoroughly tested, and later proven through the dark days of the Second World War when Australia came under enemy attack.

The city and region became nationally protected as the “Newcastle Fortress”.

Railways were at the nucleus of Fortress Newcastle, and the Broadmeadow Depot was the main depot for the region. It was the second largest depot in N.S.W., and the only depot with two conjoined turntables in the world.

If an invasion of Sydney were to have happened, the plan was to demolish the Hawkesbury River Bridge. Newcastle would then again be its railway system, as it had been, until 1889.

This was part of the Plan of Fortress Newcastle, which had been overseen by Essington Lewis, Minister for Munitions and Industry. This is a story that has now been told.

The Age of Steam

The depot itself, and surrounding areas, also tell the stories of the technological development of locomotives, and the changes up until the end of the age of steam in 1973.

The last steam locomotive, an AD 60 Garrett 6042, left the depot to be driven through a ceremonial banner at Broadmeadow Station by the Minister of Transport Milton Morris. This marked the end of Steam in N.S.W. 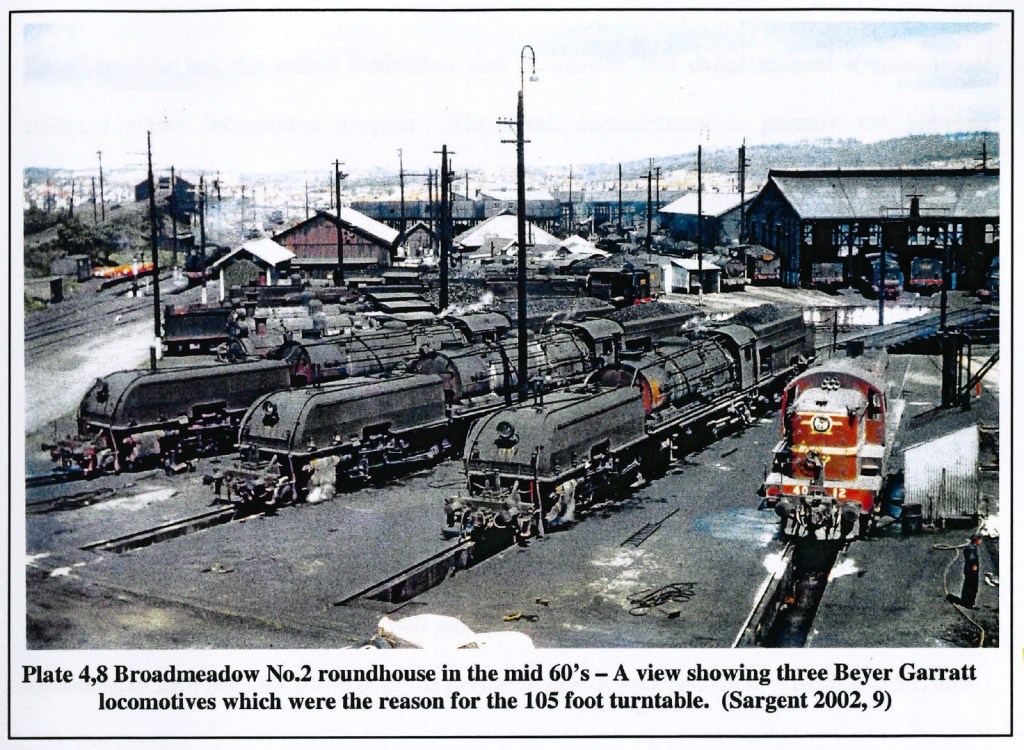 The Age of Diesel and Subsequent Changes

This was not the end of Broadmeadow, but the beginning of the diesel era. Many changes were to come with the technological modifications and the buildings that were constructed for this transition.

By 1978 the remaining steam era structures had all been removed. The continual changes can be seen within the environs of the site.

The Broadmeadow Locomotive Depot tells the story of the social, economic and industrial evolution of the Northern region; and its expansion from the Hawkesbury River to the Queensland Border and the North Western areas.

The Broadmeadow locomotive depot is a tangible reminder of the employment and prosperity generated for the workers and their families through the establishment of railways.

Once can never truly understand what the gravity of a bond between people and community can truly mean, unless they were part of it.

The depot was the last operational depot in New South Wales, closing on the 24th December 1994.

Reports Recommending the Retention of the Broadmeadow Locomotive Deport

Several reports, commissioned by the N.S.W. Governments, over successive years, have recommended the retention of this valuable site; its buildings and environs.

The following quotations are from these reports.

The Broadmeadow Locomotive Depot Heritage Study (a.k.a. The “Doring Report”); first published 1995; second edition, 2006, funded by the NSW Government and prepared prior to the closure of the Depot, concluded:

“The Broadmeadow Locomotive Depot is assessed as having very high Regional and Local cultural (heritage) significance”.

“while most other depots in the State are in inland areas, and far out on railway routes which no longer use them, Broadmeadow Depot is near the middle of one of the major population centres in NSW, and in the centre of a large network of still active or potentially active railway lines. The Broadmeadow turntables, which make a major contribution to the depot’s heritage significance, are only a short distance from the recently rediscovered remains of NSW’s oldest locomotive turntable, built-in 1857, at the west end of the former Honeysuckle Point Depot and Workshops. Broadmeadow Depot was the successor to Hamilton Depot, which in turn was the direct successor to Honeysuckle Depot. The historical connection, and ready accessibility to the public, give Broadmeadow Depot additional significance”.

Broadmeadow Locomotive Depot: A proposal for its conservation and heritage reuse, MA Dissertation, University of Birmingham, 2003.

“A conservation plan should be prepared as soon as possible to protect the Depot’s undoubtedly valuable heritage, following accepted Australian practices”

“Its strong railway heritage is undeniable and has been seminal in Newcastle’s and the State’ s industrial history. It is located at the centre of a large population resource; many residents have ‘railways’ experience or associations.”

“From a heritage viewpoint, the Broadmeadow Depot Roundhouse Study Area is an excellent site for a railway workshop/museum. Having been a steam loco depot for 50 years, Broadmeadow would provide a historically appropriate setting to store and display old locomotives etc.

At the same time, locating a rail workshop/museum at Broadmeadow would attract visitors and provide a means and purpose for physically conserving the roundhouse and turntables and would conserve their association with the maintenance of railway rolling stock.

Such an arrangement would help retain and enhance the significance and integrity both of the Broadmeadow Depot Roundhouse Study Area, and any collection of historic rolling stock housed there.”

“All Aboard” (The “Azarias Report”), 2013, was a landmark study funded by the NSW government with UK railway heritage experts involved. It reviewed all Transport Heritage sites in NSW, including Broadmeadow and said:

“Broadmeadow was without a doubt one of the most important rail heritage sites in Australia. It was here that the steam era on the main lines of Australia ended.”

“To a visitor of any imagination, the potential of the Broadmeadow site leaps out”.

A key recommendation was:

“Under the leadership of a small team inside Transport for NSW, detailed Master Plans for the Large Erecting Shop and Broadmeadow, should be prepared, concentrating on the widest possible public benefit to be obtained from the sites”.

All recommendations were accepted by Ms Berejiklian (with Press Release), the then Minister for Transport, and yet, no master plan for the Broadmeadow site was ever prepared.

This Report has not yet been released by the NSW government

“Hunter Development Corporation and Newcastle City Council will investigate the potential for medium density housing and business uses which do not impact on heritage values and respond to flooding risk.”

The Broadmeadow Locomotive Depot site is the most significant railway site in New South Wales, and is unique in the world heritage sphere.

The fundamental role of Newcastle in the story of rail in Northern N.S.W. can now only be celebrated by the sympathetic development of the Broadmeadow site for rail heritage.

A Master Plan should be developed, as recommended by the Azarias report, and be accepted by the government.

In preparing this plan, community input should be sought to obtain the widest possible public benefit.