The Donation of the Hunter Valley Meteorological Journals to the UON

These records documented historic weather records from stations located in the Hunter Valley, and of such significance and importance to rival the Belfield Climate Records of Algernon Henry Belfield in Armidale.

The Belfield Climate Records are historical weather diaries (dating from 1877-1922) of New England grazier Algernon Belfield have now been internationally recognised for their high quality in a new publication from the UK’s Royal Meteorological Society.

The results — published in the Royal Meteorological Society’s Geoscience Data Journal — found that the Eversleigh records are on par with official observations from the Bureau of Meteorology. The article can be accessed here: https://rdcu.be/bQo8v or here: https://rmets.onlinelibrary.wiley.com/doi/full/10.1002/gdj3.80

The records have also been accepted for the International Historical Weather Data Base ACRE, one of only four locations in Australia to meet the International Atmospheric Circulation Reconstructions over the Earth Initiative (ACRE) requirements.

The Team assembled around the Belfield Climate records included one of Uni of Melbourne’s rising STEMM stars, and 2014 Eureka Prize recipient, Dr Linden Ashcroft, who was, at the time a PhD Candidate at the Uni of Melbourne and a Senior Researcher at the Centre for Climate Change (C3), Universitat Rovira i Virgili (URV) Avinguda de Remolins, Tortosa, Spain.  She kept a watchful eye on the project’s early stages, later becoming its prime investigator.

Conjoint Professor Howard Bridgman in the University of Newcastle’s School of Environmental and Life Sciences led the project from its inception, and with the help of citizen scientist volunteers from across the world, shepherded the “scientific” digitisation from the physical records to excel spreadsheets for deeper analysis.

The Hunter Valley Weather records were digitised and uploaded to the UON’s Hunter Living Histories site on the 10 January 2018. See: https://hunterlivinghistories.com/2018/01/10/hv-climate-data/

Who recorded the observations?

Thanks to the work of UON PhD candidate and Wyndham Family descendant, Don Seton Wilkinson, the recorder of these meteorological journals was identified.

The weather records were signed by “M. Wyndham”, presumably Marion, eldest daughter of Charles and Emily and dated from June 1891 till end of 1907.

The place they were recorded was Wollong, NSW, near Mount Vincent. It was the home of Charles Wyndham, 9th son of George and Margaret of Dalwood, and his wife Emily, neé Glennie.

By the 25 August 2020, the Wollong weather records had been scientifically digitised, (meaning transcribed into excel spreadsheets to create a scientific data set), by a team of climate scientists and volunteers under the leadership of UON Conjoint Professor Howard Bridgman and published on the Hunter Living Histories Website here: https://hunterlivinghistories.com/2020/08/25/wollong/

The one mystery that puzzled Howard and the team; why did the meteorological observations come to a sudden halt at 1907, since they knew that Marion Wyndham lived until 1928?

The answer came through in a matter of weeks with an email from the Local Studies Librarian at Cessnock City Library.

[4 September 2021 Update] Thanks to the Wollong data entry volunteer, John Margetts, who, whilst transcribing the 1928 data records has noted in his email to Professor Howard Brigman that:

Whilst in the stacks of the library, Kimberly O’Sullivan uncovered three boxes of original archives of the Wyndham Family containing the rest of the weather ledgers recorded by Marion Wyndham from 1908 up until her death in 1928.

The ‘Wollong’ archives also included the personal diaries of Marion Wyndham (dating from 1872-1928) and Mona Arline Wyndham (1893-1963), all written while living at ‘Wollong’; as well as journals, personal correspondence between members of the extended family and to outside business partners, financial records, and farm diaries.

Howard’s response was to this treasure trove was:

“MAGIC!!   I cannot tell you how happy we are to receive your email.”

The three boxes arrived at the University’s Special Collections on 3 March 2021.

Box 1_3. Copies printed from microfilm of meteorological observations taken at the property. January 1948-September 1956 (with gaps).

Box 1_6. Location of rainfall stations at ‘Wollong’ description and sketch by B. Wyndham. 1939.

Box 1_7. Correspondence and circulars from government weather bureaus. 1907-1954 and undated.

Box 1_12. Folder of photographs of the Wyndham family, some personally identified, or identified as being at ‘Wollong’, others unidentified. (Scroll Down to bottom of linked page)

Box 3_2. Sepia photo of large formally dressed group of men and women arranged on the step of a building undated but c. 1890s-191 Os.

Box 3_3. School work book with brown paper cover with word ‘Arithmetic’ written on cover. On the inside cover are the words ‘Lucy Emily Glennie August 6th 1861′

Box 3_7. One letter on mourning stationary to ‘Mrs. Glennie’ 18 January 1881 on the death of their brother Alexander.

Box 3_21. Readings From The Liturgy And Other Divine Offices Of The Church Volume 11, Part I – The Subordinate Offices Of Prayer And Proper Services For Holy Days And Season. Published in London 1852. Inscription inside cover ‘George Wyndham’.

Box 3_22. Red leather bound book, described as an ‘Album’ hand written note in front of book claims it was given to to King George IV* by his librarian. Hand

Box 3_22. Red leather bound book, described as an ‘Album’ hand written note in front of book claims it was given to to King George IV* by his librarian. Hand-written book, writing difficult to decipher, content indecipherable. Two dates: 1820 and 1862. [*1762-1830]

After Professor Bridgman’s survey of the records, and identification of what to begin with, Dr Ken Thornton, historian and volunteer, began the digitisation process using our new book scanner.

The first two items selected were: 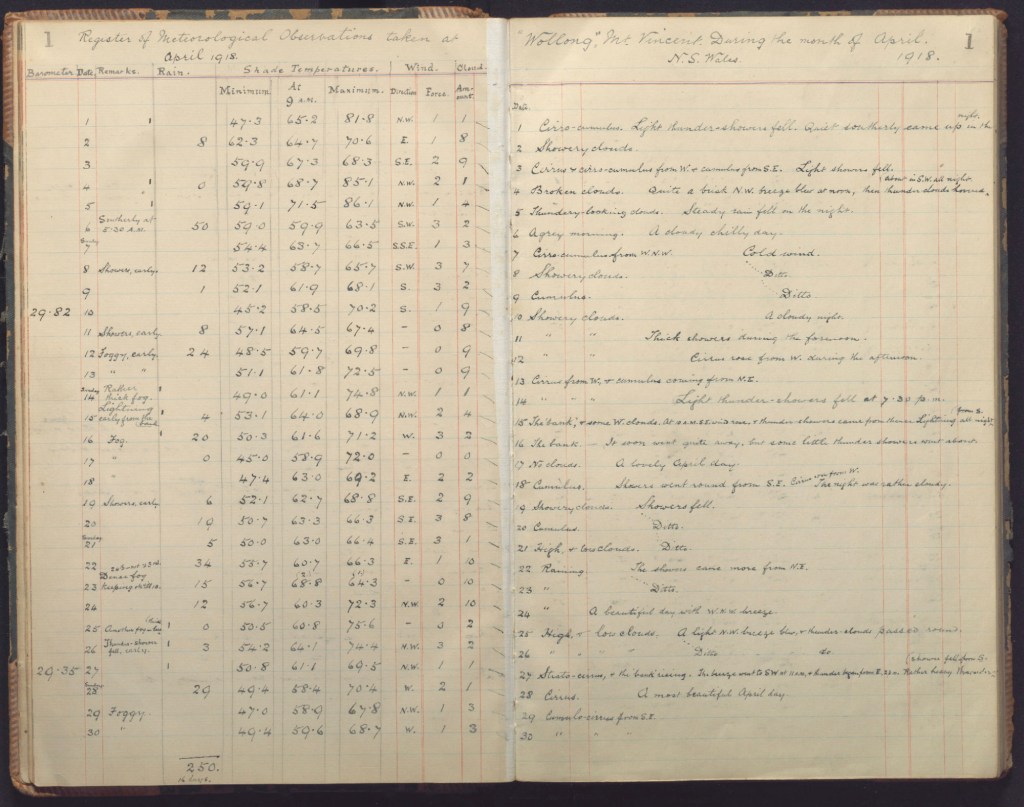 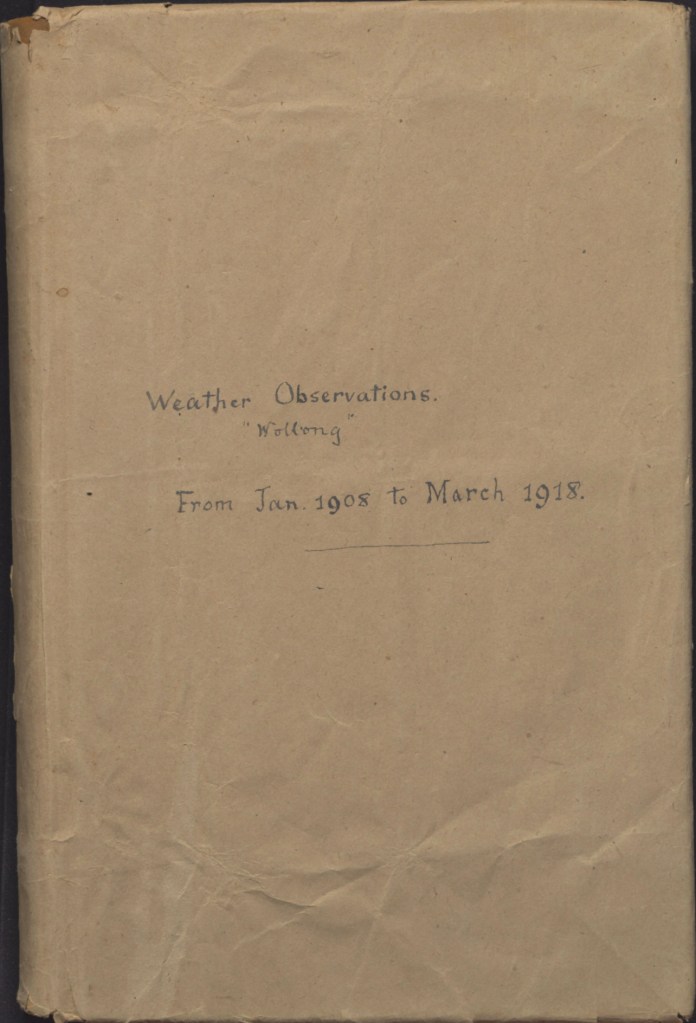 As of 20 April 2020 according to Professor Howard Bridgman:

When all is complete we will have a weather data set from Wollong extending from 1891 to 1956, an amazing record collected by some very dedicated people from the Wyndham family.  These records are not part of the Bureau of Meteorology except for rainfall. There are at least two benefits from this very long data set:

We are also very grateful that the UON Library will be soon recruiting for two paid student internships to work on the Wollong Project, the successful applicants estimated to begin work in late June 2021. This opportunity will provide paid work and experience for the two students to be part of a project of international proportions in assisting scientists to better understand our climate and the implications of ongoing human practices that influence it.

Who was Marion Wyndham?

When Marion Wyndham commenced recording Meteorological Observations at ‘Wollong’ in June 1891, at the relatively young age of 18 years, there were several maternal and paternal family precedents. Her maternal grandfather’s records were available to her at ‘Wollong’, and she would have seen the rainfall records kept by her paternal uncle, John Wyndham, and cousin, Harry Wyndham at Dalwood. She meticulously recorded her observations almost every day until her death in 1828.

Charles Wyndham was the ninth son of George and Margaret Wyndham of Dalwood. Emily was the second daughter of Rev. Alfred Glennie (14/01/1811- 25/10/1870) and Anne Ferris (01/01/1816 – 04/11/1891). Marion’s maternal grandfather, Alfred Glennie, was the twelfth son of William and Mary Glennie of Dulwich, Surrey, England, where his father had the well-known Dulwich Grove Academy or Dr Glennie’s Academy. Alfred was one of four Glennie brothers to migrate to Australia: James, Henry, Benjamin and Alfred.[2]

James, 24, arrived in 1824 per the Guildford, in company with his friend, Francis Forbes, the new Chief Justice, and received a grant of 2080 acres at Falbrook, north of Singleton. Alfred arrived aboard the Marquis of Huntley, 30 January 1828 as a free settler, aged 17, and went to his brother, James’ property, ‘Dulwich’. In June, He was appointed Clerk to the Bench of Magistrates at Patrick’s Plains (Singleton), in June 1828, and in September 1829, also received appointment as Deputy Postmaster at Darlington (another name for Singleton). Henry arrived in 1832 and was the Doctor and Coroner at Singleton until his death in 1880. Henry married Elizabeth Ferris in 1833 and Alfred married her sister, Anne, in 1836. A younger brother, Rev. Benjamin, arrived in 1848 with Bishop Tyrrell, and worked mainly in Queensland, where the Glennie School, Toowoomba honours his memory.

Following his marriage, Alfred purchased ‘Glenthorne’, of 324 acres, on the Allyn River, East Gresford, in 1838, remaining there until 1850, when, following ordination at Christ Church Cathedral, Newcastle and appointment to Brisbane Water (Gosford) Parish of the Church of England, he leased the property to Gilbert Champain. His Meteorological Journals from April 1843 to December 1848, recorded at ‘Glenthorne’, and those recorded at Lochinvar, March 1864 to October 1870, following his return from Gosford, are held in Special Collections, Auchmuty Library, University of Newcastle.[3]

Alfred also kept a detailed journal of his daily activities, with frequent references to the weather and his separate Meteorological records, not all of which have survived. The publishing editor of his Journals – 1855 to 1870 – wrote of Alfred’s weather records,

“He recorded regularly and methodically what seems to us, more than 125 years later, the most useless pieces of information. However, it is possible that someone will find those details relevant in a special sort of way…. It shows his interest in recording information for future but improbable, reference; it shows a scientific turn of mind too. He gives the elements of rain, cold, thunderstorms, wind and oppressive heat a great deal of attention.”[4]

Those ‘useless pieces of information’, have found a particularly valuable use as vital evidence for the reconstruction of past weather patterns, enabling the measurement of climate change over time, and the effect of industrialisation.

Alfred Glennie’s elder brother, Rev. Alexander Glennie, also kept meticulous weather records from 1834 to 1880 in South Carolina. Seven bound volumes include thermographic, hygrometric, and barometric readings, as well as the number of inches of rainfall each day. Charts note the wind direction and velocity and include observations about the weather (fine, cloudy, variable, loud thunder, and similar remarks). Selected observations were made three times each day. Volumes 1-6 (1830-1843, 1844-1849, 1849-1852, 1853-1857, 1858-1862, and 1863-1880) contain daily records for All Saints Parish. Volume 7 (1838-1867) contains monthly averages for All Saints Parish. An eighth Volume (1868-1880) contains daily records for Georgetown.[5]

Marion’s uncle, John Wyndham of Dalwood, had one of seven private observatories reporting weather data to the Sydney Observatory between 1865 and 1893. Maitland born Henry Russell, who became assistant Government Astronomer in 1859, Acting Director in 1862-64, and Government Astronomer in 1870, re-established the meteorological stations discontinued by his predecessor. Dalwood was one of them.[6] The monthly rainfall totals between 1865 and 1893, were compiled by John, until his death in 1887, and thereafter by his son, Harry.[7]

Marion’s paternal grandfather, George Wyndham, irregularly recorded some details of rain, wind and temperature (for which he used a registering thermometer) in his Diary, between 1830 and 1840, but insufficient to be useful.[8] Letters from his parents and siblings in England contain many references to the keeping of rainfall and temperature data, including references to a registering thermometer and barometer.[9]

Another of Marion’s paternal uncles, Reginald Wyndham of Leconfield, also kept a daily diary for many years, including weather descriptions, but not in Marion’s formal mode.[10] His son, Reginald Jnr’s diary for 1889 to 1892 is similarly tantalising.[11] Rainfall is recorded but it is not always clear which property he is at, as he moved frequently between Dalwood, Leconfield, and Abbotsley on the Liverpool Plains.

Details of Marion’s education are unknown, but most likely was educated at home, by her parents and grandmother. Her parents were educated in a similar way. Marion’s records reveal clear and easily read handwriting, a good vocabulary, correct spelling, and well-developed powers of observation. A forensic search of family albums has failed to find any photographs of Marion.

The Wyndham family has a long history of making and preserving its records. Meticulous stud records for their cattle and horse studs were kept by several of her uncles. In England, there are 900 years of Wyndham family records, housed in 278 archive boxes in Somerset Records Office, The National Archives, Taunton, Somerset. Marion’s meticulous meteorological observations may well be among the most important.