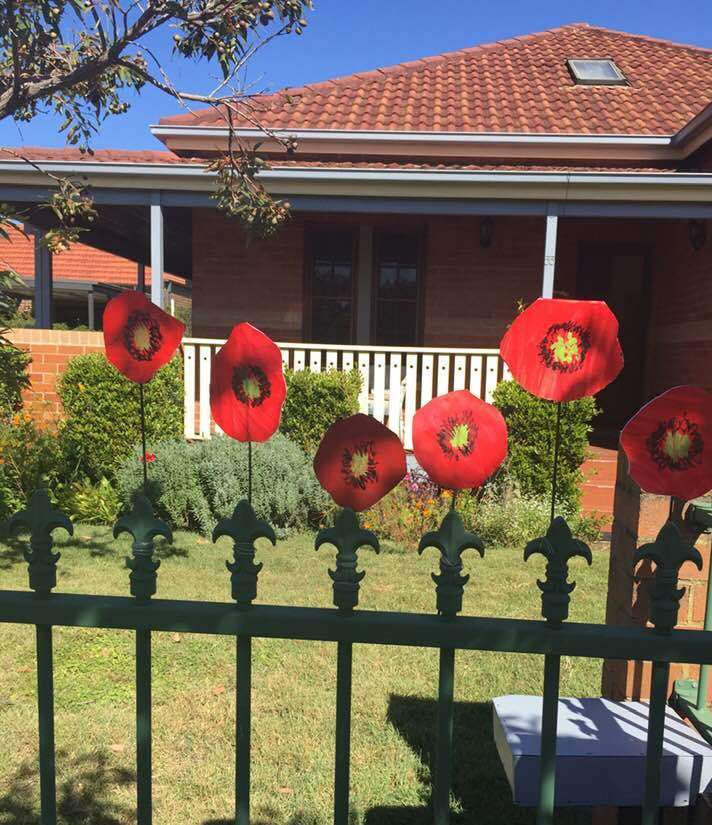 We are documenting people’s participation in Anzac Day @ HOME in the Hunter Region during the COVID-19 Lock-down 2020.

Given this year’s public Anzac Day ceremonies have been banned across the nation, many communities have responded by deciding to more-or-less democratise the commemoration of Anzac Day.

There were many Anzac style commemorations and decorations in people’s front yards on Anzac Day 2020. If you would like to contribute your photos or stories please contact us at archives@newcastle.edu.au

“This morning Darren & I participated in the Dawn Anzac Service from the bottom of our driveway. There was only one other neighbour doing the same.
We opened the car doors and had the dawn service loudly on the speakers. We wanted everyone to hear it in their bedrooms. Slackers. It went even louder when the last post, reveille & National Anthem played.

Darren himself is a returned veteran from East Timor x2 & Bouganville. He was a member of the army for 6 years before changing to the RAAF for 21 years.
My father, who lives on the other side of Raymond Terrace, is a returned Vietnam Veteran and was also working in Saudi Arabia for the first Gulf War. A member of the RAAF for 25 years. My father and several other neighbours held their own service. Several of them, returned Korea & Vietnam Veterans.

There are other family members who served and have returned. There are others that haven’t. There is a family member, great great uncle who died in France.
My family is small and family tree unknown. Mostly East European – Poland, Ukraine, some German. I do know my step-grandfather was in the Polish Underground resistance. Family members were taken from Poland and were refugees in German camps before immigrating either to UK, USA or Australia.”

Kind regards and good luck with the project,

“We went at 5.45 along a couple of houses to a service – three little children opposite and their mum played violin, flutes and bugle on a recording in the background. We had our torches and it was beautiful . . . Tim was in full airforce uniform looked so handsome. Amazing what this virus had brought out in people.”  Varelle Hardy, Hamilton.”

“The residents of Moira Street Adamstown, had a dawn service and another at 9 30am. With social distance we had 3 pipers, a young Yr 12 student sound the last post, 2 young singers from Waratah Girls Choir plus many residents decorated their fences wreaths were made and laid. So proud of everyone.” Marilyn Bridges, Adamstown, NSW.

I taught my children how to make a traditional laurel wreath. We decorated and hung lanterns and put flags up at our fence.
In the pre dawn my children Scarlett 11 and a Caesar 9 dressed in their school prefect and cubs uniforms. We had a portable radio which we had the service playing and stood out on our driveway, the children laying their wreaths.
Many people were out in our street and someone nearby was playing bagpipes.
We spoke of the meaning of ANZAC day and why we commemorate it. It was probably the best service we have done.
Clare Lewis
Medowie. NSW

We are the Henwood family, a family of five from Medowie NSW. This year due to the Covid-19 virus and our children being home from school and daycare due to self isolation, we took the opportunity to talk to our children about the meaning of ANZAC Day and why we celebrate it.

In the past our two oldest children had attended the ceremony at our local memorial with us and we decided that we would like to continue to remember our ancestors and honour all of our servicemen and women by listening to the ABC broadcast from our driveway at dawn and participating in two minutes of silence with other neighbours in our street who were also doing the same from their driveways.
In the days leading up to ANZAC day the children and I used paper plates to create giant red poppy flowers which we stuck to candle holders which we used to line our driveway. We also put some on our front door and hung an Australian flag above them on the door.
Before dawn we lit the candle holders and joined many of neighbours out on the ends of our driveway, we listen to the ABC broadcast and as the sun began to rise we stood quietly on our driveway holding two minutes of silence. Later we and all our neighbours turned to towards our neighbours flagpole and sung the Australian National Anthem. It was such a special and memorable way to pay our respects and something we will always remember.

Many thanks to Associate Professor Dr Heather Sharp and Yvonne Fletcher, UON School of Education for their collaboration.