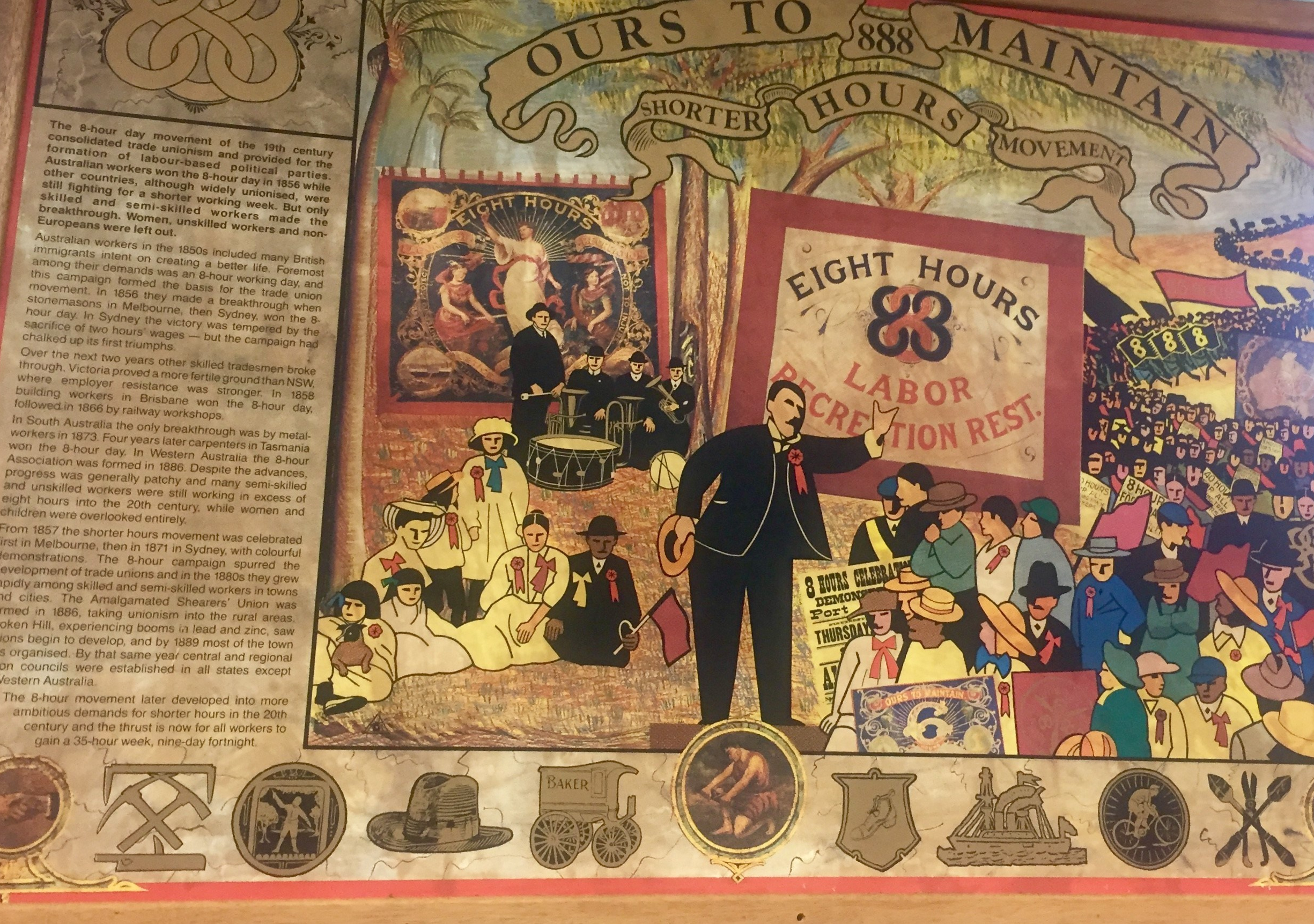 You are welcome to visit the “150th Anniversary of the Newcastle Eight Hour Day” Exhibition and Library until Friday 6 December, 2019.

The Eight Hour Day Movement
The current Hunter Workers organisation can trace its origins back to the first regional body of combined unions (Eight Hour Committee) formed in 1869 in Maitland and Newcastle. The Eight Hour Committee instituted its first procession in Newcastle in 1883 and convened the formation meeting of the first Newcastle Trades and Labour Council in December 1885, which, though relatively short lived, indicated a growing move towards independent industrial organisation in the region.

Many marvellous banners and elaborate floats were constructed over the years and a festival like atmosphere prevailed in the district each year on the Eight Hour Day.
It was the Eight Hour Day Demonstration Committee which successfully campaigned for the Trades Hall to be built in 1895 and members of the committee became the Hall’s trustees.

May Day
Although May Day was celebrated in some form in the region in the early 1890s it did not take on any great significance until 1921 when miners declared May Day a holiday and instituted celebrations on the coalfields. By 1923 these celebrations included grand processions. Newcastle itself hosted its first May Day procession in 1931 although the day had been celebrated from 1923 in other ways such as concerts, sports events and carnivals.

Why did these changes come about?
There were a number of reasons for these changes. First, the eight-hour principle had largely been won throughout the union movement. Second, a new militancy had developed. This was the result of the WW1 conscription issue, the 1917 strike, and the Russian Revolution. The question of the international solidarity of the working class was on the agenda – hence the importance of May Day.

A Proud History of Union Achievements
The many decades of struggle for the 8-hour day, for the 40-hour week, early closing, workplace health and safety, a decent living wage, job protection, for peace and against war, and for protecting and maintaining the environment, are each a chapter in this region’s union history. We should not forget that human labour created the wealth on which our standard of living is based. It is the workers of the region that improved the overall standard of living and made the valley what it is today. Many of the images show the pride that workers place in what they create.

Trade Union Culture in the Hunter Region
Through its organisations, the working class exhibits a rich cultural history. Its activities in this field have been varied, ranging from sports, theatre, processions, music bands, educational colleges, debating societies to the Workers Club Cooperative Movement.
This exhibition focuses on the 8 Hour Day & May Day celebrations and processions.
These annual events were, and still are, an important aspect of working-class culture in the Hunter Region. The banners themselves are part of a tradition going back to the nineteenth century and so too the bands.

The photographs show people expressing a desire for the righting of injustices, for progress towards better living standards, and for building a society where peace, prosperity and wealth can be shared by all.

There is also an extensive Library at the Hunter Unions Building containing historic sources and archives. Please contact admin@newtradeshall.com or Rod Noble rod50405@gmail.com for further information.