The daguerreotype was the first practical method of taking a lasting image and was available to the public in 1839. The process was invented by Louis-Jacques-Mandé Daguerre, a French artist and a chemist who based it on Joseph Nicéphore Niépce’s process of heliography (sun drawing), a French inventor, who is credited as the inventor of photography. Despite its prominence, daguerreotypes were very expensive, and only the wealthy could afford to have their picture taken. Therefore, it was almost entirely replaced by 1860 with advanced and cheaper processes (e.g., Tintype, Ambrotype).

Daguerreotypes were mostly used for portraits, but it was also used for recording topographic subjects and important events.

In 1829 Louis-Jacques-Mandé Daguerre was in contact with Joseph Nicéphore Niépce, on recommendation of an optician. Niépce who had already managed to produce an image using a camera obscura through the process he invented called heliography, whereby a pewter plate coated with bitumen was used. Although he had managed to obtain permanent pictures, it took eight hours of exposure to produce one image making it impractical to take portraiture. He later replaced the pewter plates with silver coated copper sheets, after discovering that the iodine reacted with the silver producing silver iodide, which is more sensitive to light.

During their correspondence, Niépce drew up a contract between him and Daguerre restricting him from divulging any information regarding his process or he would be penalised. However, after Niépce’s death in 1833, Daguerre solely continued to experiment with the silver iodide coated copper sheets and discovered that the latent image on an exposed sheet could be developed faster if exposed to fumes from warmed mercury, in comparison the new method could produce an image within thirty minutes than hours. And for the stabilising agent Daguerre used common salt solution, however later he adopted thiosulphate of soda as the stabilising agent. While the contract between Niépce and Daguerre was inherited by Niépce’s son Isadore, who renewed the terms between him and Daguerre. Admitting that the old process had been improved to the limits solely by Daguerre and therefore bore his name only.

Daguerre began making successful pictures using his improved method from 1837. On 19th August 1839, at a meeting in Paris, the Daguerre made his process public, who in exchange was granted stipend by the French government in exchange.

The calotype was developed in 1840 by William Henry Fox Talbot, an English scientist, and inventor using paper rather than the commonly used metal sheets, marking the creation of paper negatives. The paper was sensitised with silver chloride, then exposed in the camera as the silver chloride would be darkened in proportion to its exposure to light, the process was known as a printing-out. The positive which was not part of the process, but was usually produced by the existing salt print method.

The primary difference between the calotype and the other process was the higher sensitivity of the paper and the development of the latent image by the use of gallic acid before and after the exposure. Exposure times with the calotype were much shorter than with the photogenic drawing process making them comparable to those of the Daguerreotype, around an hour or more.​

However, calotype could not compete with the daguerreotype in the commercial market, since the daguerreotype was more detailed whereas calotype used paper as negative, as the texture and fibers of the paper were visible in prints produced from it, leading to a grainy image, and it did not require a license.  Talbot had patented his process restricting public use of calotypes without spending some money, whereas Daguerre made his process publicly available. Another primary problem with calotype was the use of the paper as negative.

The ambrotype or the collodion positive is a process that creates a positive image on a glass sheet using the wet plate collodion process — where one side on the clean glass sheet is coated with a layer of iodised collodion, which is a solution of nitrocellulose in ether and alcohol, then covered with silver nitrate solution. Then the sheet is loaded inside a camera in a dark room, after which it is ready for exposure while still wet. Exposure time could vary from sixty seconds or more depending on the brightness of the lighting and the speed of the camera lens.

The sheet was then developed and fixed; the resulting image was unique, consisting of a negative, usually underexposed. However, when viewed against a dark background, appears to be a positive image: the bright areas look black, and the exposed, opaque areas appear relatively light. Therefore it was usually mounted against a dark background then installed in a case.​

Unlike a daguerreotype, an ambrotype image can be viewed from all angles.  For which the process became popular, even though the finished result lacked details and tonal range of the daguerreotype.​

The image would be either normal or reversed (left to right) according to whether or not the emulsion side of the negative lay against the black backing.​

The ambrotype was based on the finding of Fredrick Scott Archer, an English sculptor in the 1850s, but the process is named after James Ambrose Cutting, an American photographer and inventor who patented the process in 1854 in Boston, United States.

The ambrotype was later superseded by tintype photography, despite both used similar process, and are hard to differentiate especially if cased​. 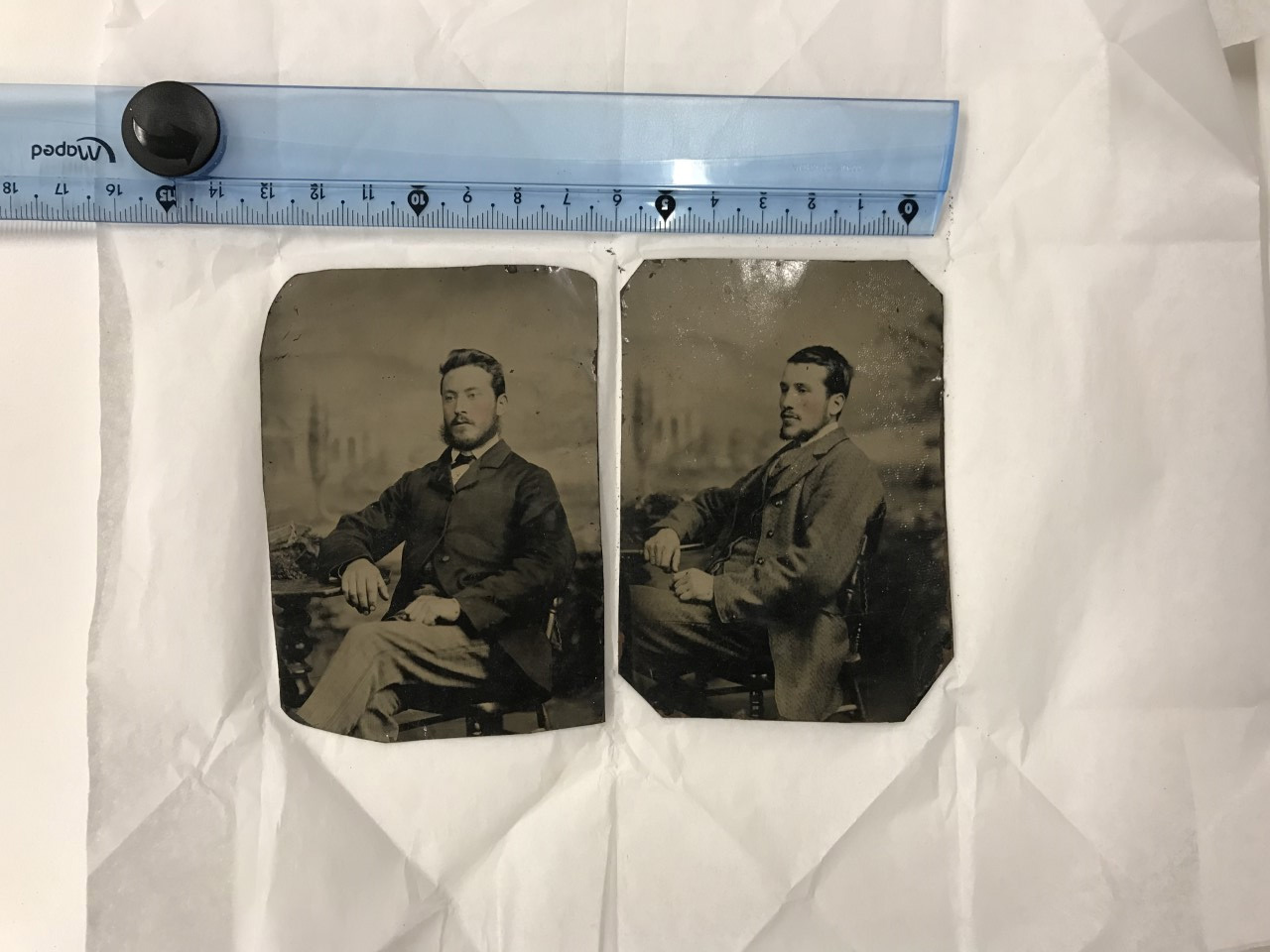 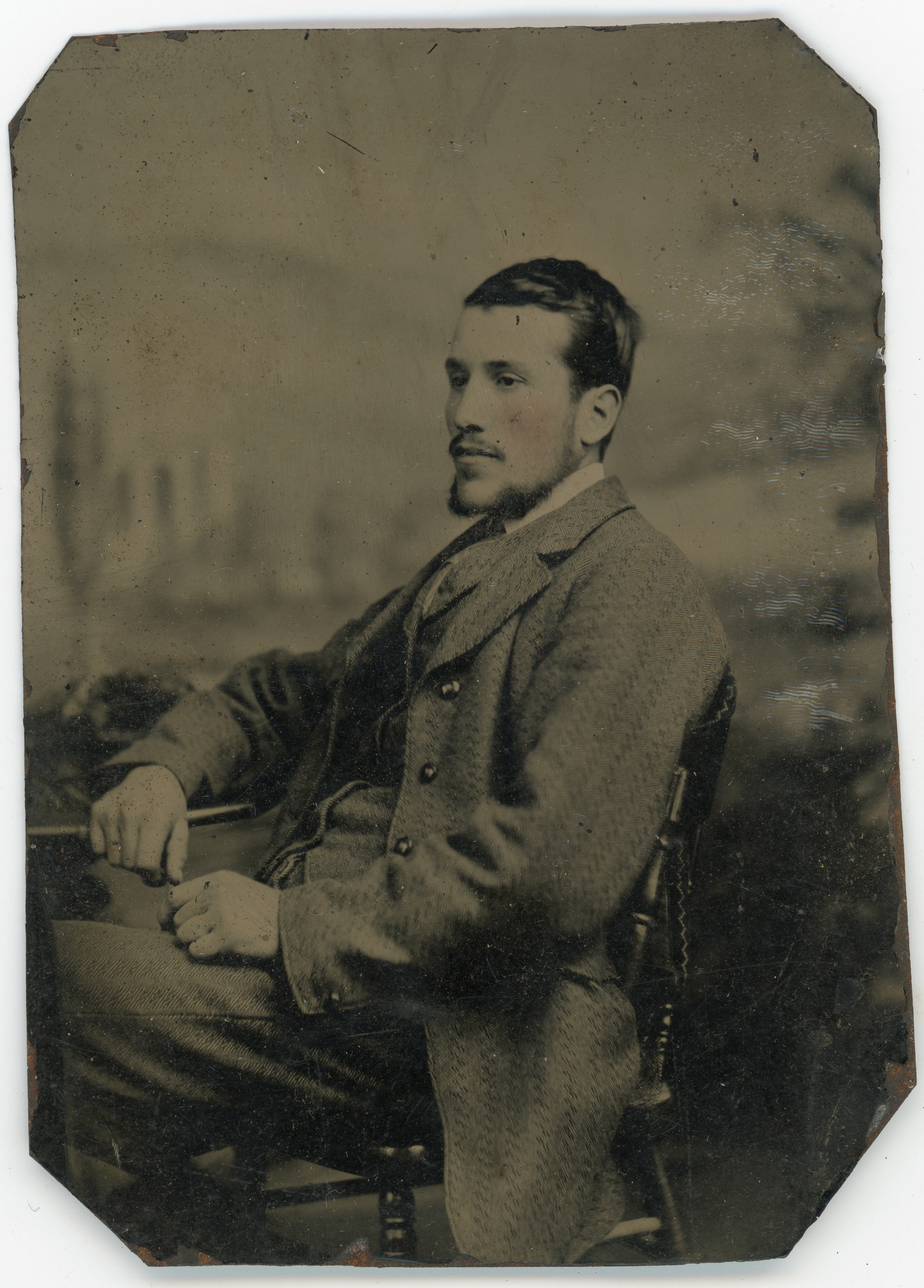 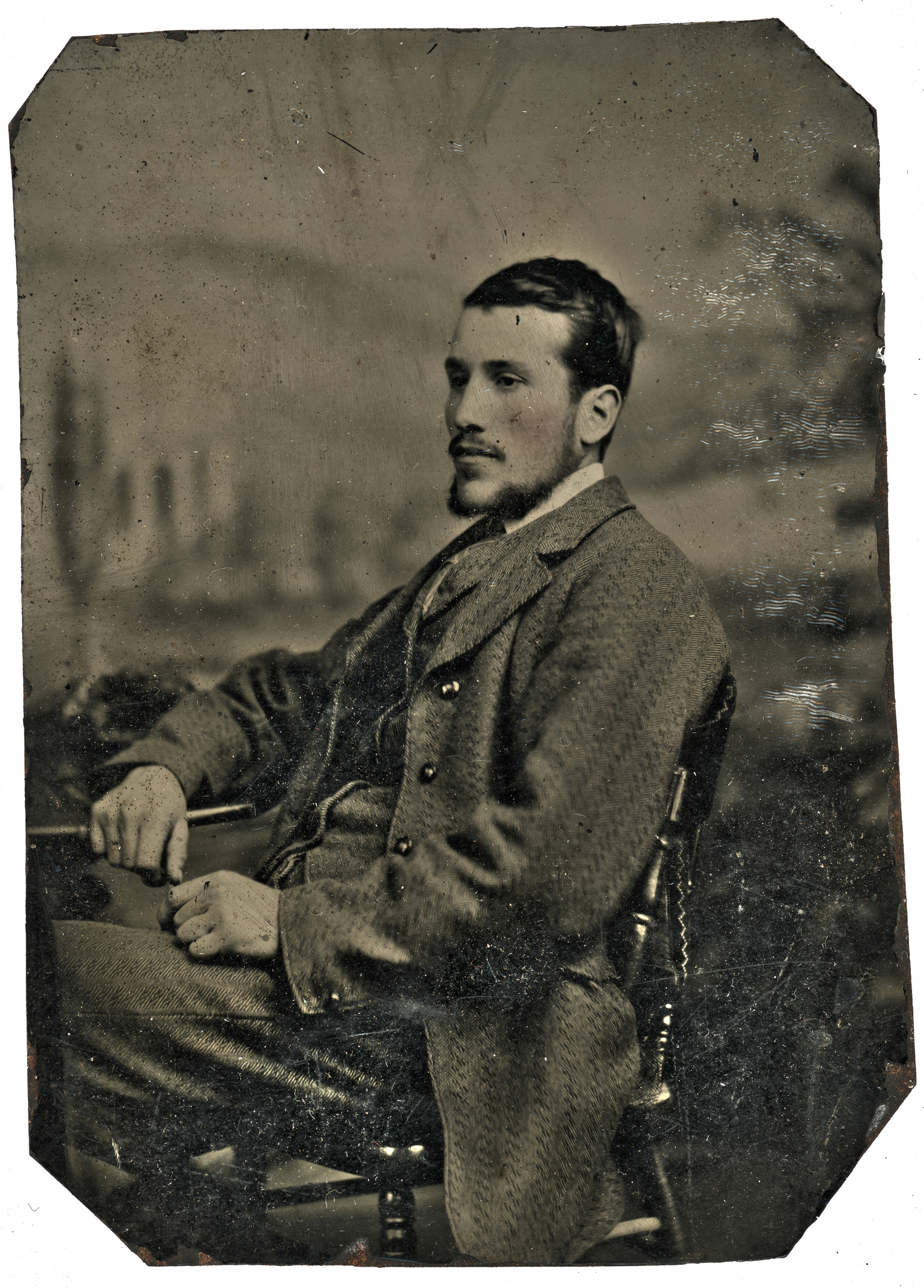 These examples of tintypes belong to the University of Newcastle archive, both the photographer and the subjects are unidentified. The photographs on the left side are the unedited digitised tintypes and are show the original photograph, while on the right are the images that have been edited using Adobe Photoshop to enhance the detail within the images. The stresses and the damage due to time are evident. 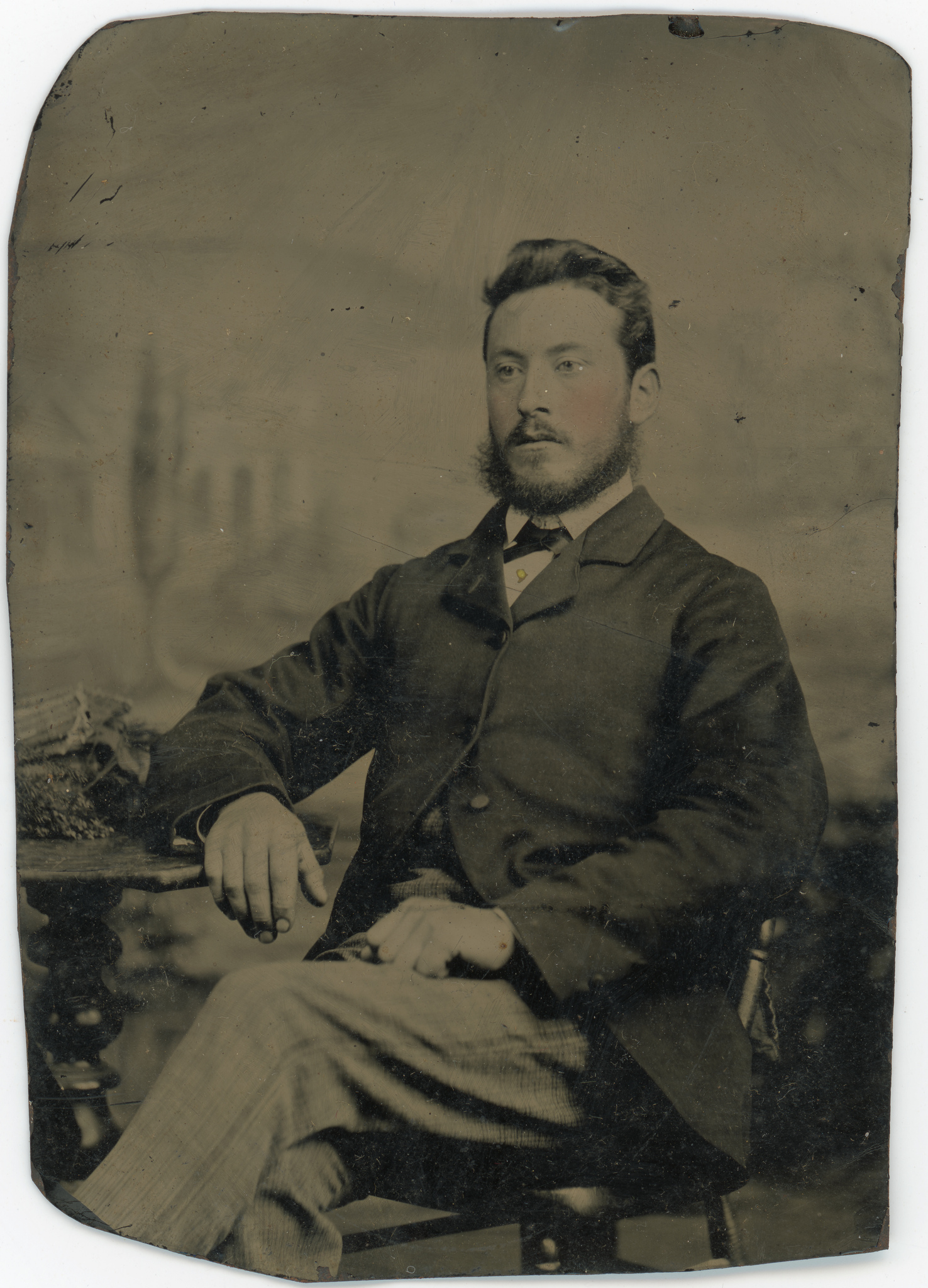 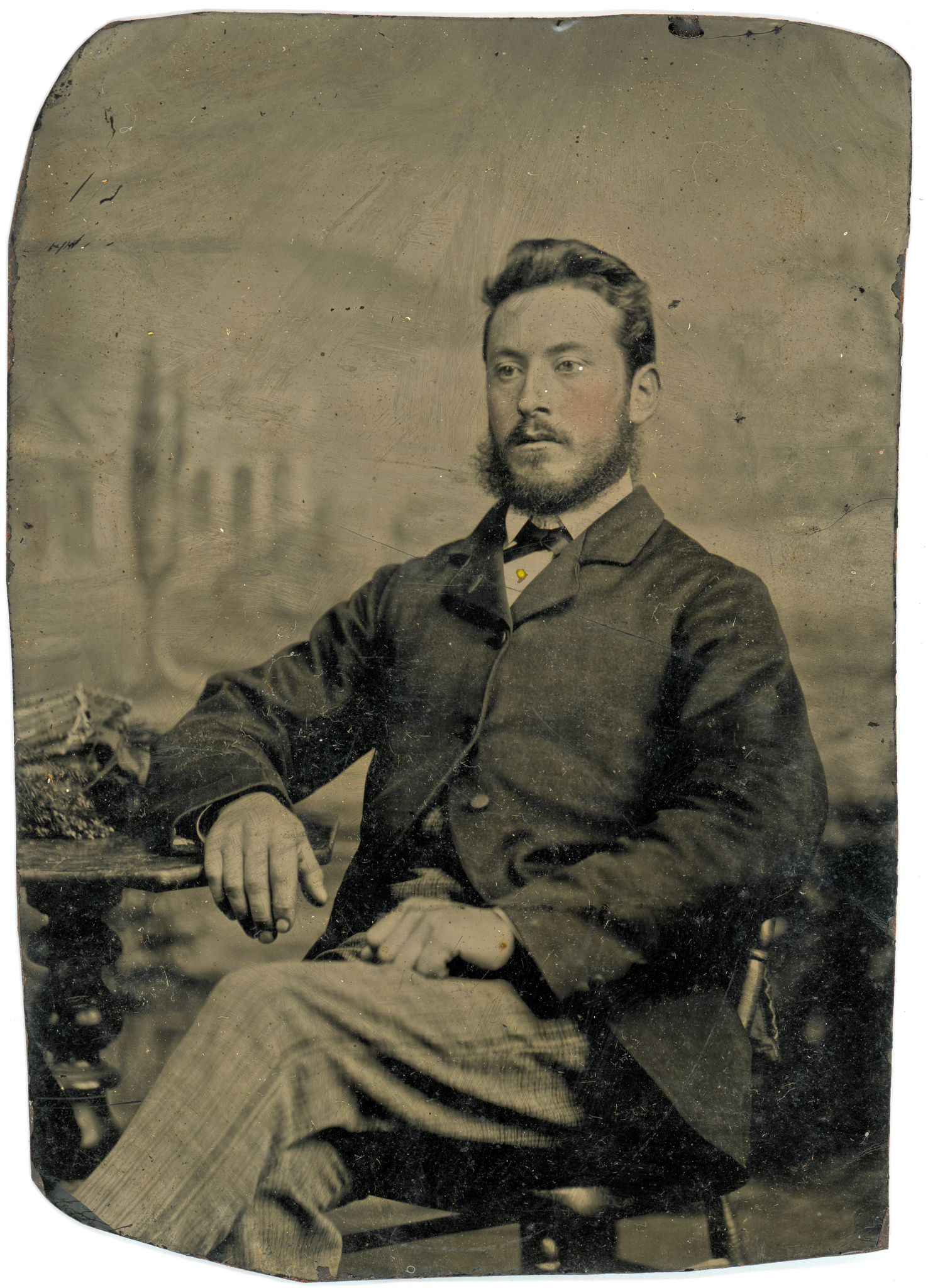 Tintype, also known as a melainotype or ferrotype is a form of photography predominantly used between the 1860s and 1870s, created using the wet collodion process. Collodion is a solution of nitrocellulose in ether and alcohol, which is applied to a thin metal sheet and then covered with silver nitrate. The plate is then loaded inside a particular camera in a dark room, after which it is ready for exposure. After the plate is exposed, while still wet, it is processed immediately. The resulting image is an underexposed negative coated with dark gloss. Once prepared, it would be mounted in either a case or placed inside a simple paper mat.

There is also a dry method, which uses gelatin emulsion in place of collodion. The plates must be prepared well ahead of time, as they need to be dry before usage. Whether using the wet or dry technique, the result remains the same.

Tintypes were initially developed in a formal photographic studio, but later they were commonly made by photographers working in booths at carnivals and fairs, and even used by traveling photographers, as it could be developed and fixed and handed to the customer in few minutes after the picture was taken. The tintypes were revolutionary in comparison to its predecessor; daguerreotype, which took thirty minutes to produce a photo.

The tintype was especially popular during the civil war in the U.S, used to document the horror and misery of the battle scenes. It was also used to capture scenes from the Wild West by traveling photographer since photos could be quickly developed in a covered wagon.
In mid-1860s tintypes started losing its dominance to the higher quality albumen prints, only to survive as a carnival novelty till next forty years.

Since than tintype has been resurrected by many contemporary photographers and artist as a form of art in itself, during the 2014, Sundance Film Festival, photographer Victoria Will captured intimate portraits of celebrities using the tintype photography, which became an online sensation. [Tintype photos of actors at the Sundance-Film festival]

Despite our advancement in creating hi-resolution cameras which fits in our pocket, our love for vintage and passé has advanced as well. Which has become a driving force behind the resurrection of these types of photography. There are various application and filters in our phones which has given the old-timey charm for tintype on our fingertips.

– Tenzin Legden holds a Bachelor of Arts from University of Newcastle, specialising in Philosophy/Religion and Psychology.

One thought on “Ancestor to the modern ‘Selfie’”