1882, 10 November. PRINCE OF WALES BIRTHDAY.
Newcastle Morning Herald and Miners’ Advocate
At an early hour yesterday morning, the prevalence of large numbers of holiday folk in gay apparel, the sound of brass bands, the display of bunting …”

1882, 23 June. THE BANQUET.
Newcastle Morning Herald and Miners’ Advocate
A banquet was afterwards held in commemoration of the event in the Protestant Hall, Newcastle, where about one hundred gentlemen sat down to a most r …”

1882, 15 December. Concert at the Victoria Theatre to aid funds for WICKHAM SCHOOL OF ARTS.
Newcastle Morning Herald and Miners’ Advocate
“YESTERDAY afternoon the ceremonies in connection with the formal opening of the School of Arts, Wickham, commenced at 5 o’clock. Shortly after that h …”

1882, 16 December. WICKHAM SCHOOL OF ARTS CONCERT.
Newcastle Morning Herald and Miners’ Advocate
“On Thursday evening a very excellent vocal and musical entertainment was given in the hall of the new School of Arts, Wickham, in honour, of the publ …”

1882, 21 December. BALL AT WICKHAM.
Newcastle Morning Herald and Miners’ Advocate
“THE opening ball in connection with the local School of Arts crime off on Monday night in the new building, and was in every sense a highly sociable …”

1897, 7 October. Wickham School of Arts. A BAZAAR AND INDUSTRIAL EXHIBITION. The Musical Competitions To-day.
Newcastle Morning Herald and Miners’ Advocate
“THE bazaar and industrial exhibition which the ladies of Wickham have worked hard to make a success, was opened yesterday afternoon in the hall . . . ”

1903, 24 June. STARR-BOWKETT SOCIETY.
Newcastle Morning Herald and Miners’ Advocate
“The first appropriation meeting in connection with the Star-Bowkett Society was held in the Wickham School of Arts on Saturday night last. A large nu … ”

1908, 2 April. A Mudgee Man’s Life Story Henry Lawson’s Early Days.
Mudgee Guardian and North-Western Representative
“Then the break of the drought and several good seasons. But we had rust in the wheat one season, and “Smut” the next. The “break up . . . ‘

1908, 15 August.  WICKHAM.
Newcastle Morning Herald and Miners’ Advocate
“The fourth of a series of Cinderella dances, promoted by Mrs. R. J. Bond and Misses Bearby and Ward (3), in aid of the Wickham School of Arts, was he … ”

1909,7 August. WICKHAM – SCHOOL OF ARTS.
Newcastle Morning Herald and Miners’ Advocate
“The annual meeting of members of the Wickham School of Arts was held last night in the reading room of the institution. Mr. R. J. Bond, president. to … ”

1909, 30 July.  WICKHAM.
Newcastle Morning Herald and Miners’ Advocate
The third of the season’s series of Cinderellas promoted by Mrs. R. J. Bond and the Misses Ward (2) and Bearby (2), was held in the Wickham School of …”

1915, 23 July.  Visit to Newcastle SteelWorks (Continued).
The Cessnock Eagle and South Maitland Recorder
“And as the sparks shower around us, what recollections of the Village Blacksmith, and of the school-children catching the burning sparks that . . . ”

1918, 2 August. WICKHAM WELCOME HOME
The Newcastle Sun
“At the Wickham School of Arts on Saturday a welcome home banquet and dance will be tendered seven returned soldiers by the Wickham and Linwood Soldie … ” [Henry Lawson’s Early Days; Hudson Brothers]

1921, 4 January. HERE AND THERE Hannell street
The Newcastle Sun (NSW : 1918 – 1954) Tuesday
“Four dolphins in front of the School of Arts, Wickham, are nearly completed, and would form a splendid place for ships with spare ballast to . . . ” [Concert by Sinclair’s Sparklers]

1922, 4 September. HENRY LAWSON. DEATH ANNOUNCED. Poet and Prose Writer.
The Sydney Morning Herald
“The death took place on Saturday morning of Mr. Henry Hertzberg Lawson. He was 55 years of age. His contributions to Australian literature, alike in … ” [Letter to the Editor from Reg Russom (of Fassifern), about knowing Henry Lawson and drawing his portrait]

1922, 2 October.  Henry Lawson’s Early Days. And His ” Ups and Downs ” of Life.(Reprinted from “The Lone Hand,” and taken from the “Guardian” file, April 2, 1908).
Mudgee Guardian and North-Western Representative
‘We had rust in the wheat one season, and “[?]mut” the next. The “break up of the drought” is as aggressively, resentfully, weirdly . . . ” [Death of Henry Lawson, mentioning his time in Newcastle]

1930, 23 September. WICKHAM ODDFELLOWS
The Newcastle Sun (NSW : 1918 – 1954) Tuesday
“The Wickham progressive branch of the G.U.O.O.F has won the shield given by the Grand Lodge for the lodge initiating the greatest number . . . ” [Free Library Movement]

1931,11 December. FREE VEGETABLES FOR DISTRESSED WICKHAM RELIEF
The Newcastle Sun
‘Wickham Relief Committee will hold its weekly distribution of vegetables at the Maitland-road depot, Islington, this afternoon.” [GUOOF meeting in School of Arts]

1931, 18 April.  MAY DAY FETE To Help Wickham’s Poor ALL BODIES HELPING
The Newcastle Sun
“The May Day celebrations in the Newcastle district, which will take place in Islington Park on Monday. May 4. is expected to be large. . .”

1931, 6 June. GIRL CRICKETERS
The Newcastle Sun
“The Sydney Cypress girls’ cricket team arrived in Newcastle to-day to play the Adamstown Rosebuds on the Newcastle Sports Ground No. 2 . . .” [Four mooring dolphins being erected in front of the School of Arts.]

1931, 18 April.  NEED FOR CLOTHING Wickham’s Appeal 160 PARCELS LAST WEEK
The Newcastle Sun
“Readers of “The Newcastle Sun,” assisted by Newcastle Motor ‘Bus Owners, have responded nobly to our appeal, and during the past week we . . . ” [Newcastle Girl Cricketers fundraising dance]

1931, 25 July. PIONEER MEMORIES -Had to Work Hard-MRS. C. NEWLING AT 96
“About where the goods sheds are at Honeysuckle Point,” Mrs. Newling explained, ‘”there used to be a pound. There horses and cattle, and even pigs, running lose about the streets, were put in. Where the bank is at the corner of Hannell-street, and along as far as the Wickham School of Arts, there used to be small slab cottages; and where the Wickham Public School stands, there was a slaughteryard, with a drain through into the railway cutting. Where the Brewery is, and also the Catholic Church, was thick scrub”. . . . At the spot where the wool sheds are now at Wickham, the tidal-waters of the harbour used to come up; and it was the same at Honeysuckle Station. There were no means of getting to Bullock Island except by rowing boat. Years afterwards, when the cranes were erected, a bridge was built from Newcastle to the island,and this was removed later as the harbour works were extended westward. There was an aborigines’ camp at Wickham, on the site of Goninan’s workshops. . . ” 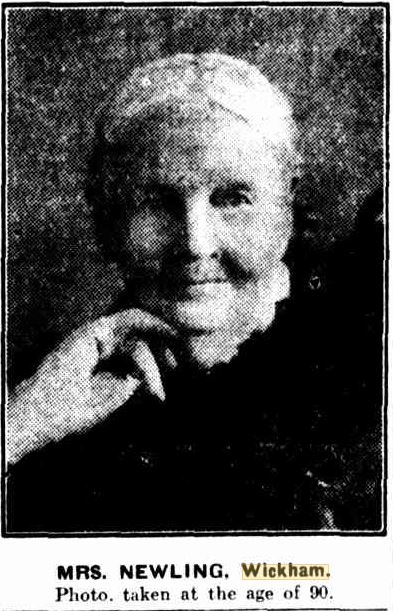 1933, 12 December.  FOOD RELIEF ISSUE WICKHAM FAMILIES TO SHARE CHRISTMAS FARE
The Newcastle Sun
“About 600 destitute families in the Wickham municipality will share in the Government’s Christmas food relict issue as a result of . . . ” [Concert to raise funds for Wickham’s 550 destitute families (due to Depression?)]

1933, 12 December, Food Relief Issue – Wickham Families to Share. Newcastle Sun (NSW : 1918 – 1954)
“About 600 destitute families in the Wickham municipality will share-in the Government’s Christmas food relief issue as a result of a meeting of local charitable organisations and relief committees held in the Council Chambers last night. In accordance with the terms of the relief issue, the’ Mayor of Wickham (Alderman Grahame) convened the meeting to secure particulars of the number of families eligible for relief, and to arrange details of the distribution.  A distribution committee was formed, consisting, of representatives of the Mayor’s Relief Committee, the Wickham Unemployed Relief Committee, St. Vincent do Paul organisation, Wickham Church of England, and the Tighe’s Hill Salvation Army. The Mayor was elected president, and Alderman Davies secretary. The food relief, which will consist of honey, vegetables, eggs and the like, will arrive on Wednesday, and will be distributed at the School of Arts, Wickham, on Thursday and Friday. All families to participate in the distribution will be required to register with tho committee, and will receive n card to be presented on the day of the issue.” [This article is about destitute families in Wickham in 1933. A tragic episode, however shows the additional use for the School of Arts in its broad social context.]

1947, 31 March. Funds Sought For Henry Lawson Labor College
The Newcastle Sun
“Newcastle Federal Electorate Council of the A.L.P. is to seek a substantial donation from the May Day Committee to assist . . . ”

1947, 31 May.  BOOK REVIEWS The Best Of Henry Lawson
The Newcastle Sun
“COLIN RODERICK reminds us in “Henry Lawson” that the most truly representative Australian writer” once sojourned in Newcastle. . . .” [Mentions Lawson’s work at Hudson Brothers and quotes a poem about that workplace]

1949, 3 August
FREE LIBRARY MOVEMENT CENTRE AT WICKHAM
The Newcastle Sun
‘Headquarters of Newcastle Council’s Free Library Movement will be transferred to the former Wickham School of Arts in Hannell-st. as soon as the coun … ” [Wickham and Linwood Soldiers Presentation and Welcome Home Committee. 244 medals given ]

Henry Lawson and the Wickham School of Arts By Ross Edmonds

Photographic Panoramas of Wickham, N.S.W. (circa 1890) and