The photographs below were provided by a number of sources. The first being Brian Laut who, along with his colleague Jim Mitchell, visited and photographed a network of caves located in Pokolbin State Forest area in the Hunter Region, N.S.W. at various occasions during 2015 and 2018.

On the 29 May 2018 Brian Laut escorted a team of investigators from the University of Newcastle, as well as local land owners to visit two of the caves. The caves were noted for their hand stencils and series of vertical lines. Professor John Fryer and Dr Ann Hardy recorded photographs of the sites visited. Professor Fryer’s images were combined to create 3D montages below. He states, regarding to the creation of the 3D montages below (in an email 2 November 2018):

“New photogrammetric software can do automatically in 5 minutes (perhaps 10 max) what it took a skilled operator at least a week to do in circa 2003/4 when I had such a skilled person at the uni for 3 months from the UK, i.e. make a 3-D model which can be interrogated at leisure and is dimensionally precise (enough). See: Baiame cave 3D from 2004

For small (under 50) sets of overlapping photographs, some of the software is free and the results are great.  I used ‘3DF Zephyr Free’, with no instructions and flying-by-the-seat-of-my-pants method this year when we visited a cave with Brian Laut.  Attached are a couple of ‘snap-shots’ from the 3-D model it generated.  Please regard these as really amateurish and low resolution as it was my first quick attempt after I downloaded the program.  I had a few other attempts of making 3-D models of rock painting sites after Margaret and I visited Carnarvon Gorge in June and the results were very satisfying.  Imagine what a young person (who could text on a phone) could do with the power of this software!!

So, a few minutes spent talking about where to take the photos from and how many (and my phone camera does really well due to the great spectral range of its imaging array, no expensive lenses needed any more) could make a big difference to the overall recording result.  The jury is still out about the recording of rock engravings though.” 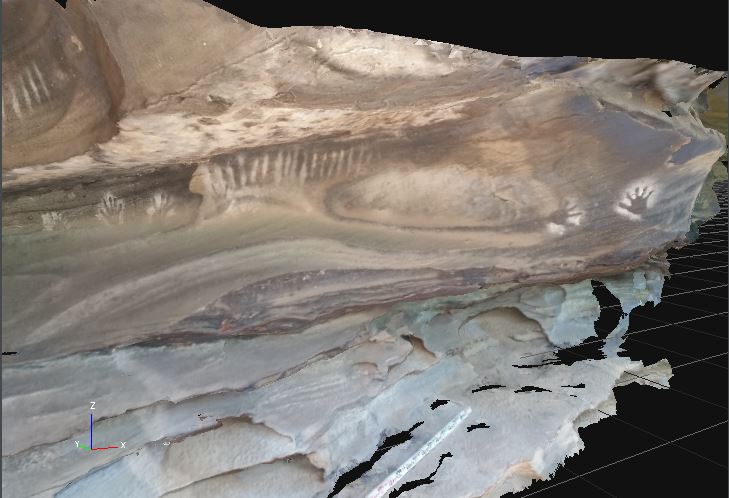 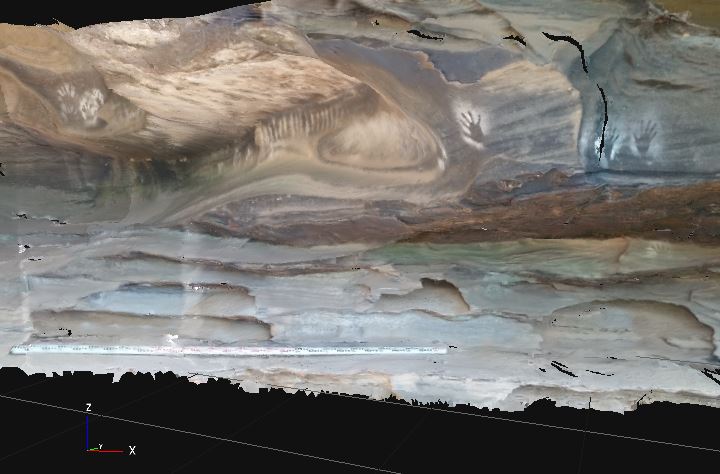 The method of the cave painting’s creation, and what they represent has been unclear, and so is open to further ongoing discussion and research.

The vertical lines indicate that they have been created using an actual digging stick as a stencil, but we are not certain.

Uncle Warren Taggart, Aboriginal Elder of the Wonnarua people, tells us (by phone call received 26 November 2018) that his father, Stanley “Tommy” Taggart, told him that they were “the people that were there.” So they may have been a kind of census.

The photographs below are arranged in a series of galleries:

A2018 (B) Photographs by Jim Mitchell

“Accessing an area adjacent to where I took you last time (i.e., 29 May 2018). Cave after cave has just stripes and more stripes – one such cave has 170 stripes painted in it. The concentration of such stripes in a relative small mountain area must have some significance? The reason is beyond me – (Central consensus archives for a population count perhaps?) Regards, B.”

In the video above Professor Fryer mentions a similarity of the figures in these caves, with those he visited in the Grampians in 2005. In an email (27 November 2018) he says:

“I visited the Grampians in 2005. Attached are a couple of my photos from the Billimina Cave. I believe a sign said there were 2,500 vertical stripes. One theory was no. of initiations, but who knows?”

“Found these group of paintings in Pokolbin State forest area – at the bottom of a deep gully – out of the ordinary. Most sandstone cave systems are found along exposed ridge lines where weathering can take place – also these paintings are done on conglomerate rock surfaces.”

If you would like share further information on these sites, or the images, please leave a comment below, or contact the UONCC GLAMx Historic Sites Documentation Team at the University of Newcastle, N.S.W. (Australia) archives@newcastle.edu.au