The following is a general overview of an on-line survey investigating people’s perceptions of Newcastle’s history. The project was undertaken by UON Cultural Collections team and co-ordinated by UON student Brendan Josevski in the GLAMx Lab as part of an 80-hr social science placement.

A simple 14 question survey was formulated and conducted asking the general public about their thoughts, opinions, attitudes about Newcastle’s history. The purpose of the survey was to get a better understanding on what people know about  local history and what they think is important about Newcastle’s knowledge, also placing it in the Australian historical context.

The survey results have been analysed and made into graphs to show a visual representation of what participants said and how many answered the questions. The survey was sent out via social media and was on shared by individual users, it was also sent out to local Facebook groups in the Newcastle and hunter region (group that weren’t associated with ‘history’ but were generally ‘community’ focused). The survey was open for 3 weeks and over 230 people participated in the survey.

The report can be used as a basis for future surveys and research about attitudes in relation to history and culture in Newcastle. Due to time constraints the survey answers were not able to be extensively interpreted and findings fully documented.  What the report covers is a brief response to the answers that further research can expand on.

Newcastle has a significant layered history associated with the place, and includes themes such as the environment and its people. A high number of those responding to the survey stated that when traveling overseas they visited historic places of interest (see Q12). Some of the respondents were unfamiliar with Newcastle and the region’s history, others had no interest in history at all, perhaps having not been exposed to knowledge about history via sources or educational settings. Others had significant knowledge of the local history of the area.

Below are some graphs and summaries of the research report showing responses of the 230 participants of the survey: 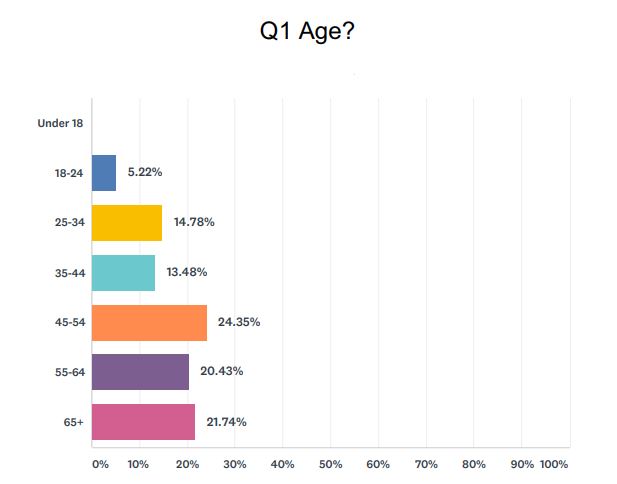 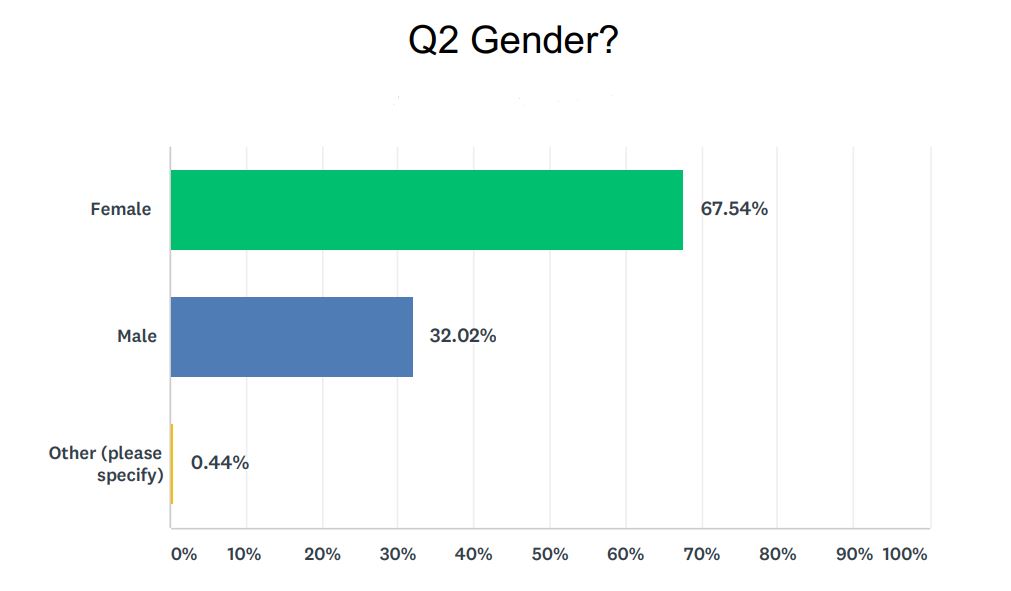 Most of the individuals that participated in this survey were female (67.54)% as seen in  Q2 results above. This is an interesting result because anecdotally many males are interested in Newcastle’s history, with the particularly strong focus on industrial heritage, with many groups having male members in these groups.  This result requires further evaluation as there may be other reasons as to why men were less likely to participate in the survey, for example their level of competency using online platforms. Due to time constraints this could not be explored further. 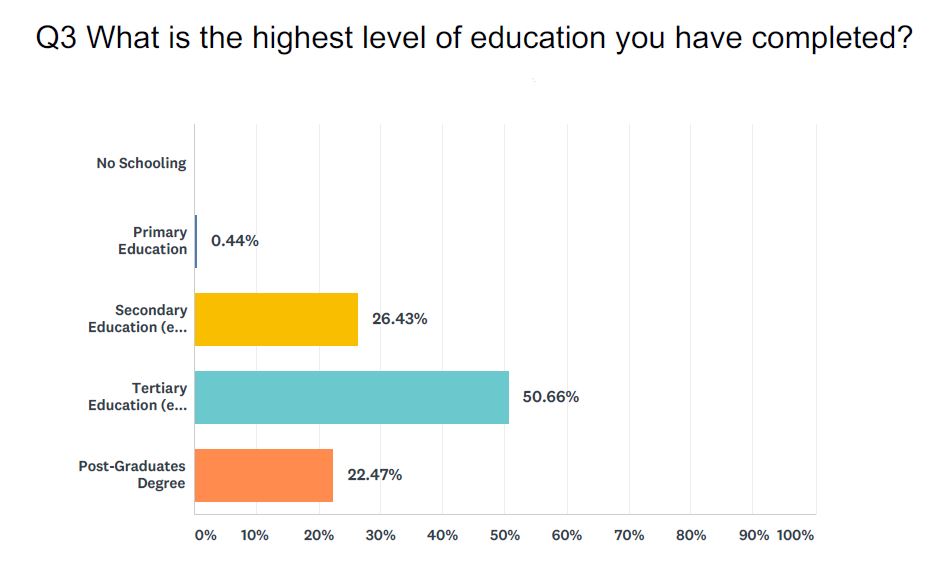 A participant’s level of Education was categorised in 5 groups, including, ‘No Schooling’, ‘Primary’, ‘Secondary (School Cert/HSC)’, ‘Tertiary (TAFE/Bachelors Degree)’ and ‘Post-Graduates Degree’. Because of the simplicity of the survey the results were not able to analyse who answered particular questions.  A question that requires further analysis is ‘Does education play a role in a persons knowledge/interest in local history?’ Another question that could be further explored is which gender is most likely to progress in further in education, and at what age a person attained their highest qualification.

As mentioned Q12 asked respondent’s whether they experienced history of other countries when they visited overseas.

Many of the respondents stated that when visiting overseas they were likely to visit significant and important sites.  This could include an interest in architecture/design of buildings or visiting historical sites reflecting various ages and the country’s general history. However we find some respondents stated ‘No’ to Q12, this may be due to their purpose for travelling (i.e. attending conference/work related/visiting family/visited location before).  It may be that individuals do have an interest in history, but their purpose for travelling doesn’t permit leisure time. Other factors such as age, no interest in history, could also be a reason for not visiting historic sites.

These questions relating to demographics are important for future surveys to measure and compare whether there are significant changes in perceptions associated with history among the various age groups. Further study could look at individual respondent’s questions in more detail to establish qualitative data. As well as look at other questions in the survey, alongside individual demographic data to formulate more detailed responses about an individuals opinions about Newcastle’s history. As shown in Q9 below a very high portion (80.73%) of respondents agreed that Newcastle’s history is important and there were further questions that allowed respondents to comment on what specific areas of the city’s history they thought were important. 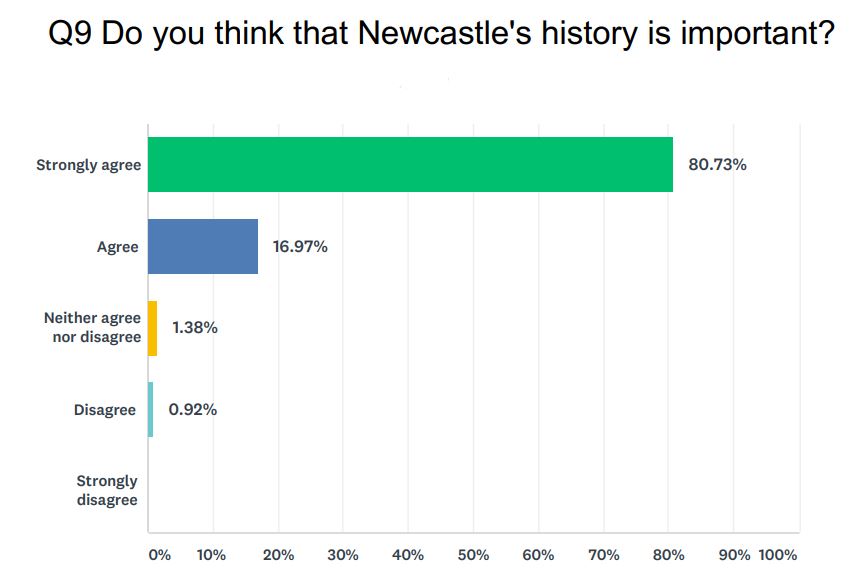 Although questions Q9 and Q10 are similar in terms that they are about ‘history’, each provide insight and authentic responses about Newcastle’s history. Most respondents agreed that Newcastle history is important and plays a significant role in the nation’s history. If participants answered ‘yes’ they were given an opportunity to comment further on what aspects of history they thought were significant to them.

The general consensus was that most people thought Newcastle did have national significance in terms of its history. Many stated that Newcastle was one of the earliest European settlements in Australia, convicts sent to the penal settlement there during the early 1800s.  Newcastle was a  place of secondary punishment and a prime location to build the economy through it natural resources. Its coastal and Hunter River location was ideal for transportation and the export of natural resources such as coal and other produce.

Some participants commented on the local Indigenous history and heritage, and how Indigenous culture was important sitting alongside European history.  Also acknowledged was the conflict between Indigenous communities and settlers and how the different cultures needed to co-exist in a single society.

The majority of participants agreed that there should be some level of public funding supporting history/heritage in the form tax incentives, donations, government funding etc. If respondents answered ‘yes’ to Q13 they were given the opportunity to comment further. Further comments provided a better understanding of the participant’s perceptions towards Newcastle’s history and heritage. Generally participant’s answers related to physical tangible places that still exist, such as buildings and other landmarks in the built environment.  Others noted the intangible histories such as stories relating to individual’s and families, or Indigenous stories that are not generally well known or documented.

Here are some of the respondent’s comments relating to Q13.

“Newcastle has such a precious heritage…such sites, buildings, people, which we need to conserve (not the people of course but they need to be listened to and written about) Some of these people who have given so much to this community, indigenous and others as well need to be heard and recorded before it’s too late.”

“Governments represent, in a sense, Australian history. If history is to be preserved, and promoted, in Australia funding will not come from private sources. The people (generally speaking) are interested in history, and Governments are, or at least are supposed to be, Representatives of the people.”

“Newcastle has too few early structures that evidence Newcastle’s origins. Those that survive must be preserved as markers in time. I believe if the roots of our history are not understood, and shown in relief, then we have no history. The story of Newcastle is not well told. What buildings and lands that exist should be preserved as our heritage, and winning support through government funding and public donations should be a priority.”

“It is absolutely imperative that public funding be used to preserve the history, cultural and material heritage of Newcastle and elsewhere because it is a very deep but easily destroyed treasure in terms of Aboriginal heritage with a thin and seemingly ephemeral veneer of European heritage. Without public funding we will find it increasingly easy to clear away, particularly material culture, because it can seem an impediment to progress. Although it has been suggested in the past, it may be time to investigate heritage lotteries as they have in the UK.”

“Definitely – I love the French notion of “patrimony”, the idea of culture, place and history being significant to a nation’s people, and I strongly think our government should fund preserving and promoting heritage.”

At the end of the survey the question “Is there anything else that you think is important history or heritage about Newcastle?” was posed as an optional question if participants felt that they had further comments to make.  Generally most participants mentioned specific and well known places of interest such as the former Newcastle Court House, Fort Scratchley, the Convict Lumberyard, the Bogey Hole (Commandant’s baths), Royal Newcastle Hospital, former Newcastle Post Office just to name a few. Others mentioned events like the Star Hotel riot in 1979, and the earthquake that struck the city in 1989. There was a general consensus that preservation of Newcastle’s heritage and other histories (oral histories and stories) were important.

The following comment demonstrates the overall concern about others not caring about Newcastle’s history :

“I am at times distressed with the number of people who care or know little about it. I am not against progress but too many people condemn those who seek to retain many of our historical edifices. Many fine pieces of historical architecture are being condemned, only to be replaced by monotonous boxes with glass. How soon before the post office and all those old buildings in the city region are pushed from our memories. Ask young people of Newcastle’s history and they either don’t know or don’t care. I might suggest that many who argue against history and push for progress, would not hesitate to travel the world to see places whose history has lasted for hundreds, if not thousands, of years.”

In general the findings show that participants agreed that Newcastle’s history is  significant.  Specific histories have shaped the identity of Newcastle, which has a much larger story in also shaping Australia’s national identity. Findings also show that older respondents were more likely to participate in answering survey questions about history than younger people. This may illustrate that younger people are less likely to engage or be interested in sources relating to the history of Newcastle, and therefore may not fully understand the city’s significance as compared to those in the older age groups. As mentioned previously the reason more females then males participated in the on-line survey needs further investigation – and perhaps whether female education associated with the humanities (history) could be a factor. As mentioned the survey findings have been quite general in comparison to a full in-depth study, and is only a snapshot of opinions, thoughts and attitudes in 2018.

Many thanks to those who participated in the on-line survey.

3 thoughts on “Survey Report – Do You Think Newcastle’s History is Significant?”