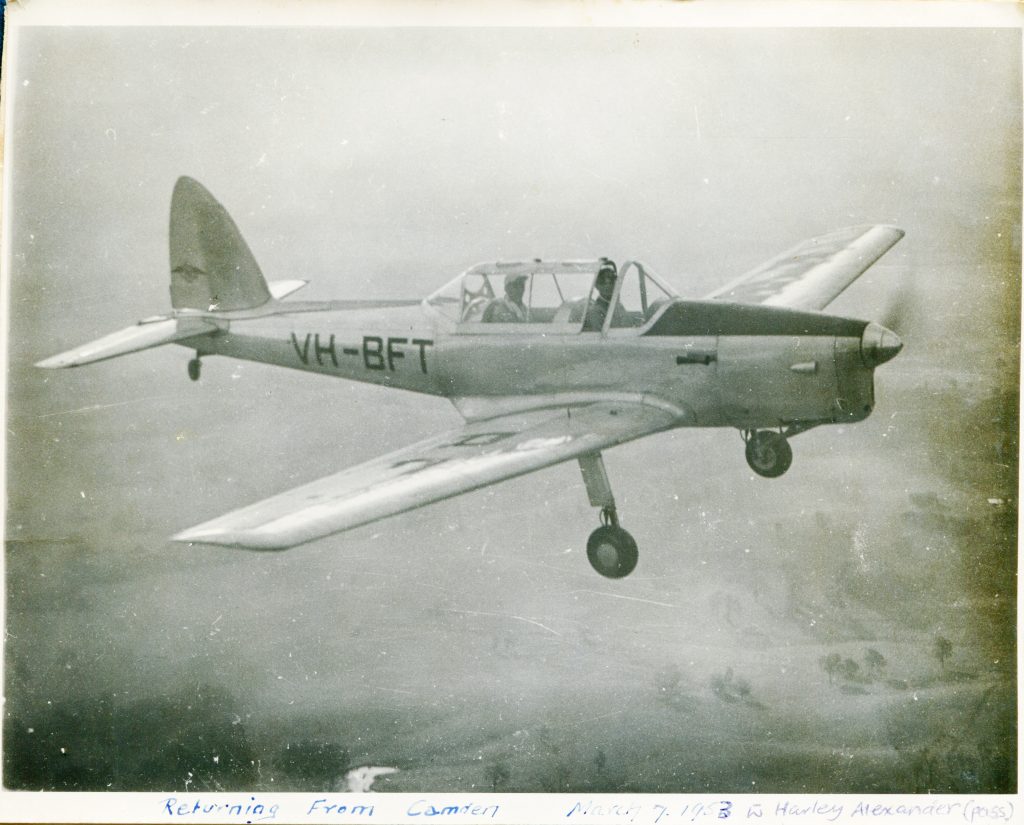 A digital copy of an 8mm film shot of the Maitland Floods from the air has been donated to the Archives of the University of Newcastle’s Cultural Collections in the Auchmuty Library.

The archival film was shot by the late JEFFREY ALLEN BURNS (1929-2013) in February 1955, and was donated by his daughter, Jenna Reed Burns. She also provided us with a digital copy of another 8mm film shot around the Newcastle Aero Club as well as scans from her father’s Newcastle Aero Club Flying Log Book relating to the the period from 1951-1955, which includes entries relating to the Maitland Floods.

We thank Jenna Reed Burns for allowing the University to share this archival material with the wider community, as well as providing the following detail (metadata) relating to the material provided below.

The 8mm Digitised Films
The digitised 8mm films were digitised professionally by DVD Infinity in Sydney, with each film scanned scanned frame by frame and enhanced to remove blemishes. The resulting digital films were saved as standard definition .mov files (H264) format.

The contents of the two digitised films are as follows:

Footage of the flooded region of Maitland. Jeffrey Allen Burns’ log book indicates that this footage was likely to have been shot on the 26 February 1955 when he flew an Auster, Registration KSC, over Maitland with a second pilot or pupil, S. Freedman, with the purpose (or duty) of the flight being noted as ‘Maitland photographic’. His log book also notes that he also flew a Tiger Moth on 27th and 28th February, and again on the 1st March, to do ‘food drops’, presumably over the flooded area.

The film includes formation flying in Tiger Moths (footage taken from one of the planes); a seaplane taking off (possibly from Lake Macquarie?); a parachutist jumping from two Tiger Moths; and Tiger Moths doing aerobatic manoeuvres (shot from the ground). 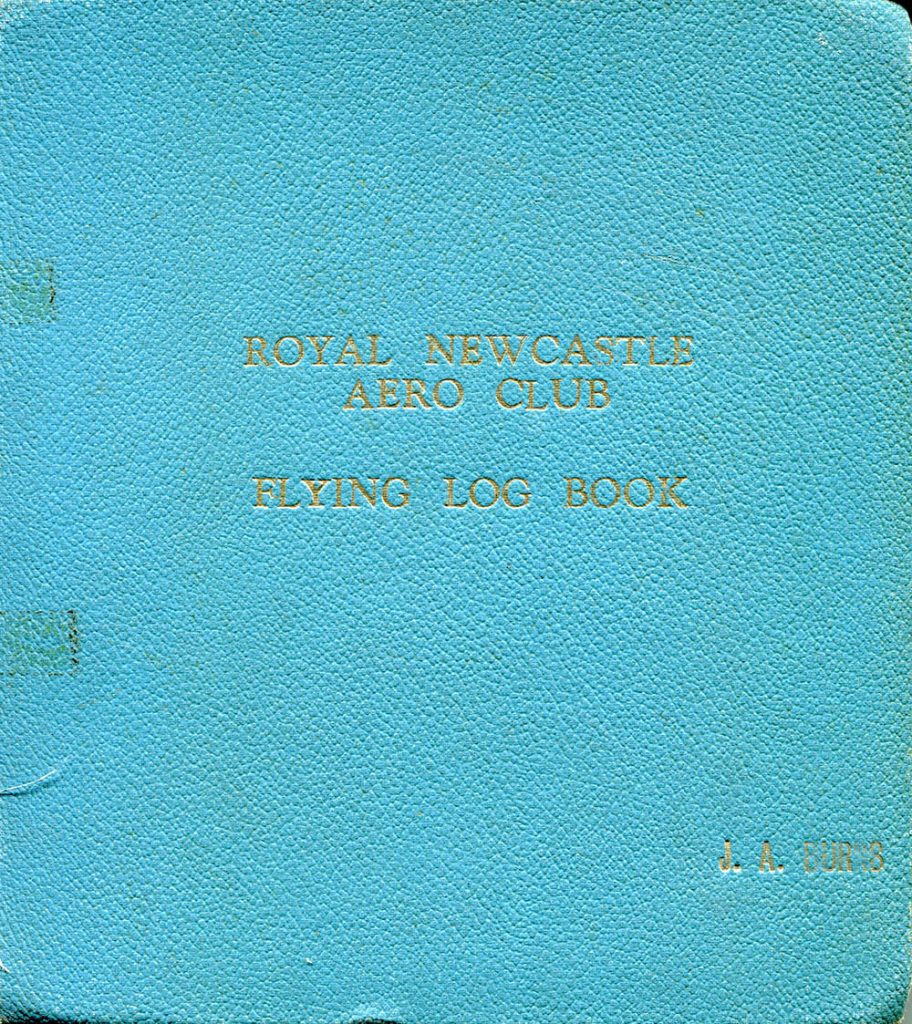 Jeffrey Allen Burns’ Royal Newcastle Aero Club Flying Log Book has been scanned by Jenna Reed Burns at 24-bit colour, 400 dpi and saved as tif uncompressed files, as we requested. We then converted them to jpg and compiled them into a PDF file for ease of access. We have saved them in PDF and PDF reduced size format.

He worked selling tractors, cars and white goods, and then began learning to fly at the Royal Newcastle Aero Club in Broadmeadow. He commenced his training there in July 1951 and competed in aerobatic competitions for the club.

“Regarding the photos of ‘Judith’, I gather her name was Judith McCormack and she and my father dated for a year or so. The logbook entries show that she also accompanied him on many of his flying jaunts.” (Jenna Reed Burns)

“In September 1955 Jeffrey was accepted into commercial pilot training by Australian National Airways (ANA), and moved to Melbourne. It was Harley Alexander who encouraged him to apply for a job as an airline pilot with ANA, so he was instrumental in my father’s career. The two of them, Harley and my father, also registered a real estate agency at one point but I don’t think they had any listings or sold any houses. Harley (a qualified architect) did, however, design the house that my father’s parents lived in for many years in Highfield, just near Harley’s home in Adamstown Heights. It is still standing.” (Jenna Reed Burns)

“Jeffrey and my mother (Rosemary Goninan, also from Newcastle) left Australia at the end of 1957 when he joined Malayan Airways.” (Jenna Reed Burns)

“Eighteen months later he became the main pilot (of two) for the Straits Times Press, flying the printing plates (matrices) from Singapore to Kuala Lumpur every night.” (Jenna Reed Burns)

“Sadly the company sold its plane in August 1960 and my parents had no option but to return to Australia, which is when my father joined Ansett ANA (as it was then known). After a year in Brisbane they finally settled in Melbourne in 1961 and he remained with Ansett Airlines until his eventual retirement in the 1990s.” (Jenna Reed Burns)

My logbook shows Jeff & I flew up over Wallarobba airstrip near Dungog on March 2nd 1952, ( nothing on March 1), took 55 minutes but did not land; we saw Gordon Greig’s Auster VH-PAB on strip with Morrie Whittington, the pilot.

Jeff, Judith Mc Cormack and I, with Jeffrey piloting, left Broadmeadow aerodrome early in the day, flew to Tomago strip, Raymond Terrace, Muswellbrook & Scone to do joy flights at a flying display day, but were stranded there when a pilot, Bob Bird busted part of the undercarriage shock absorbers called a ” bungee”. We stayed overnight at the Golden Fleece hotel and were entertained by Father Newton ( an aero club pilot) and nurses he had conjured up from the local hospital. After new parts were flown up from Newcastle the following day, 7th by John Roberts an instructor, with Noel Lewis, in a Chipmunk, we returned to Broadmeadow at 4.20 pm. John Roberts later became an ANA. pilot and spent a lifetime based in Melbourne. I drew plans for John’s home down there.

My trip with Jeff was from Tomago airstrip ( now forested), where my wife dropped me by car, but I don’t know how I got home, probably Joyce picked me up as it was probably at the week end.We lived in Raymond Terrace at the time, so, according to my log- book, I arranged for Jeff to pick me up on his way to Maitland.

24th July 1955 JB certainly was spending all his hard-earned to get his hours up and was great at aerobatics as evidenced by the club’s win at Camden. The narrator, Don Huxley, spent much time as an instructor at RNAC.

Johnny Roberts learned to fly and became an instructor I believe at Broadmeadow. I flew with him on numerous occasions, once putting the wind up him when he was a passenger in a DH-84 Dragon and I was just out of conversion– I took off and went between the coal loader tower and Goninans. He deplaned promptly after that circuit and went and had a stiff drink I think– my remaining passengers stayed with me. ( perhaps they were so scared stiff they could not move!)Anyhow, according to my log book, on May 31st 1953 it is noted (1) I crashed my car going home at night into the rear of a stationary milk truck without lights in the middle of the Pacific highway at  Heatherbrae, south of Raymond Terrace. The car was a write-off and I won the case in court with an understanding judge — the bugger had left the truck there all day without even a battery in it. The farmer who came over to the car expecting to see a de-captivated corpse, said  ” I just knew this would happen”. I just ducked in time before I went under the back taking off the front top roof of the Jowett Javelin back to the rear compartment.

On the same page I note (2) that Johnny Roberts crashed his Tiger Moth into Hexham swamp and walked away from it. He was I think doing practice forced landings in a realistic manner. That sort of makes us equal again eh ?
The same Dragon VH-AOL involved crashed in flames at Orange, with Jim Hazelton as pilot ( friend of Jeffrey),  but all passengers walked away on May 10th 1953. Jimmy Hazelton of the famous Orange aviation/ crop- dusting group, learned to fly at the aero club and boarded with Jeff’s parents at Mayfield whilst learning. I met him on several occasions when I called on the Burns family.

It seemed a good idea at the time to put it back on the ground. The restored aircraft kept by the pilot-owner’s son ( who does not fly) has been holding on to the kite in memory of his late dad & my son Mark has tracked it down to a barn situated on a farm west of Bellingen NSW .There are a couple of pilots, he says, who have been pleading with him to sell. The article, covering this brouhaha in the Newcastle Herald, I have sent to you but I could not get the Herald’s accompanying photographs ( because I am not sufficiently computer-savvy)

Four of us bought the Stinson from a Dr Holmes of Inverell ( no relation to the famous detective) who used it for visiting neighbouring towns for professional purposes. With myself, other part- owners were John Charker, (Newcastle Photographics) Jack Herrald, Carl Dransfield ( who later became a Jumbo 747 Qantas skipper), I think Carl still survives, in Gymea, Sydney.

This page was compiled by Gionni Di Gravio in October 2018 from a variety of digitised materials and email correspondence from Jenna Reed Burns.