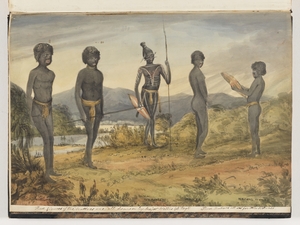 John Brown was a servant to the Scott Family during the 1820s in NSW. He kept a diary whilst in the Colony of his journey from Sydney, west towards Bathurst and to the Hunter Valley in 1824.  The diary is held at the State Library of NSW and has some interesting information about Aboriginal culture and the relationship between Aboriginal and non-Aboriginal people during the early colonial period.

John Brown’s Diary has also been transcribed by the State Library of NSW.

Brown was a servant to Dr Helenus Scott who died in 1821 on way to NSW.  Whilst in NSW Brown traveled with Robert Scott, and was servant to the family when they settled at Glendon homestead in the Hunter Valley.

Brown traveled from Sydney towards Bathurst with Bungaree and Carawoolgal (a Native Black Man and Woman) (p 20). On another journey the team were guided by an Aboriginal boy named ‘Ben Davis’ who seemed very skilled in bushcraft, speaking the native language as well as in English to negotiate safe passage (p 56).

We set of with Ben Davis as a guide and he seemed very much pleased, and kept talking all the way he went but we did not understand him but by what we could make out he was telling us about the country

The following are some excerpts from the diary.

Use of opossum fat by Bungaree to use on his skin,and about hair adornment.

eat them all but the fat, which he kept to rub on his face and Arms to make them shine sometimes he would paint himself all over Red and White streaks, with a kind Ocre they find by the side of the Rivers. they always Wear a long Read through their Nose for they have all a hole made when they are young in the middle part of the Nose their Hair which is very long is turned back and bound around till it sticks up in a Peak. (p 27)

Journey to the Coal River on the Eclipse a small Government Vessel. On this journey Brown described Jingleham, former Chief of Woolloomoloo.

In the morning we left the Bay but the wind still against us, we beat about until about four O’Clock in the afternoon, and then the Sea Breese set in which carried us into Port Stevens, as soon as the Native saw the Vessel a great number of Canoes came alongside with fish which they sold for Biscuits, in one of the Canoes was a very old man, that could talk a little English and he told us that he used to be at Sydney, but he had done something there and the Governor had threatened to have him flogged if he ever saw him in Sydney again and he had never been since which must have been near twenty years, for he had a Brass plate with a chain hung round his Neck, and on it was engraved Jingleham, Chief of the Native Tribe of Wooloomolloo given to him by Governor Philips. (p 49)

We stayed in Port Stevens two days as the Wind was against us, the Natives supplied us with plenty of fish and Oysters, and they tried to get out of Jingleham the reason he left Sydney and why he did not go there now but he would not tell them anything about it and when they put any questions to him about it he always turned it on to something else, he looked to be very old and is Hair was quite Grey and all the rest of them seemed very kind to him for if they had anything they always offered him part of it. (p 50)

About Brown’s stay at Coal River, after running away from Glendon in the Hunter Valley.

I went and slept in the Bush behind the Prison with some of the Blacks for three nights and in the daytime I walked about to see the place but the time seemed very long, for I did not know any one, when the Vessel was ready I went on board the wind being fair we run from the Coal River to Sydney which is sixty miles in nine hours.(p 66)

One thought on “John Brown’s Diary”