The “Plan Shewing the Shifting Sands” by John Edward Newell Bull,  on 4th August 1850 was recently provided by Mr Charles Martin. Courtesy of the State Library of New South Wales, the plan displays an insight into Newcastle’s past problems with the shifting sands that threatened to engulf the town.

The Select Committee of the Legislative Council, appointed on the 15th June, 1852, “to inquire into and report as to the best means of preventing the injuries likely to arise to the cities of Sydney and Newcastle by the influx of sand from the neighbourhood of those cities,” recommended the sum of £250 be granted towards reclaiming the Sand Hills. The also suggested that “two fences or scrubs of brushwood be erected from twenty to thirty yards apart, parallel to the beach, a little above high water mark, from six to ten feet high, sufficiently stable to stand the force of the strongest gales, and to protect from the trespass of cattle the space they enclose.” (Read the transcription by Jen Willetts of the report by Edward Flood, Chairman in the Maitland Mercury here  “Sand Drifts at Newcastle 1852“)

Back in 2004, whilst on the hunt for the Convict Mines of Newcastle in New South Wales State Records we came across the design for the fence that would be erected to hold back the sands. 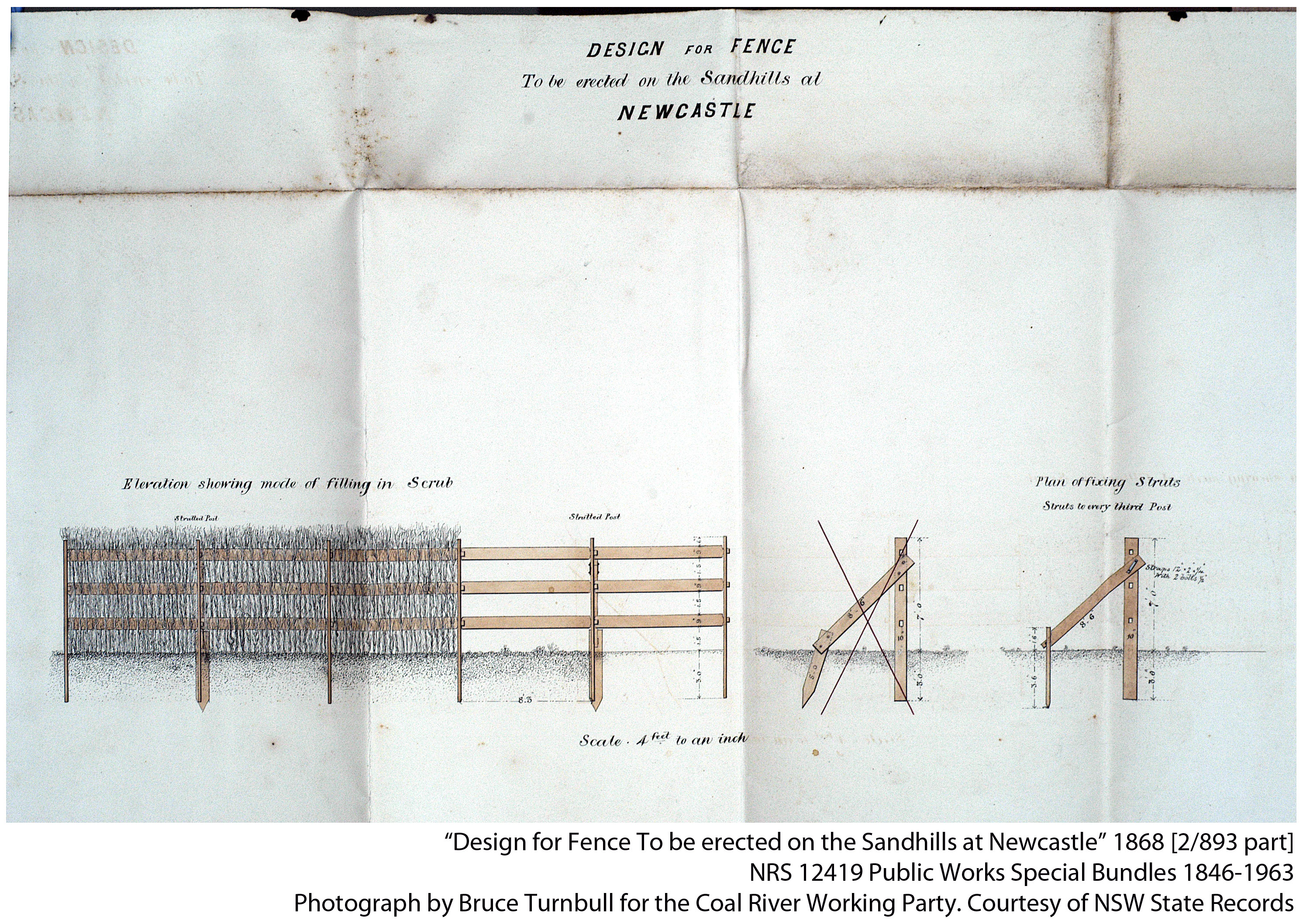 This provides a wonderful example why we need our coastal bush regeneration works to continue.

According to Russell Rigby’s research, there were 2 main areas of active sand dunes and drifts in the 19th century:

– northwards from Newcastle Beach to the harbour (the “Sandhills”) shown on the attached 1851 harbour chart – the sand-drift later extended to at least the Lumber Yard Site near Watt St, and  into the harbour affecting the navigation channels

– inland from Bar Beach/Merewether Beach. The Bar Beach dunes reached as far as Darby Street and threatened to block the roads several times up to about 1900.

Both dune systems were partially stabilised using brush fences. The sand from the Bar Beach/Merewether dunes was used by the Australian Agricultural Company (AACo) and Burwood Estate to reclaim swampy ground in the Cottage Creek drainage system on their properties around Hamilton and Merewether.

The painter Conrad Martens on one of his visits to Newcastle painted the sand drifts as part of a Newcastle landscape on the 16 May 1855. His painting clearly showing the sand dunes and brush fences.

The plan above is held in the Noel Butlin Archives at the Australian National University (ANU) and shows the proposed subdivisions by the AACo in or about 1856 in what is now Cooks Hill and Hamilton East, south as far as the boundary of the Company grant on Glebe Road. The main drainage of Cottage Creek is shown, but much of the surrounding low-lying land had to be reclaimed with mine refuse or drift sand from Bar Beach before it could be sold. Additionally some of the land would have been affected by mine subsidence.  The AACo subdivision and land sales continued through until at least the 1920s.

There are also much older dune systems around Cooks Hill, and on the slopes of Newcastle Hill, which are sometimes encountered in  geotech investigations for new developments. Some of these old dune systems are reported to be at least 15m deep. The older dune systems were not active in the 19th Century, and are thousands of years old, formed under different climatic and sea-level conditions. Laman Street  appears to be along the crest of one of these old dunes, and the dunes around Cooks Hill/Newcastle West are also likely to be sites of aboriginal camps and burials (e.g. Parry St near No.1 Sports Ground) potentially dating back more than 7000 years.

See the 1887 Knaggs Map for an illustration of this ancient dune system that enveloped the Newcastle landscape, and currently sits under the roads and bitumen of the present day City of Newcastle.

3 thoughts on “The Shifting Sands of Newcastle”