NAIDOC Week 2022 is celebrated across the country and this years theme is Get Up! Stand Up! Show Up!

Special Collections at the University Library is celebrating NAIDOC week by sharing rare footage of the first raising of the Aboriginal flag above Newcastle City Hall on 10 July 1981.

This historic footage was located amongst recently digitised NBN news footage, and a story researchers have been trying to locate for years. Thanks to Lillian Eastwood for her research she was able to confirm who the speaker was on the day – Mr Harry Brandy.  Many believe the flag raising ceremony took place in 1977, this footage may confirm it was a few years later in 1981.

To our delight we were able to speak with Harry Brandy and share the footage with him.  He advised the event was of great importance to local Aboriginal people and says it may have been the first time an Aboriginal flag had flown above Newcastle City Hall. 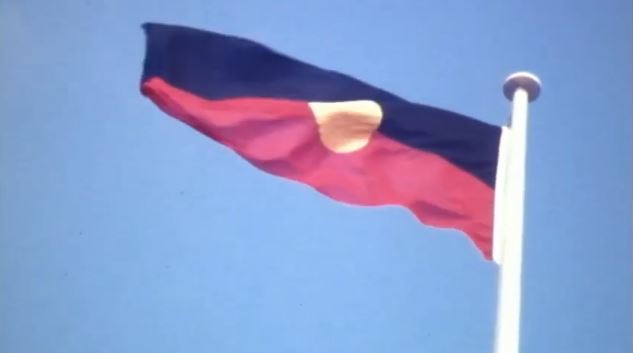 Harry Brandy was thrilled to watch the footage, saying it took him back to the campaigns and advocacy done by local Aboriginal communities in the 1970s and 80s. Harry was President of the Awabakal Co-operative and recalls the community being very active, calling for a national day. He is proud of their achievements and has fond memories of Lord Mayor Joy Cummings who was a strong advocate for Aboriginal rights.

What is evident is that the Aboriginal community were initiators and collaborators on having a national day, not passive recipients of goodwill.

Research shows that Marilyn Rose, Secretary of the Awabakal Newcastle Aboriginal Cooperative forwarded a letter on behalf of the Board of Directors to Ald. Cummings dated 27 May 1981. A motion had been tabled at a meeting of the Newcastle Aboriginal Support Group on 20 May to formally write to Council and request that the Aboriginal Flag be raised over City Hall during National Aboriginal Week from 6 July to 10 July. Attending the meeting were Awabakal Board Members, and Ald. Morris and Manning. Council resolved on the 30 June to fly the Aboriginal Flag.

Although the above NBN footage and Newcastle Herald article dated 11 July 1981, provide archival evidence the flag was first flown over the city of Newcastle in 1981 there is anecdotal testimonies that situate Ald. Cummings as being the first Lord Mayor to fly the Aboriginal Flag over a City – that local Aboriginal community representatives approached Lord Mayor Ald. Cummings in 1977 to fly the Aboriginal Flag and that the flag was flown.

‘National Aborigines Day’ in 1977 was on the 8 July and question remains whether Alderman Cummings was involved in an earlier Aboriginal Flag raising event in 1977.

“The first raising was done without fanfare or pre warning. Mum and the Bishop, in concert with the Dean of the cathedral, decided they would raise the flags simultaneously at 10.00 am at the commencement of NADOC day. A powerful gesture by two of the cities leading institutions. It was a small affair by any account in those days, not the massive weekly celebration it is today. My belief is it was 1978, as this was Alfred Holland’s first year as bishop. He was known to be progressive in regard to women’s rights and indigenous rights. It was an audacious thing to do, and they were quite prepared to carry the flak afterwards. Mum knew that the tent embassy in Canberra flew the flag and a town square somewhere but no public buildings. I remember making a special trip to town just to see it. As it turned out there was less flak than anticipated, and most people were proud that their city had achieved a first. Because the media didn’t know about it in advance, it didn’t create much of a stir.”

As time went on the flag was flown each year and NADOC day became NAIDOC week.

I think the 1981 celebration in Civic Park and the wonderful NBN footage was also the occasion of the first civic reception Mum put on for all Worimi and Awabakal people, men, women and children at city hall. It was a big fully catered event and I remember John Heath, when he presented Mum with the Wollotuka Prize some years later, referred to how important both the flag raising and the reception was. He said, “that day every little Koori kid owned city hall”. Mum was also a member of NASG, founded by Jack Doherty, a marvellous supporter of aboriginal people. For many years, until she died, mum was a contributor to the Jack Doherty University Scholarship fund. “

The question remains unresolved as to the date that Ald. Joy Cummings as the Lord Mayor of Newcastle enabled a process for the Aboriginal Flag to be flown either on City Hall or over the City of Newcastle for the first time. Further research with various lines of inquiry is needed to substantiate the date.

Research of this event is very much a work in progress to draw out as much information from community to substantiate a decisive date of when the Aboriginal flag flew over the city of Newcastle.

If you have any other information, photos, testimonies from anyone who attended the flag raising in either 1977 and 1981 we would love to hear from you.

Many thanks to Lillian Eastwood and Harry Brandy for their research and contributions to this story.