We congratulate Gionni di Gravio UON Archivist on receiving an OAM on Australia Day 2020, it is a wonderful recognition of the years of hard work and dedication towards preserving the region’s history.  We are very proud of his achievements.

Gionni has been committed to preserving the region’s cultural heritage and making archives and cultural sources accessible to global audiences and is a strong advocate for regional communities and institutions. He has also been a strong advocate supporting Aboriginal history.

Initially trained as a Metallurgist working at the Newcastle steelworks before joining the University of Newcastle Archives in 1996 and completing a B.A. (Classics), and Grad Dip. Info Science (Archives and Records). He has pioneered low cost useful methods and technologies to make archival treasures freely accessible to the wider world.

Gionni is a visionary who wants to see the next generation of creative ‘workers’ in new industries associated with the GLAM sector (Galleries, Libraries, archives and Museums). He founded the UON’s GLAMx Living Histories Digitisation Lab in 2017. He sees the intrinsic value of archives and cultural sources to better understand the world we live.

In his role at the university he has inspired and supported many students, academics and many of his colleagues. 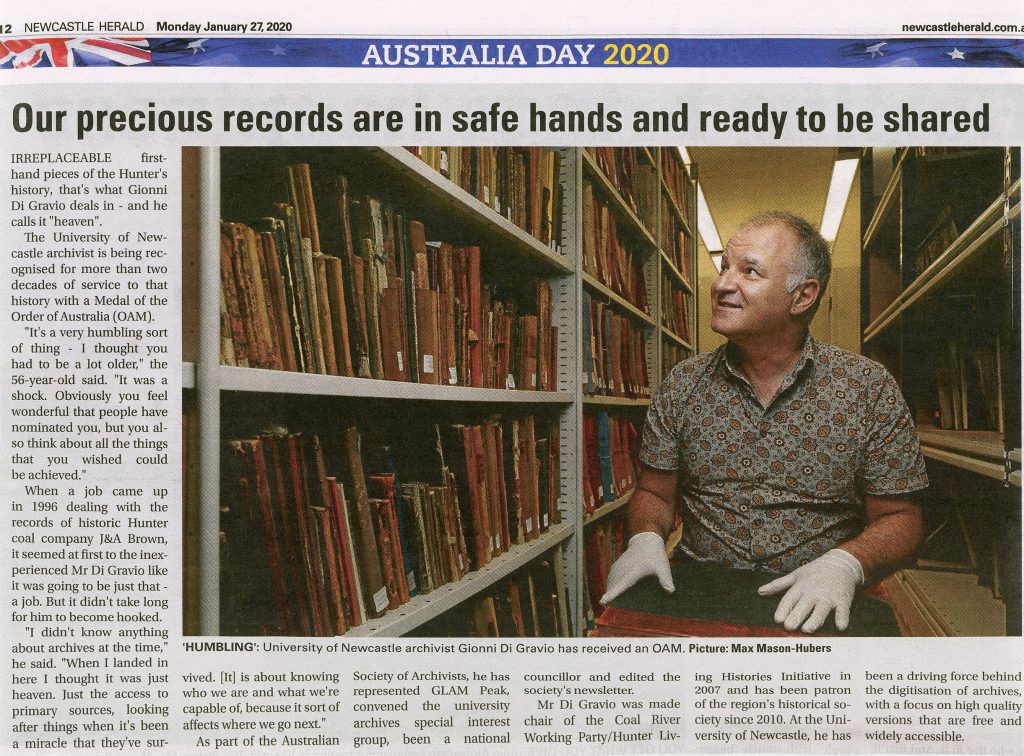 Gionni is an exceptional networker and very generous in sharing his knowledge and expertise as an archivist with the wider community.

Again we congratulate Gionni on receiving this very prestigious award.

The following are a few examples of Gionni’s COMMUNITY OUTREACH & ADVOCACY :-

2014 – Save the Art Gallery Redevelopment Proposal

2015, May – Historian offers to clean up derelict Post Office himself.

2015, December – “Newcastle, you need to celebrate your convict riches more”

2017, February – Community heritage groups at risk of becoming history due to changes in technology.

2017, May 9 – Gionni Di Gravio at the Newcastle Hunter Studies Symposium

Letter from Gladys Berejiklian, MP Premier of New South Wales congratulating on Medal of the order of Australia. 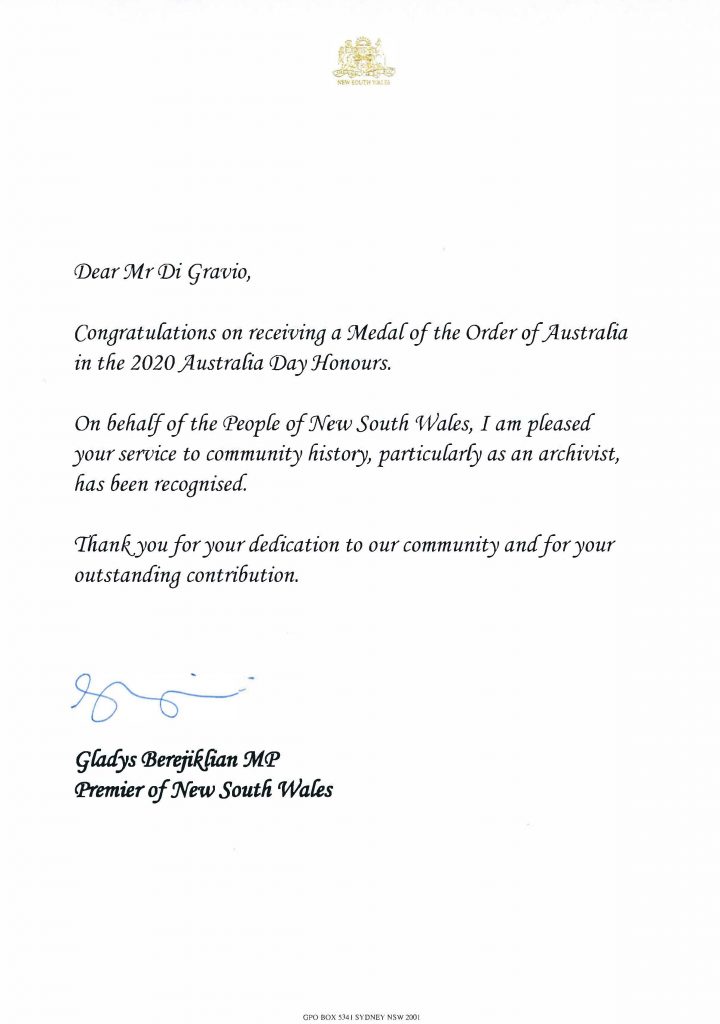 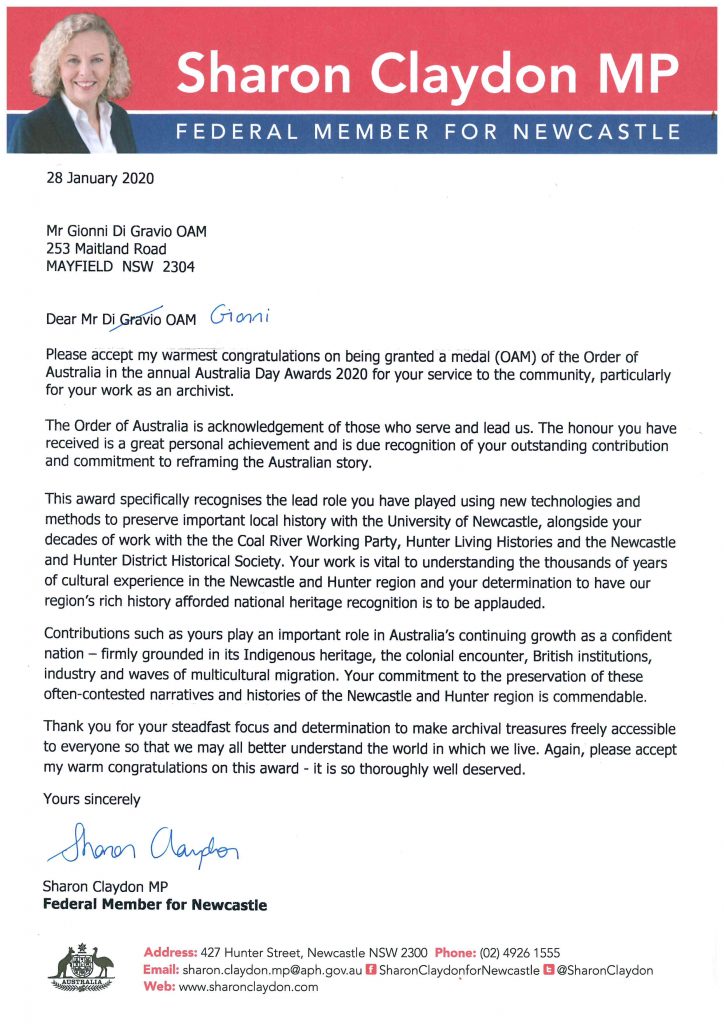 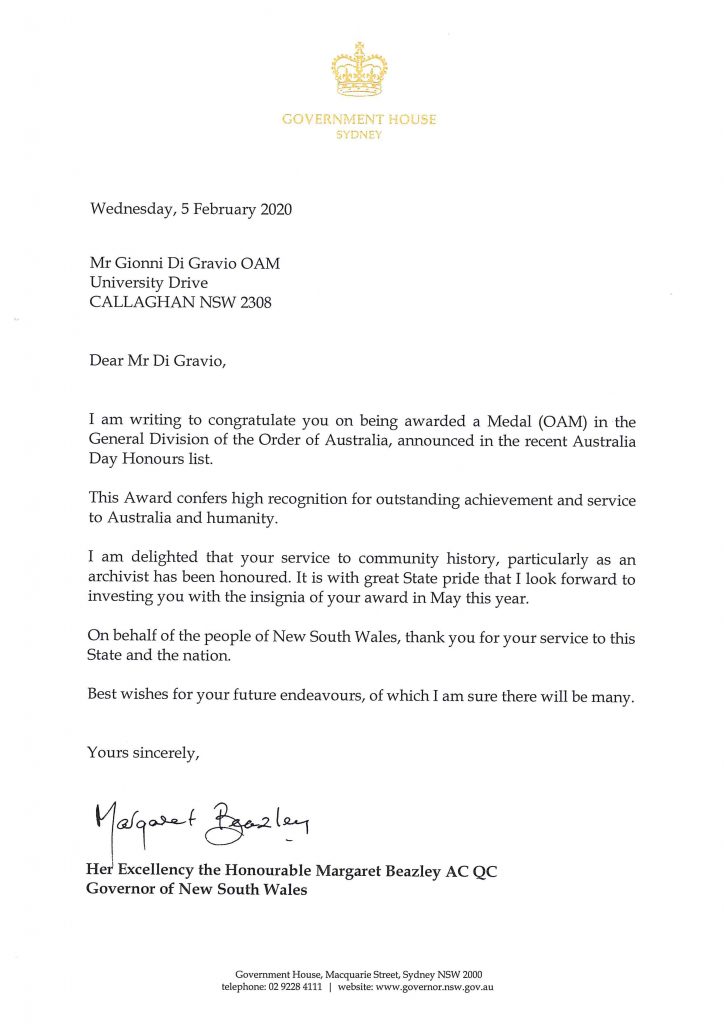 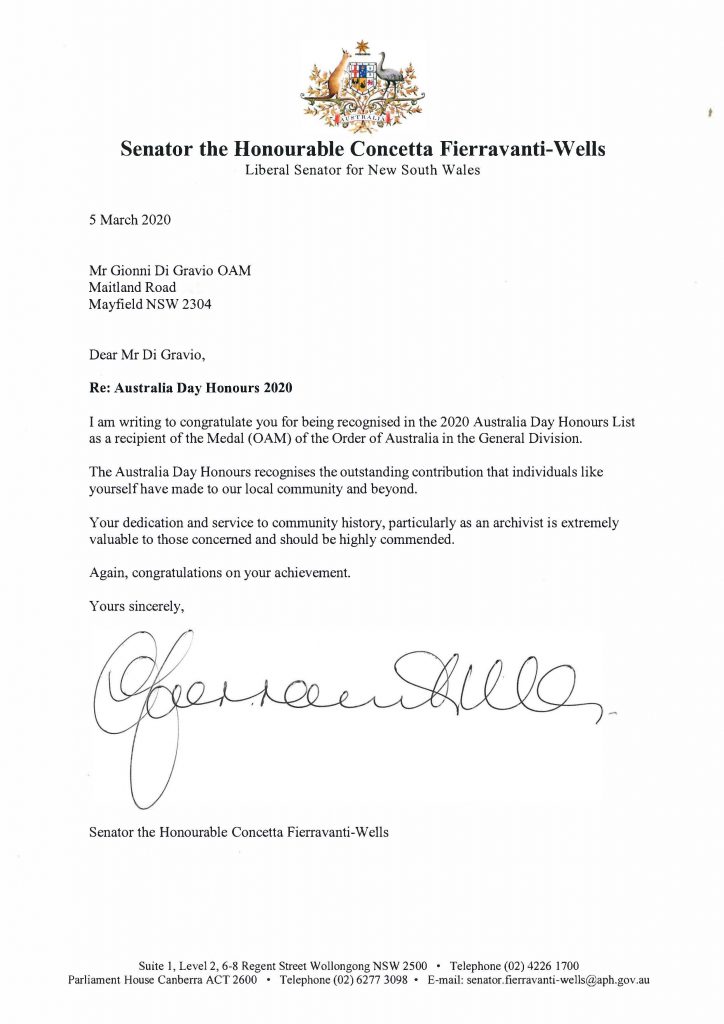 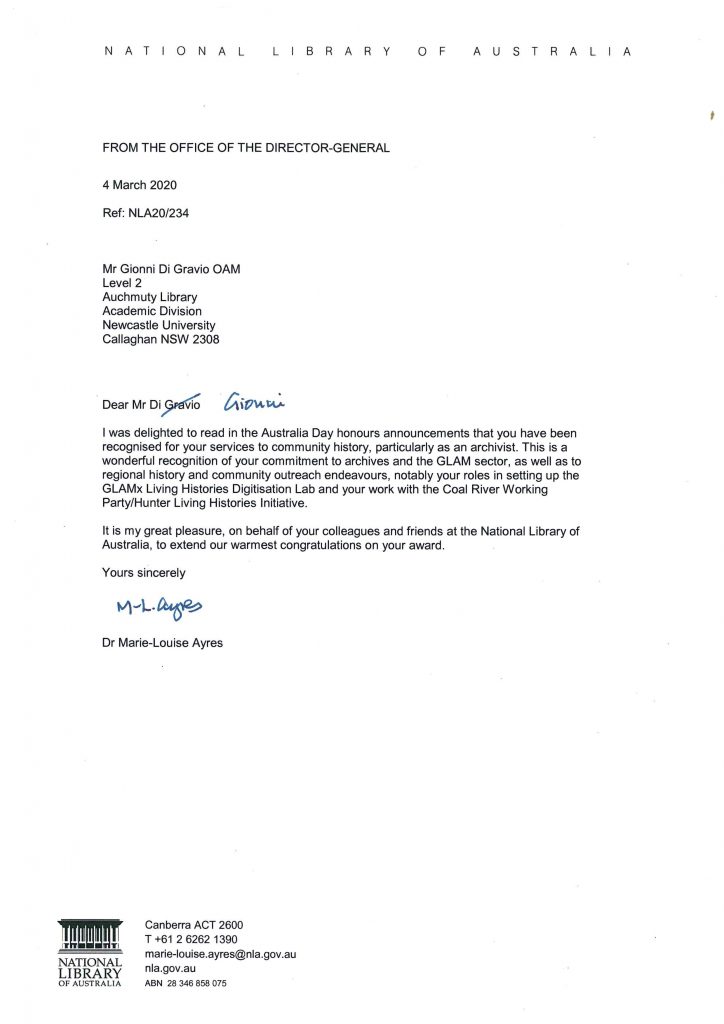 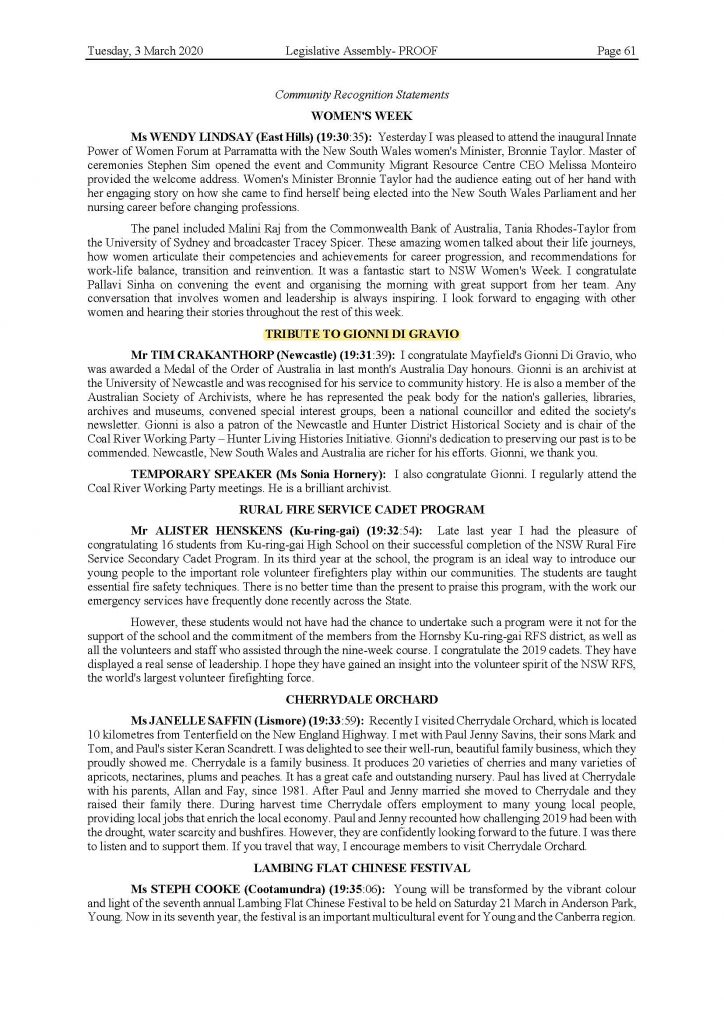 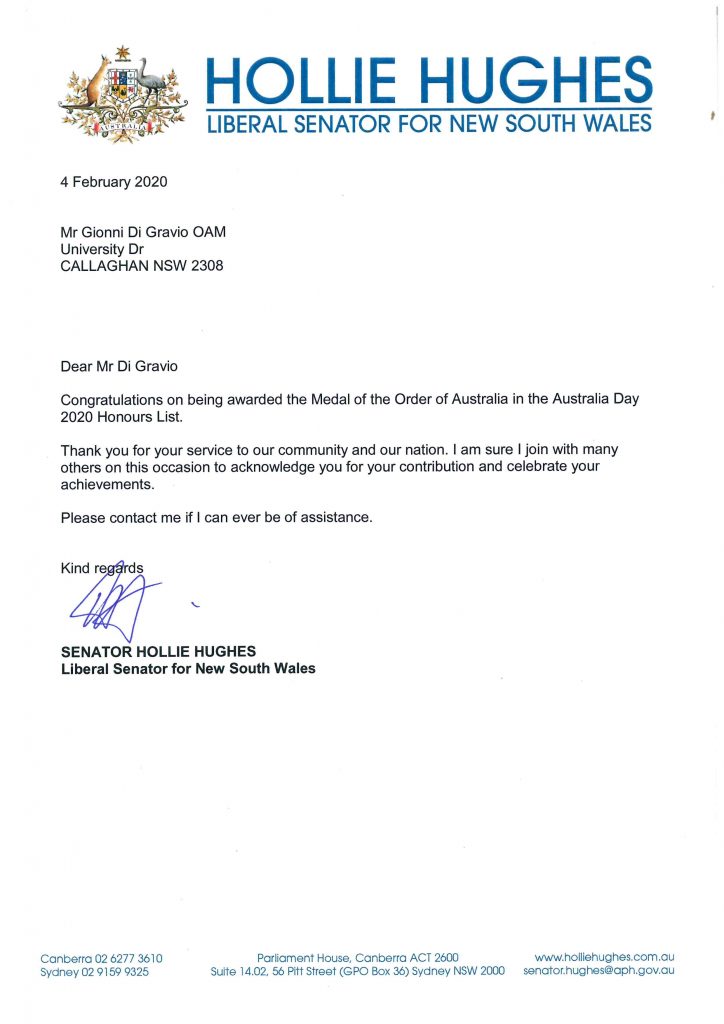 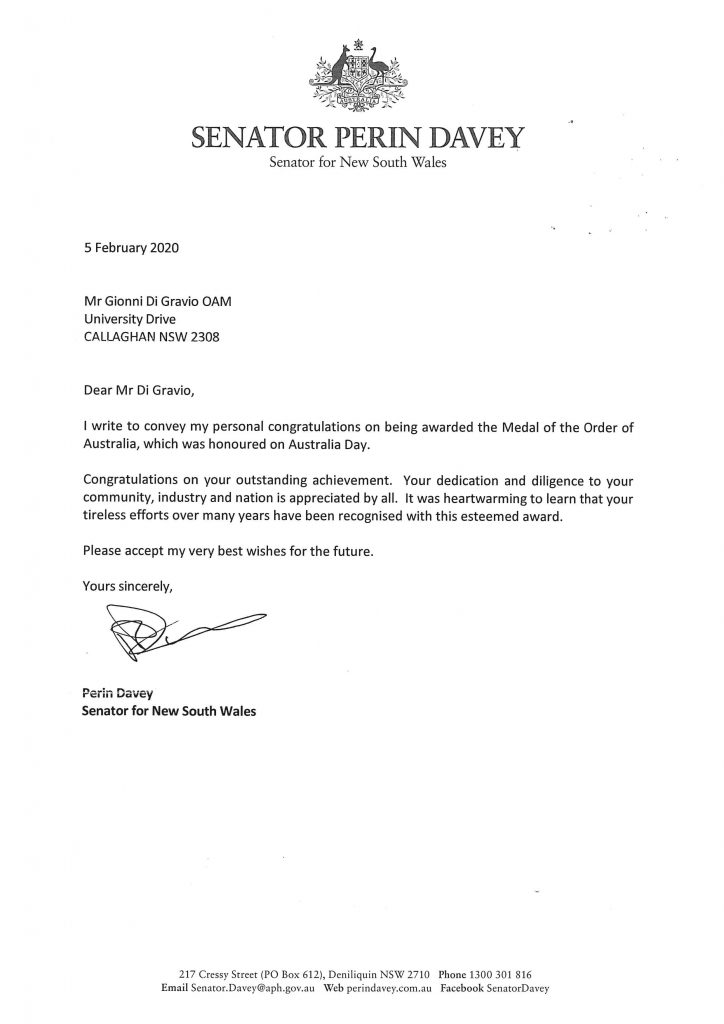