Late last year a project began at the GLAMx Lab to completely digitise, document and eventually make public an entire collection of one program from within the NBN Television Archive. That program was Country Report and it is now available to the public eye.

Country Report was a half hour program that aired on NBN from approximately 1988 to 1993 for regional viewers in the Hunter Valley, Central Coast and the Manning Valley. Country Report focused on rural and regional issues for ‘the man on the land’. 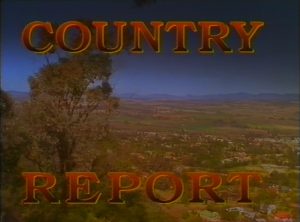 Stories from the program vary greatly even within the defined setting of rural Australia. From local field days at Tocal to the streets of Tamworth and the Country Music Festival. The issues that plague the rural lifestyle such as livestock diseases, noxious weeds and plants, natural disasters such as floods and drought. All of these and other stories were brought from around the state and occasionally further away straight to the televisions and homes of those that needed to know.

In amongst all these stories there was still some themes that stood out and appeared quite frequently across the 50 tapes that were digitised in this collection. The Australian Wool Crisis of 1990 that decimated the industry and cost the economy billions. (Further reading: Supply and Demand the Wool Crisis). I only learnt about this piece of Australia’s economic history through watching these tapes.

Or closer to home at Port Stephens the battles over the Oyster growing industry and the fight against the government to make Pacific Oysters legal to farm and sell in N.S.W. Oysters that were legal to grow in other states and imported could be bought and eaten in Port Stephens but the farmers right there were not allowed to do the same. When the government relented and allowed it they placed a levy on the farmers that would have driven them under. The battles continued. Again this is another piece of Australian and local economic history that I knew nothing about.

This collection while not vast still has depth to it and its videos show us some issues and stories that otherwise would not have been part of a usual nightly news that we still enjoy today. It is a nice piece of NBN’s history and a good starting point to show the public what we are going to achieve with the NBN Television Archive as a whole.

One thought on “Country Report – An NBN Television Archive Production”