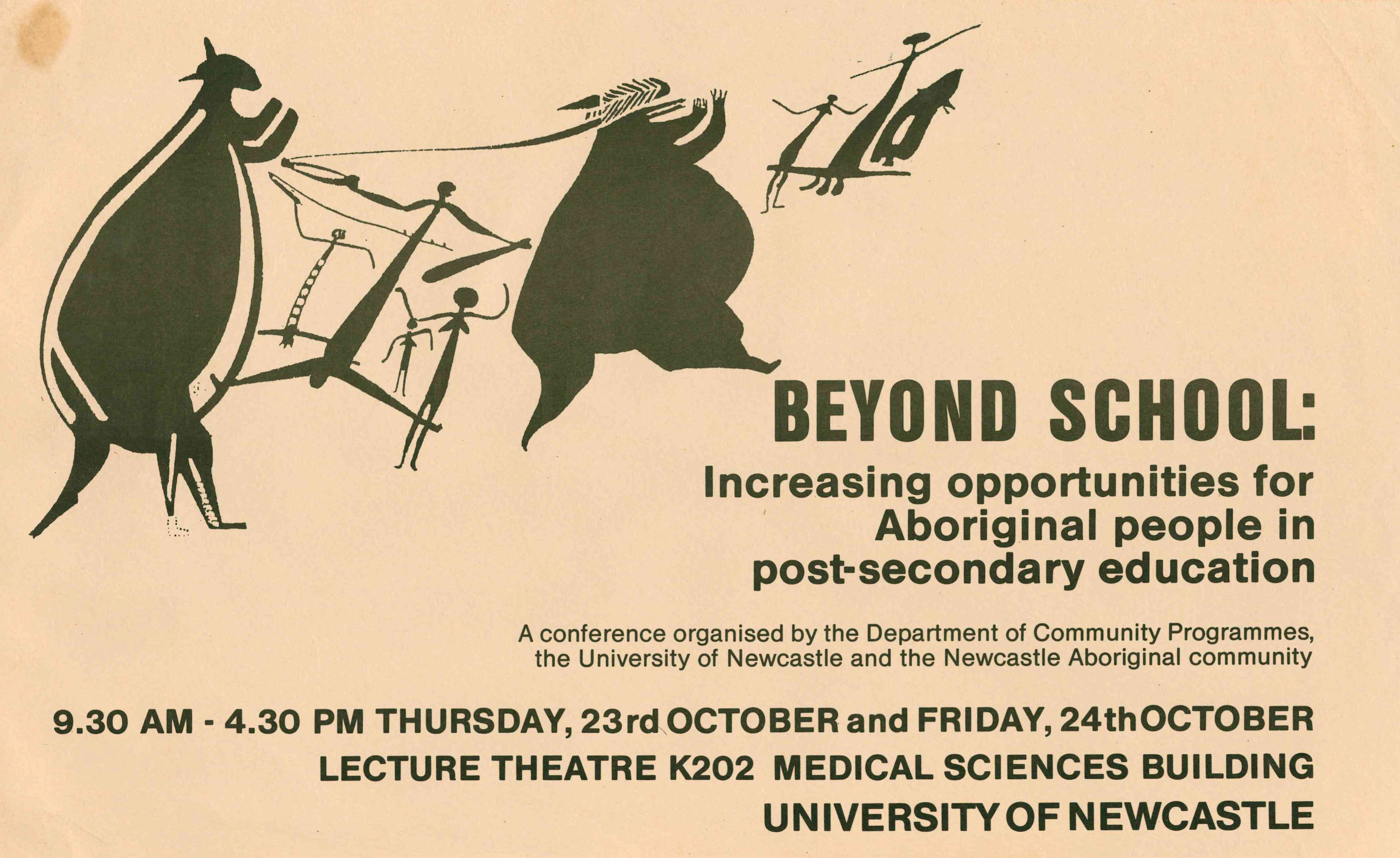 “Beyond School: Increasing Opportunities for Aboriginal People in Post-Secondary Education.”

This was the title given to a conference that was planned and held at The University of Newcastle, Australia in October 1986.

Organised by Ms Margaret Henry (Senior Lecturer in History at UoN), in conjunction with Mr John Heath (Lecturer in Aboriginal Studies at UoN), the conference saw over 100 Aboriginal Delegates, mainly from throughout NSW & the Hunter Valley, come together to discuss opportunities available to Indigenous school leavers and those seeking to further their education.

Held over two days (23rd & 24th October) the conference was a mixture of lectures, workshops and site visits to Aboriginal institutions both on campus at UoN and off campus in the community.

The conference ran from 9:00 am – 4:00 pm both day. Topics discussed included: Education opportunities beyond school, the need for more Aboriginal professionals. Listen to conference recordings below. The speakers were all Aboriginal leaders in Education in their communities.

(WARNING: Aboriginal and Torres Strait Islander listeners are advised that the following audio recordings may contain voices of people who have died.)

10:00 am – ‘Beyond School’ – Professor Eric Wilmott, Head of School of Education at James Cook University.

3:30 pm – ‘The Need For Aboriginal Professionals’ – Dr Eve Fesl, Linguist and Director of the Aboriginal Centre at Monash University

In addition to the lectures the conference also organised workshops, and other activities both in and outside of the University, such as dinner at the Awabakal Aboriginal Co-operative, a visit to the Aboriginal Enclave at Newcastle College of Advanced Education. In addition there were also question and answer panels.

It was noted at the conference that in the School of Medicine at The University of Newcastle, they had the highest number of Indigenous undergraduates in the school, and had graduates who had become quite successful in the medical field. Two notable graduates are:

Dr Sandra Eades: a Noongar physician, researcher, & Professor who was the first Aboriginal medical practitioner to be awarded a Doctorate of Philosophy in 2003. She was also  recognized as the NSW Woman of the Year for 2006.

Dr Louis Peachey: a Girimay man who is the Senior Medical Officer at the Atherton District Hospital, where he works as a Rural Generalist. He is also the founding President of the Australian Indigenous Doctors Association.

OTHER SOURCES OF INTEREST

In loving memory of Helen Margaret Henry, (1931-2015). A much loved and missed Novocastrian Identity who’s reports and papers left behind were invaluable and helped make this report and the Soundcloud files possible. The zeal, energy, belief and passion she invested in not only the people of Newcastle, but Newcastle itself will never be forgotten. Rest in Peace.