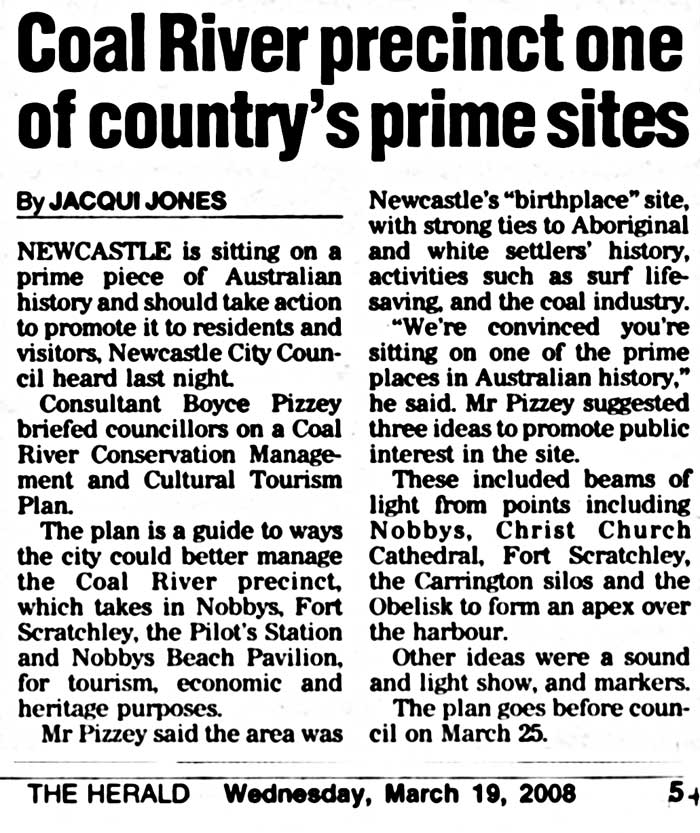 Newcastle University Archivist Gionni Di Gravio discusses the soon to be released Coal River Precinct Walk, the draft plan of management for the Coal River Precinct, and its implications for the future of Newcastle’s cultural experience, especially its night life.

Today I’ve brought along to the 1233 ABC our soon to be released Coal River Precinct Walk brochures that we have had produced in association with the NSW Heritage Office.

You can either pick up one from the Visitor’s Centre, Lock up Museum and other tourist and historical establishments across the region or download a copy here: Coal River Precinct Walk Brochure

The Coal River Working Party are also building a ‘Coal River Time Machine’. We would like to build a ‘time machine’ to transport people into our geological history, Aboriginal past, colonial world and then into a series of possible futures as part of an conceptual exhibition. We are meeting on Wednesday to begin working out the specification.

Here is a short story related to the early history of Newcastle that is largely forgotten concerning an early commandant of Newcastle, Corporal Wixstead. Most people have heard of him, and that he was recalled after a short time here in the early 1800s, but few know why. The reason was that he had got the whole town drunk. I believe this to be a solid case for the foundation of the future “Wixstead Arms” Hotel here that gives away free beer, what a tourist attraction for Newcastle that would make! Given that we are now seen (thanks to the 7.30 Report) as a binge capital, probably not.

Here are a couple of excerpts from a serialised history of Newcastle relating to the incident that was published in the Herald of 1897:

Corporal Wixstead arrived at Hunter’s River aboard the schooner Francis on the 23rd July 1801, accompanied by eight privates and 12 prisoners. He soon became unpopular through favouring some of the convicts more than others. A letter was forwarded to Governor King containing a numbers of charges against the Corporal as to the free indulgence of spirits and the bad behaviour of some women who had been allowed to accompany them. (Huntington, H.W.H. History of Newcastle and the Northern District. Dec 7, 1897 Number XXXVI)

The Court of Inquiry into Corporal Wixstead’s conduct was held in October 1801, presiding magistrates were Ensign Barrallier and Dr. Mason. The corporal was found guilty of imprudence, but acquitted of a charge of converting spirits to his own use. He had appropriated a large quantity of spirits, and had distributed the liquor at different times within a few days, giving everyone an equal share. What spirits remained he kept, agreeable to the wish of the soldiers and prisoners. At first every one of the settlers disavowed any knowledge of a letter to the Governor containing the charges, but the corporal found the culprit and brought him forward to deny the charges. The prisoners wanted a new commandant, but never contemplated they would get a worse task master than the corporal, whom the magistrates considered too quiet a man to govern such a set as he had to deal with. When they discovered that the corporal’s successor was going to be Dr Mason they applied to the corporal to know if he would join them in “jacketing” Mason should he prove too severe. The conduct of one of the women, Harriett Woods, was so incorrigible that even the soldiers had drummed her out of society. (Huntington, H.W.H. History of Newcastle and the Northern District. Dec 10, 1897 Number XXXVII)

This is a management plan for the Coal River Precinct which contains some inspiring ideas for interpretation which will involve in some part the work of the Coal River Working Party that we are undertaking on its behalf.

Back in April 2007 I attended a Council briefing on this plan and thought it was fabulous! Somewhere along the line Newcastle’s heart has been broken, and such proposals provide some hope that we can re-establish or re-consecrate a sacred place for Newcastle. Where better than its birthplace.

As part of the plan, the Coal River Precinct as a ‘Birthplace’ is a central theme, and it is thoroughly justified.

The songlines all start here.

Light is reminiscent of beacons, potent symbols in the Aboriginal as well as European races. Aboriginal people lit fires to announce the arrivals of visitors from other lands. The English have the fire beacons that warned of the advance of the Armada. They unite and protect land and its people. I would suggest we add another three light cannons from Sugarloaf Mountain, and the two ridge lines of Newcastle. Then the entire region is united in light that marks the spot of our birthplace.

In addition as part of our work at the University we have created a number of online historical resources and interlinked this material into a Google Earth addon. I envisage that this would make a great display if it can be project against a gigantic screen at the grassed amphitheatre site on the foreshore, just across the road from the camp site. At night, a gigantic Google Earth with projections of Barrallier’s 1801 map and other images of early Newcastle. We have also embarked upon building a ‘time machine’.

On March 13 The University of Newcastle’s Coal River Working Party announced that they would begin construction of a ‘real’ time machine. Quoting the late U.S. President J. F. Kennedy today, a representative said that they believed that:

“The University of Newcastle’s Coal River Working Party should commit itself to achieving the goal, before this decade is out, of transporting a Novocastrian into the past and into a series of possible futures of this city and region, and returning them safely to the present. We propose to develop a new device known as the Coal River Time Machine. It will utilise cutting edge Google Earth technology and employ overlayed historical maps, images and documents within a 3d virtual environment to transport occupants back into our geological past, and exploring the option of visiting possible future scenarios that are dependent upon how we act today. We choose to do these things, and the other goals, not because they are easy, but because they are hard.”

Getting back to the draft management plan, I hope that Newcastle can support it and get it up and running as soon as possible. It is so important, as Newcastle in the eyes of many has descended into a brutal hell of violence and vandalism. It needs a reinvigoration of heart and good will. This project can only help.

For some reason Newcastle’s night life has all become about getting completely off your face and smashing everyone and everything within a 2 mile radius.

This new proposal will be great for the city’s nightlife in providing some cultural substance to Newcastle’s evening experience and bring people out in an inspiring evening setting. Passiagiatta to Nobbys and beyond.

If our listeners could make it to the Council Chambers it would be greatly appreciated, it is vital that our Councillors support this plan and vote for its public display and eventual implementation for the Newcastle and Regional community.