WARNING: Clergy Abuse survivors, victims and their families are warned that the following historic post contains images and descriptions of a convicted perpetrator that may cause distress.

From: “News from the Underworld of Archives for January-June 2003”:

On the 10th July 2003 at 10am there will be a small ceremony in the McMullin Courtyard to mark the anniversary of the passing of Godfrey with the deposition of his ashes in the grounds.

The details are yet to be formalized, so if you have any ideas or wish to contribute to the proceedings please do.

Last month, with the help of Mim Woodland and Godfrey’s Executor, Laurie Tremenheere, we set out to find a suitable spot for Godfrey’s memorial garden in the University grounds.

We visited three areas; the first site was in engineering, just near the remains of the Corlette Fountain, which was under utilised and could accommodate a hedge maze.

The second site was down on the Scobie Heath, a very beautiful and tranquil place.

But the site finally chosen was in the corner of the McMullin Courtyard. 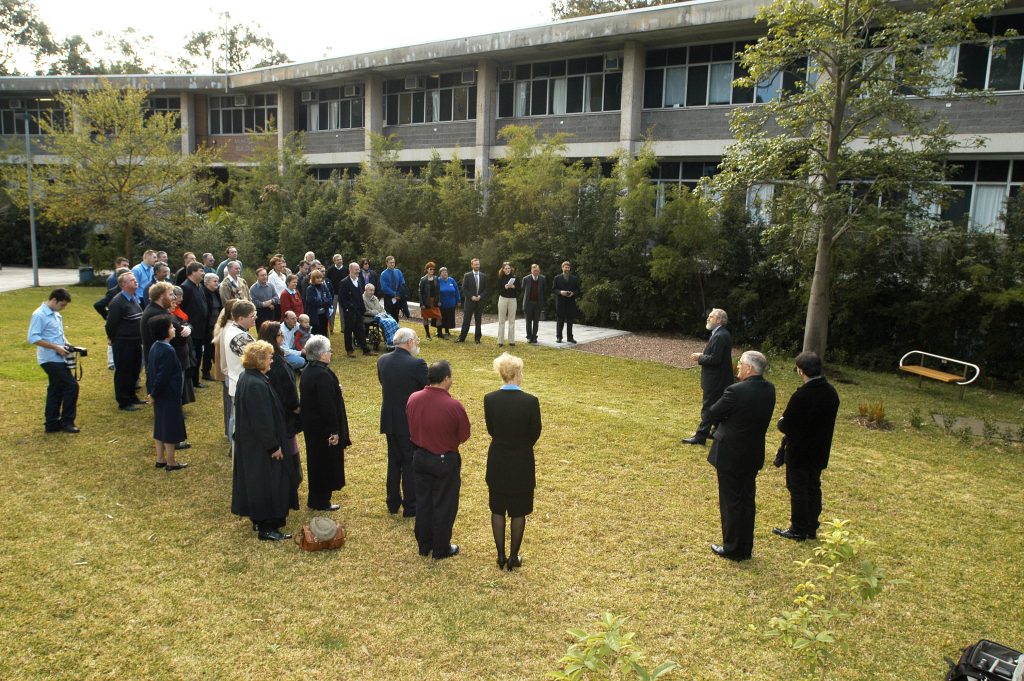 Mim and her team have prepared the grounds with hedge plantings and also constructed a silver seat with the plaque that reads:

Dr Bernard Curran suggested this piece of latin from Virgil to adorn Godfrey’s seat; these were the words that Godfrey wanted for the University’s motto.

Here is an excerpt from Bernie Curran’s Eulogy:

“For us, as we face the future, Godfrey Tanner gave us direction through another image from the Aeneid. At the end of Book VIII, the hero is presented with a shield on which Vulcan, the God with a knowledge of things to come (a role which Godfrey enjoyed – and which his portraitist in the Godfrey Tanner Bar tried to capture) had depicted the future of Rome. The hero, although he does not understand the significance of scene depicted, nevertheless shoulders the shield and with that the Fame And Fate of his descendants – famamque et fata nepotum. (Aen.VIII 731)”

We would also like to meet with bronze sculptor(s) who can create either a small part Godfrey part satyr figure, or a sitting Godfrey reading with a number of mythological figures (like Aeneas, Medusa etc) looking over his shoulder. The idea is that one day, one discovers by accident the Godfrey as Pan statue hiding in the bushes.

The other vision is a monumental 12+ foot high “Godfrey in the midst of speech” dressed in academic gown, (showing just a touch of hoof), in bronze to go behind the seat, hand resting upon doric column, at his base lies a bicycle wheel to signify the wheel of fortune (fata), Vulcan’s shield, and other mythical items. But at an estimated $80,000 we need one hell of a benefactor!”

From: “News from the Underworld of Archives for July-December 2003”:

On the 10th July 2003 at 10am a small ceremony was held to mark the anniversary of the passing of Godfrey with the deposition of his ashes in the grounds. The ceremony was held in the McMullin Courtyard, where a garden had been prepared in Professor Tanner’s honour.

The garden also contains a silver ‘seat of wisdom’ with a plaque that reads ‘FAMAMQUE ET FATA NEPOTUM’ meaning ‘The Fame and the Fortune of his Descendents’ from Book 8 line 731 of Virgil’s Aeneid.

The proceedings of the day included;

Professor Harold Tarrant read an excerpt from an obscure ancient Greek fragment on loss and consolation: A Passage for Godfrey..

The following are represented as the words of Prodicus the fifth-century B.C. sophist, as ‘remembered’ by Socrates, who is speaking to Axiochus in the pseudo-Platonic consolation-dialogue entitled Axiochus (366d-7b). The translation is that of Jackson P. Hershbell:

“What portion of a lifetime is without its portion of misery? Doesn’t a baby [boy] begin its life in pain, and cry from the first moment of birth? Certainly he lacks no occasion for suffering; hunger and thirst and cold and heat and hard knocks distress him, and he can’t yet say what the problem is; crying is the only way of expressing discomfort. When he reaches the age of seven, after having endured much physical pain, he is set upon by tyrannical tutors, teachers, and trainers; and as he grows older there are scholars, mathematicians and military instructors, all in a great crowd of despots.

…. After he’s free of all that, worries immediately steal upon him, and considerations about his career in life present themselves to him. And the earlier troubles seem like child’s play, the bogey men of babies, so to speak, compared with the later ones: military campaigns, wounds, and constant battles. Then old age creeps on you unawares, into which flows everything in nature that is mortal and life-threatening. Unless you repay your life quickly, like a debt, nature stands by like a money-lender, taking security, sight from one man, hearing from another, and often both.

…. And that is why the gods, who understand the human condition, give a quick release from life to those they hold in highest regard.…”

People were encouraged to farewell the Professor.