Story of an Angel – History of Newcastle’s mental health service

In 2014 I was giving a talk at the Newcastle branch of the Australian Federation of Graduate Woman about the history of mental health in Newcastle. I was describing the close association between the Newcastle Asylum that opened in 1871, and Stockton Mental Hospital established in 1910. What few realise is that there is a long history of mental health care in the Hunter, particularly associated with intellectual disability, the institution known as the ‘Newcastle Asylum for Imbecile & Idiots’ was the first hospital for the intellectually disabled in Australia. The terms ‘imbecile’ and ‘idiot’ are not used today in this context, however in the nineteenth century were used to describe intellectual disability. What came about during the discussion with the graduates was the discovery of a much more tangible link between the two institutions- an Angel. Before I continue with the story about the Angel the following background information puts in context how mental health services came about in Newcastle. 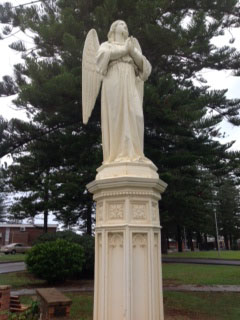 Government authorities in NSW during the 1860s began planning how to best care for the mentally ill and intellectually disabled. In 1868 Dr Frederic Norton Manning undertook a study of asylums worldwide to find best practice methods, and after more than a year away he produced a report that was described as “undoubtedly one of the most comprehensive, complete and authoritative public documents that has appeared on the subject of Insanity and Hospitals for the Insane.” (American Journal of Psychiatry) This report recommended separate institutions for people with mental illness and intellectual disability, another suggestion was that asylums be exposed to a southerly breeze, which both Newcastle and Stockton institutions are. The ‘Newcastle Asylum for Imbecile & Idiots’ was a public institution for people with intellectual disabilities, what makes this institution rare is that it was established quite early; it was the third public institution of its type in the world. There was no similar institution publicly owned and managed in the British Empire, it was a first in Australia and in Britain. It differed because the NSW system did not follow the British tradition of charitable and private care, instead government authorities directly provided care for the mentally ill and intellectually disabled. Although methods of care were influenced by models used in institutions worldwide, the private sector was not involved in establishing or funding the Newcastle Asylum in 1871.

The hospital has had many name changes and in 2014 known as the James Fletcher Hospital. Although authorities intended to admit adults and children with an intellectual disability when it first opened in 1871 this group did not come straight away, instead many socially disadvantaged, single ageing men were sent from Sydney where asylums were overcrowded. After a few years the asylum population began to stabilise and intellectually disabled people were admitted. By the 1890s, children as young as five and six years of age were relinquished into care, an economic depression in this decade made it difficult for families to cope. The admission of mostly intellectually disabled women and children continued well into the twentieth century. The institution at Newcastle was special; the community had a presence there, they were encouraged by Superintendent Frederick Cane to visit and were welcomed through the gates of the asylum. The community was part of care of the patients, here they participated in musical and sporting events, and as the “Newcastle Fountain Hospital” postcard shows the asylum was quite a pleasant public place in the 1880s. The opening up of asylums worldwide, saw increasing numbers of visitors to asylums, they were marketed as tourist attractions where amusements were shared between patients and the wider community. This notion of institutional tourism seems odd today because mental hospitals are very much private places, however in the late nineteenth century many public institutions, including asylums were tourist attractions.

Newcastle’s asylum grounds were promoted in the local press as a community friendly space which drew people to the site “ …not to be missed…No visitor doing the sights of Newcastle ought to miss the excellent institution….the picturesque and interesting surrounds, it would well repay a visit.”[1] “Hospital for the Insane,” Newcastle Herald & Miners’ Advocate (Newcastle) April 3, 1886.

What added to the promotion of local tourism was the interest in sites of civic activity, public participation, and trips to experience the natural environment. The railway into Newcastle contributed to the general boom in tourism. The 1880s and 1890s saw the beginning of growth in the colonial tourism market and with a Depression meant people were less inclined to take expensive overseas travel, instead staying ‘at home’. The beauty of the asylum surroundings were emphasised, particularly to visitors as the postcard and other photographs show.

The main objective was “not only beautifying the place, but removing as far as possible the barriers which were formerly so prominent”. “Asylum Grounds,” Newcastle Morning Herald & Miners’ Advocate(Newcastle) October 2, 1878.

Now this is where the Angel returns to the story. A statue of an angel is shown in the postcard, it stood on a high plinth at the end of the main avenue at the Newcastle asylum. Also shown is a decorative fountain and a field gun reflecting the earlier military use at the Domain. For many years I had been thinking about this statue, wondering how it come to be there, who put it there, and where had it gone. Did it still exist somewhere? Nothing has been found in the records, I had no clues about the statue until March 2014. At the dinner I was attending Jocelyn Caddies spoke up and said “I think I know where that statue is, it’s over at Stockton”. Jocelyn worked at the multi-activity centre at Stockton Hospital during the 1990s to 2005 and remembers seeing the statue of the Angel. Thanks to Jocelyn’s local knowledge I went to Stockton Hospital the following day, with little effort I located the statue standing in a central place, quite unassuming near the main car park. I stood there staring at the face of this Angel, I understood its history and how far she had come. It is as if the Angel had flown across the harbour to protect those who were transferred there in 1910, many of them were women and children from the Newcastle mental hospital.
photo

The statue has been standing for at least 120 years and is a tangible link between the two mental health sites, it represents government care provided to the intellectually disabled and the first institution established at Newcastle in 1871. But more importantly it represents the community, the presence the community has had at the Stockton Centre, a community that cares about the future of the place and its people. The state government in NSW plans to close the Stockton Centre and it is of no surprise that there are many people willing to “fight until their last breath” against the closure. There is a passion to retain this public facility because of its history- it’s been the major institution for the intellectually disabled in NSW for over a century.

If you have any further information about the statue of the Angel please contact Ann Hardy at ann.hardy@newcastle.edu.au 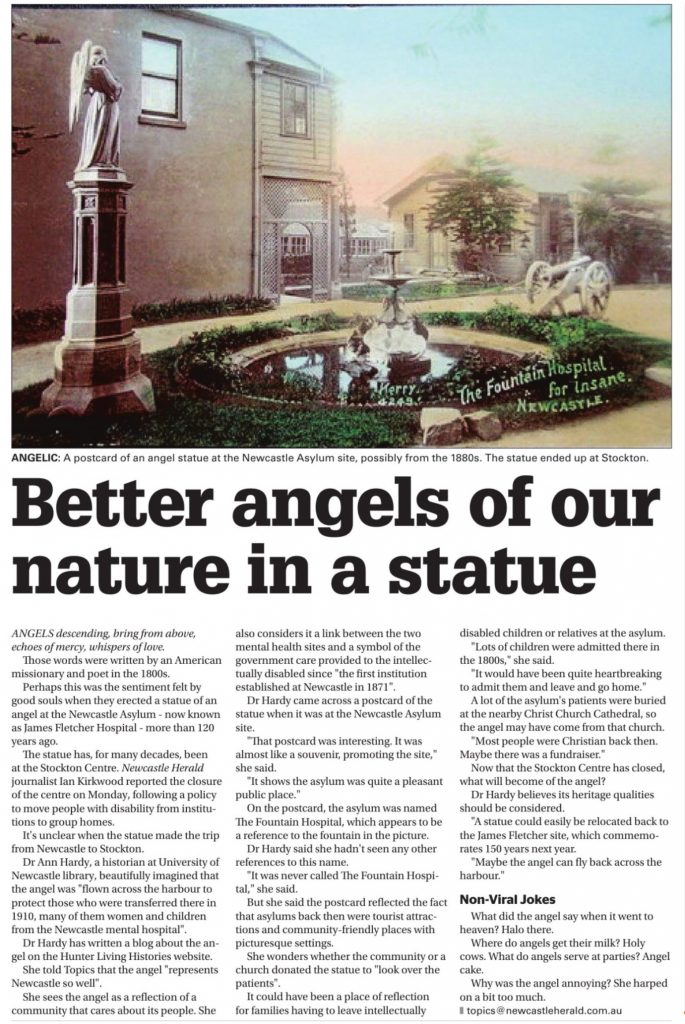 “Better Angels of our nature in a statue” Topics – Newcastle Herald, 8 September, 2020

Laila Ellmoos, Beneath the Pines: A History of the Stockton Centre (Sydney: Ageing, Disability and Home Care. Department of Human Services NSW, 2010).

This #WorldPharmacistsDay we are taking a look at