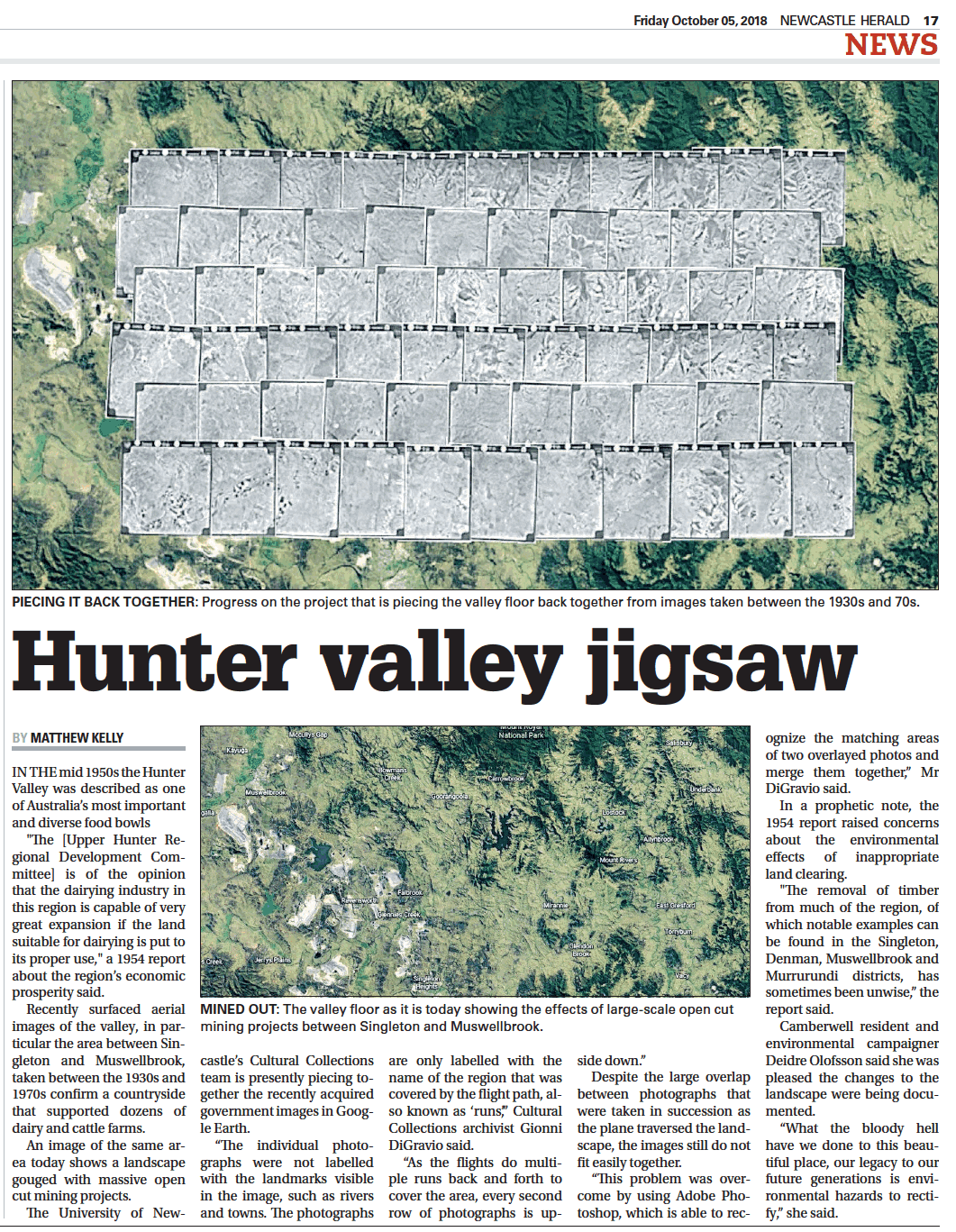 There has been an ongoing project in the GLAMx Lab at Cultural Collections to digitize a collection of aerial photographs that were donated to the Geology Department at University of Newcastle. As the aerial photographs have been digitized they have been made available to the public via the Cultural Collection’s Flickr site and  Living Histories repository. The photographs cover different areas of New South Wales, mainly within the Hunter Valley, and were taken at different times, from the 1930s through to the 1970s.

The collection contains hundreds of photographs and is a rich record of the Hunter’s landscape through the 20th Century, however, it can be difficult to search for images of specific locations. Some of the issues encountered during the digitisation process included:

To solve these issues the next stage of the project was to give the individual aerial photographs more context and meaning by merging some of the images together and overlaying individual images onto Google Earth.

By merging rows of photographs together that were captured as the plane flew across an area, we were able to create larger aerial images showing each individual image in context. The process of merging the aerial photographs has proved to be quite a challenge. Even though there is a large amount of overlap between photographs that are taken in succession as the plane traverses the landscape, the images still do not fit easily together like a jigsaw puzzle. The perspective across the images changes with the camera moving with the plane’s slight changes in direction and altitude, as well as the curvature of the earth. The result is that when the images are placed over the top of each other, the landmarks, e.g. roads or rivers, do not line up. This problem was overcome by using Adobe Photoshop, which is able to recognize the matching areas of two overlayed photos and merge them together.

Another way of presenting the images is to overlay them on Google Earth. We will be overlaying a series of individual aerial photographs onto Google Earth and will make the Google Earth files available to the public via downloadable KMZ files. This will allow the aerial photographs to be positioned on top of Google Earth’s current aerial imagery to give it geographical context and also allow the landscape to be compared through time. As photos and maps of any particular area from different times are digitized we will be able to overlay them all onto Google Earth allowing the viewer to toggle through the images.

If you have Google Earth on your computer you can download a .KMZ file (870MB KMZ File) of the aerial photographs from the 1967 survey of the Camberwell district covering Singleton and surrounding areas overlayed on to a modern Google map. Note: Please be aware this a large file at 870MB.

There is still a lot of work to do, however, the aerial photograph collection is a valuable historical record of the Hunter Valley’s landscape and it is very exciting to see the project progress and become more accessible and searchable on-line to a global audience.

One thought on “Mapping the Aerial Photographic Archive”