The University of Newcastle’s Coal River Working Party have begun the search for the long lost gun powder chambers that secretly lie within the Nobbys Headland.

The following document outlines the story.

In February 1853 the original plan was to cut Nobbys down to 65 feet above the high water mark for the erection of the Light house. On the 26 February the Colonial Secretary suggested the proposed work might be expedited with the use of gunpowder. This was enthusiastically received by Lieutenant Colonel Barney and Gother T. Mann who on the  4 March 1853 agreed and embraced the idea of blasting the rock. By April Barney reports that work was underway to drive galleries into the headland for the planting of the explosives for the ‘demolition’ of Nobbys Island. Colonel Barney & Mann had planned three tunnels, and thought they may have needed a fourth.  However, it seems that only two tunnels were actually dug, both to a distance of 24 metres into the island.

This angered the wider Newcastle community who rallied under the leadership of John Bingle to save the Island from destruction. The tunnel excavation was stopped after Newcastle residents protested to the Government.

On what is perhaps the birth of the environmental movement in Newcastle, on the 22 November 1853 they sent a Memorial to His Excellency Sir Charles Fitzroy, the Governor General of the Australian Colonies calling for him to intervene and protect Nobbys Island. Another figure, known simply, as Mr Thorn enters the story, traveling to Sydney and is credited with finally convincing the Governor’s mind.

Colonel Barney was asked to explain, and replied that the Memorialists were under the misconception that they wanted to blow up the Island completely, when in effect they only wanted to remove 60 ft above the high water mark.

This sounds like a simple misunderstanding until we came upon William Keene (Examiner of Coal Mines) Stratigraphic sketch from Nobby’s Island Newcastle to Burwood, showing coal seams and their Order of Superposition. 31 May 1854. Photographed by Bruce Turnbull. Archives Authority Map No. SZ325 (Courtesy State Archives of NSW)

See the Detail 1 Nobbys Island, where he marks at the base of Nobbys the Chambers excavating for blowing up Nobbys’.

The Memorialists had a right to fear the destruction of Nobbys Island. John Dunmore Lang’s 1834 edition of “An Historical and Statistical Account of New South Wales” Volume 2 pp 89-90 says

“Some colonial goth, whose antipathy to interesting natural scenery be a sort of inherent or original sin, has even proposed to level Kobby’s Island altogether, on the plea of its having been repeatedly found guilty of taking the wind out of the sails of vessels entering the harbour. I trust, however, the colonial government will adopt the wiser expedient of erecting a light-house on its elevated summit ; for the island has surely been long enough at a penal settlement, to entitle it to indulge the reasonable hope of escaping decapitation-the last punishment of the law.”

It is interesting to note that Colonel Barney’s offsider in the Nobbys gunpowder plot was a fellow by the interesting name of ‘Gother K. Mann Esq’ Could Lang have been making an oblique reference to this individual? We would also like to thank Ann Hardy (Secretary of the Hunter Branch of the National Trust) and Mr Frank Maxwell for alerting us to the following two newspaper articles below. The second, ‘When Nobbys Was Tunneled’ (from Mr Maxwell) should provide the Coal River Working Party’s archaeological team working on relocating the tunnels with ample information to get their bearings.

When Nobbys was tunneled.
[Transcription]

Mr D. Williams, of Bondi, recalled recently an attempt that was made to drive a tunnel under Nobbys – the conspicuous headland at the entrance to the Hunter River.

This is his story – I was for years employed in the Harbours and Rivers Department. At the time I speak of, Mr. Percy Allan was Superintendent of Public Works, and the foreman engineer under him was Mr. John Walker. It was popular talk that tunnels had been driven into Nobbys base. Mr Allan wished to know what they were, and whether they were driven above or below the coal, which is still to be seen in the “outcrop” there and in the hills running along in a southerly direction. I accepted the job to find out, being a practical miner. Armed with a pick and candles, I had little difficulty in entering the tunnel driven from the eastern face of Nobbys. After I “got my eyesight” I proceeded to the face, sounding the roof as I proceeded. On the face of the tunnel there had been inscribed “Lieut. Shortland,” the name of the discoverer of the Coal (Hunter) River. Each side of the tunnel face chamber was constructed. The end of the drive resembled the capital letter T. Ample space was provided to pack explosives and other materials. I had to dig myself into the drive, going into Nobbys from the south. It was almost blocked up at the entrance, but inside it was constructed and finished off just the same as was the other drive from the east. I found that the drives were driven in the same bed of rock, above high-water mark – about 4 ½ ft. high and 5 ft. wide. The drives were damp, but there was no water on the floor of either. I saw no coal. That mined from Nobbys was probably got from a tunnel down on the Newcastle side of the knob.

The tunnels originally excavated in 1853 were still visible at the turn of the 20th century before being buried in debris and rock falls. 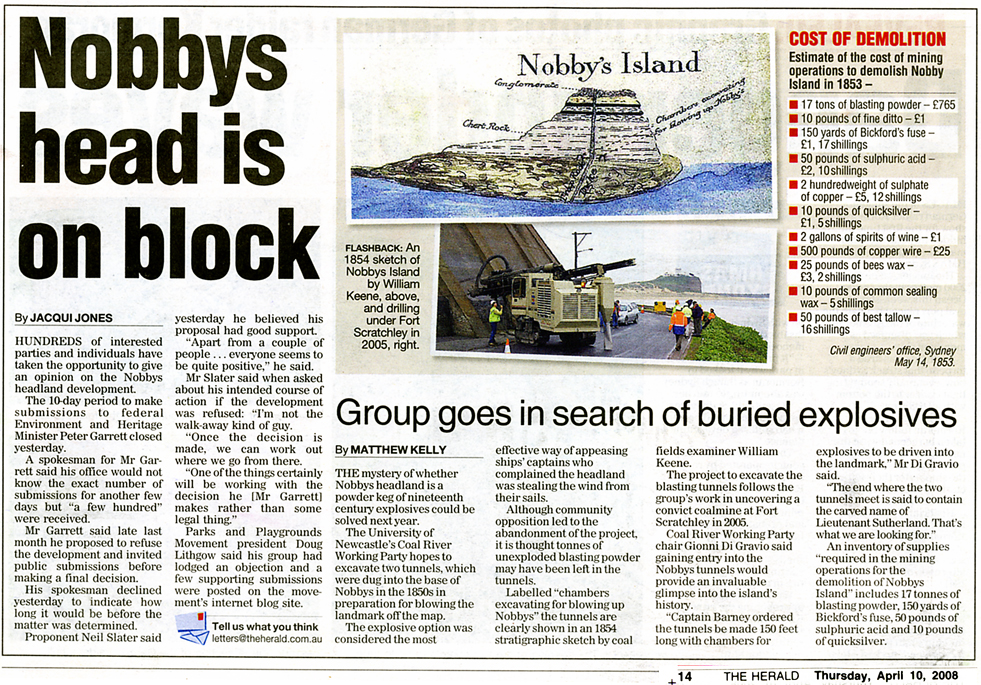 3 thoughts on “Journey to the Centre of Nobbys”